Whenever you mention the word ‘light novel’ to someone their first thought is usually a fantasy isekai title, like Sword Art Online or Re:Zero. It’s not often we’re treated to books that don’t fit into that genre, but today we have a something a bit different – the murder mystery The Dark Maidens.

The story begins with a gathering of the Mary’s Academy for Girls Literature Club on a stormy night. Their president, Itsumi Shiraishi, has been murdered and the girls have come together to work out why and how their beloved friend died. To figure out the truth they’ve each written a short story about their relationship with Itsumi and the events leading up to Itsumi’s final moments. When it comes to light that the girls’ friendships weren’t all sunshine and rainbows, danger could be closer than anyone could have anticipated…

There are currently six members of the Literature Club, so throughout this light novel we’re treated to six short stories. While these stories do overlap with each other in places, they’re largely standalone tales detailing the lives of each student and why Itsumi chose to invite them to her club. Each story starts out innocently enough but by the end it’s clear that every member of this club had a grudge against Itsumi and easily could have plotted her death. The book is written in a way to keep you guessing right up until the end through the use of these stories – and I think it does this well – but I also have unquestionable issues with it.

The problem I faced is that very early on I figured out who the culprit was and this soured my experience – especially when I discovered I was right. Certain patterns in the writing surrounding the culprit were so obvious that I picked up on them immediately. I’m not entirely sure it was bad writing – in some ways the cues were a clever trick – but I’m disappointed that I saw through the mystery so early on.

I’m an undeniable fan of mystery stories and I’ve read, watched and heard many of them (especially western classics like Sherlock Holmes and Agatha Christie’s many books), so I wonder if I’m just too familiar with the quirks of the genre. This leaves me conflicted because I also wonder if the problem was me or The Dark Maidens itself. Would others see through its ploys as quickly or was I just lucky? It’s tricky to say but I lean towards the former.

Beyond that one fatal issue, The Dark Maidens is otherwise very well written. The characters do fall into typical archetypes (the scholarship student who feels she doesn’t belong, the foreign exchange student, the perfect one, etc.) but underneath the generic personalities they’re actually very twisted and ruthless, which brings a spark to them. Even despite guessing the culprit earlier on, I really did enjoy reading the characters’ stories as it was fun to see how the club came to be and how twisted all of these girls really are.

This book is written by Rikako Akiyoshi, who is an award-winning author in Japan and has several works to her name – although I believe this is the first to be translated into English. The Dark Maidens is certainly well written, and I think Akiyoshi has done well to capture an all-girls school and the thoughts and feelings students like these tend to have (albeit dramatically overblown to appeal to light novel readers, of course). Being one of the only murder mystery light novels available right now also gives it an advantage as there are little to none other Rashomon-style stories to compare it to. It’s clear that Akiyoshi’s a talented writer when considering that the story remains gripping despite knowing the truth, and I think that would usually be difficult to pull off.

The Dark Maidens has been released in English thanks to Vertical Comics and has been translated by Kristi Fernandez, who has done a great job. I especially liked the placement of translation notes at the bottom of a page to clarify some of the Japanese terms scattered throughout the book. This light novel also included illustrations by BOOOTA which depict happier scenes in the story. I feel this was a missed opportunity because there were some sequences they could have illustrated which would strike fear into the heart of the readers (especially given the cover art gives off a creepy vibe). The illustrations were certainly not bad though, they’re just weren’t what I’d have expected from a book like this.

Overall I remain conflicted about how to recommend The Dark Maidens. I think that hardened mystery fans like myself might see through its tricks too quickly but there’s something to be said for the fact that the story does draw you in. If you don’t cotton on to its endgame then there’s definitely a compelling story of betrayal and mystery here for fans of the genre. The Dark Maiden’s also notable for being one of few mystery light novels on the market in English, so perhaps it’s worth a look purely because of that. 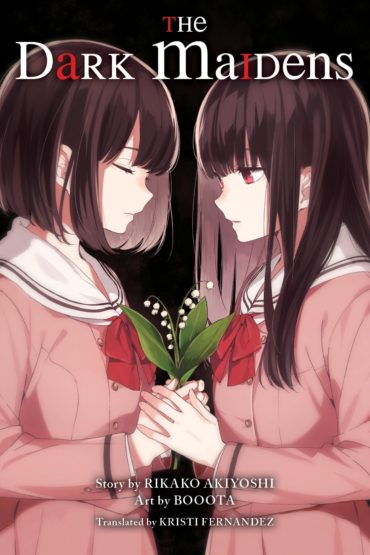