“Everybody needs his memories. They keep the wolf of insignificance from the door.” – Saul Bellow.

Before going any further, I would like to start this review with a warning. If, like me, you are not a fan of dubs, you should know that when you start playing this disc, the first thing that comes on when the main menu is loaded is a clip of Kirito and Asuna speaking in the English dub. If you want to avoid it, mute your TV first.

However, this is just a minor point. Going on to the film itself, this outing of SAO has many of the same pleasing elements as the original series. It also has some of the same negative qualities that have led some people to hate it. 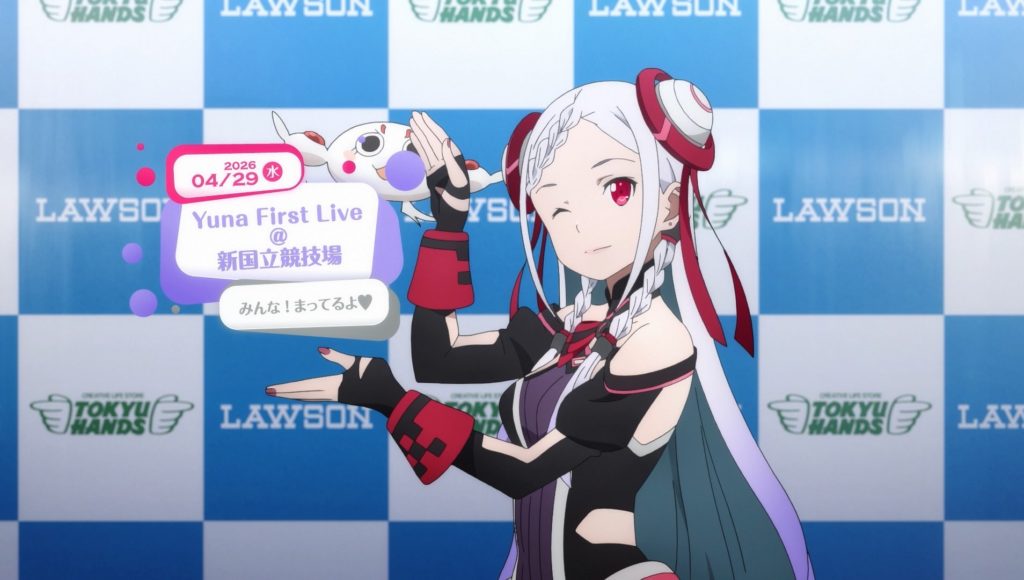 The film begins with a new form of gaming hardware being released to the public: the Aguma. It differs from the AmpSphere in that you don’t have to be unconscious to use it. You can wear it out in public with a simulated reality being created around you. It has become increasingly more popular than the “Full Dive” system that resulted in people being trapped in Sword Art Online, and thus games like that have gone into decline, with the most popular one now being Aguma’s Ordinal Scale, where players are ranked on how they achieve in certain tasks like fighting virtual monsters in the open world, gaining bonuses for doing so, while the game is promoted by a virtual idol named Yuna. To put it simply, imagine if Pokemon Go was played by people wearing the Google Glass.

One surprising person who is not into the game is Kirito, who still prefers the Full Dive and is not used to playing in a setting that has its real-world physical limitations. However, everyone else he knows is massively into it, and thus he gets dragged along into playing. While doing so, they battle a monster that they realize originated in Sword Art Online. Despite knowing how to defeat it, Kirito is powerless. Most of the work is done by another mysterious player, Eiji, who is the ranked No. 2 on Ordinal Scale, but it is Asuna who delivers the finishing blow.

Things soon begin to take a turn for the worse. Eiji seems to be hunting down old Sword Art Online players including Klein. Meanwhile, Kirito bumps into a virtual woman in a hood and tries to figure out their identity. Eventually Eiji targets Asuna and attacks her in battle. As a result of this, Asuna begins to suffer from memory loss – all of her experiences from Sword Art Online have vanished. It is the same with Klein, and the others whom Eiji has attacked. Kirito thus has to figure out a way to get back the memories, defeat Eiji, identify the hooded girl, and work out how everything is connected. 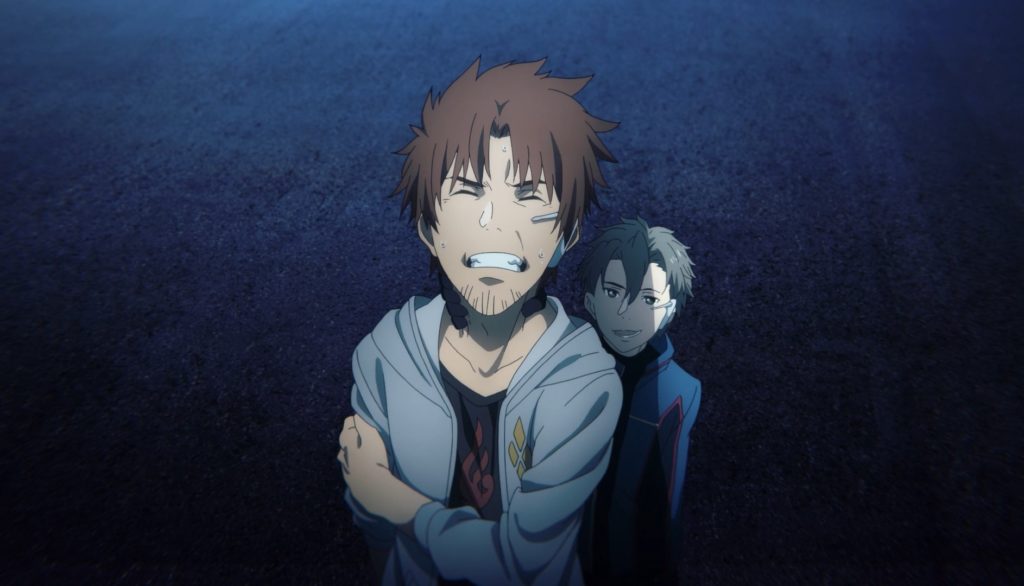 In terms of improvements over previous SAO outings, it would mainly be in the development of the characters. Past versions of the series have depicted the characters as being very black-and-white in terms of good and evil. The baddies tended to have no positive features whatsoever. At first Eiji seems like this too, but as the story progresses we learn of his past relationship with Sword Art Online and get a better idea of his motivation. When things turn bad for him near the end of the film, you do feel a bit of sympathy as you know he is not the true villain of the piece.

However, one of the issues that this film has is the story itself, and the idea of losing your memory because you are defeated in a game. This is not that original a concept, as it is one of the main themes in Log Horizon, which is seen by many as a better piece of story-telling. Then there is the idea of wearing these headsets in public all the time. I made the comparison to Google Glass earlier, and when that came out, the public hated them so much that seemingly the only thing to have really lasted is the term people invented to describe their users: “Glassholes”. Given this film is set less than ten years into the future, I don’t think much would have changed in that time. Also, at two hours long, Ordinal Scale does feel like it drags in certain places. Put it this way: I’ve reviewed two films this week, the other being Fairy Tail: Dragon Cry, which is about 90 minutes long and has much more action and excitement packed into it. 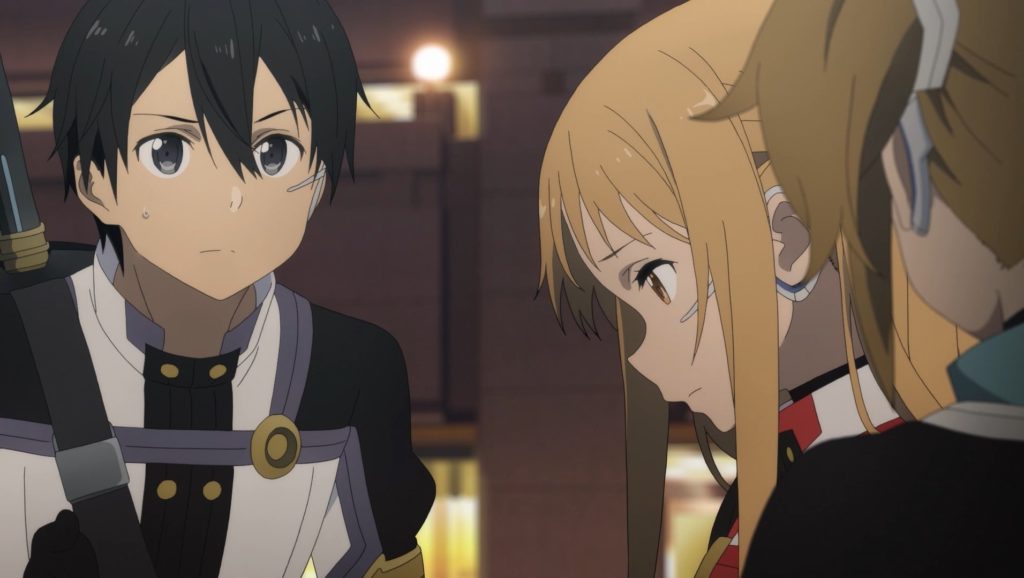 But SAO does make up for it in other ways, namely in the ongoing romantic relationship between Kirito and Asuna, which helps to drive the story, especially when Kirito needs to assist his love to recover her lost memories. If you like the series, Ordinal Scale is a good film, but not a great film. It feels as if a bit of editing down would have helped.

Concerning extras, there are English and Japanese trailers, a commentary by the director Tomohiko Ito and the original voices of Kirito and Asuna, Yoshitsugu Matsuoka and Haruka Tomatsu, and bonus Sword Art OFFline short. The collector’s edition also comes with art cards and a 60-page book covering the film and other elements of the series. 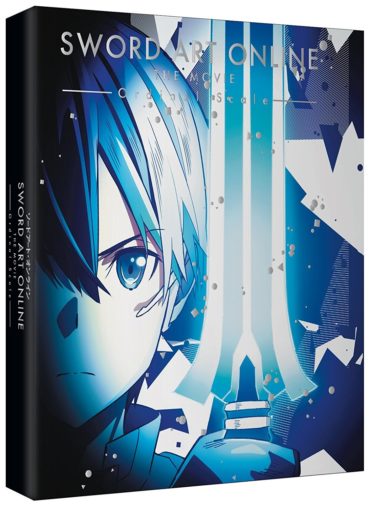