Since the release of Koyomimonogatari in August last year, the Monogatari series has been taking a bit of a break before jumping into the next volume. Now that break is over, Vertical has released Owarimonogatari: End Tale Part 1 which I’m here to review today. Let’s find out what’s in store for our heroes this time around…

The story begins by going back in time to when Araragi first met the mysterious Ougi Oshino, who has been appearing in the series since Kabukimonogatari. Kanbaru comes to Araragi requesting he help out a junior of hers who is troubled by discovering a space in the school that wasn’t there before. Wondering if it’s the work of an aberration, he and Ougi set out to investigate before anyone gets hurt.

What the two find is that a classroom has suddenly appeared where it shouldn’t be. When they enter, they suddenly become locked inside and are unable to escape. Araragi starts piecing together the clues littered around the room and realises this is a replica of his old classroom in his first year. This reminds him of a mystery the class faced which was never solved. Perhaps now Araragi can get to the bottom of the situation his younger self couldn’t.

Two years ago, Araragi’s class were all held back one evening when the class rep, Oikura Sodachi, revealed that someone seemed to have cheated during the last math exam. Sodachi wished to out the cheater and so dragged Araragi (who couldn’t possibly have been the culprit) into mediating at the meeting, but Araragi was frustrated when the class deemed Sodachi to be the cheater and left the real criminal to get away with their crimes.

In the present day, Araragi hopes to solve the case and make amends for his past failure, but even with the case behind him, he doubts it will make any difference to Sodachi (who stopped coming to school after the incident). Perhaps more worrying is that if they don’t solve the case, there will be no escape for Araragi and Ougi!

Part 1 of Koyomimonogatari contains three stories. Beyond the math exam case, there is a chapter based around Sodachi’s past friendship with Araragi (who has forgotten that they were once friends) and a story (loosely involving Sodachi) about Hanekawa and Ougi. Hanekawa is worried that Araragi is too trusting of Ougi and doesn’t believe she’s simply Oshino’s niece, as she claims to be. Why did she suddenly appear after Oshino’s disappearance? Why is she always involved in the weird going-ons lately? Hanekawa vows to keep the two apart while she searches for the answers to her concerns.

Since I started reviewing Monogatari back in 2017 I’ve been reading a lot of NISIOISIN’s other books. One of the things I’ve come to appreciate about the author is how well he can write mystery stories and that talent shines through in not only the first story in Owarimonogatari Part 1 but all three.

Ougi is a bit of a Sherlock Holmes in that she is incredibly intelligent and loves a good mystery. In all of these tales, she has the answers to the puzzle long before Araragi, but she lets him draw his conclusion while leading him (and the reader) in the right direction. By the time our protagonist has finally worked out the answer, we have too and it feels satisfying. It’s the kind of satisfaction I have gotten from reading all of NISIOISIN’s mystery novels.

If nothing else, it’s nice to see the Monogatari series back in full force after the short story Koyomimonogatari volumes. After reading Owarimonogatari, I’m excited to find out more about Ougi and how they fit into the overarching plot, but most of all it’s just nice to return to what the series does best.

Owarimonogatari Part 1 comes to the West thanks to publisher Vertical and has been translated by Ko Ransom, who swaps in from Daniel Joseph who handled Koyomimonogatari. As always, Ransom delivers an excellent translation with no issues to speak of. Part 2 is currently due for release at the end of February, so we won’t have long to wait for more! 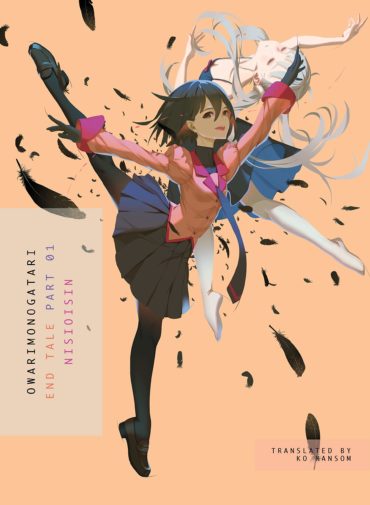