When reviewing the original volume, my reaction was mixed: there were good action sequences, but the comedy was rather lowbrow. This pattern continues into the second volume, although there are some other issues too.

Last time, we were following Denji, a man who has let a devil take over his body, meaning that he can sprout chainsaws out of his head and arms when he pulls a ripcord coming out of his chest. He is carrying out his new job as a Devil Hunter, working alongside the fiend Power, a corpse taken over by a devil, who also has the power to make weapons out of her own blood. The two are currently looking for Power’s pet cat Meowy, and in exchange, Power will let Denji do something he has always wanted to do – touch a woman’s breasts.

However, it was all a set-up to try and get Denji get eaten by a Bat Devil, but this devil also eats Power and Meowy too. Denji uses his chainsaw powers to break free and eventually defeat this monster, only to be attacked by another devil soon afterwards. Luckily, his superior Aki comes to rescue the lot. Later, the overall boss Makima orders Aki to take Power and Meowy into his flat. It’s here where Denji gets to fulfil the promise he was given, but when he does the dirty deed, he doesn’t get much satisfaction from it.

Later on though, when he is alone with Makima, he tells her what he did. Makima then lets Denji grab her breast and pushes things even further. Makima promises Denji that she will grant him one wish, no holds barred, if he can achieve one particular task. Denji agrees to it, and even the destructive nature of the task is not too great to put him off. Makima orders Denji to kill the Gun Devil, a devil so strong that 13 years ago it managed to kill 1.2 million people across the world in five minutes. The first thing Denji has to do is hunt a devil related to it that is on the eighth floor of a hotel, but soon he and the team he is in find themselves trapped on the floor with no means of escape.

Much like the first volume, the action scenes are the main appeal of Chainsaw Man. We see a fair amount of fighting as Denji battles against the Bat Devil, and we learn a bit more about the powers of the other Devil Hunters too. For example, Aki is in a contract with the Fox Devil, who lets Aki uses his powers in exchange for eating parts of his flesh. The Gun Devil is also building up nicely into a major antagonist for the series. A personal favourite scene of mind involves Makima talking about parts of the Gun Devil’s bullet-like flesh that they have collected. This then cuts to a scene where Aki and the one-eyed Devil Hunter Himeno are picking out flesh from a giant fish on robotic legs, which could well be a homage to Junji Ito’s Gyo.

Having said this, there are certain aspects of the story that don’t seem to add up without explanation. There is a flashback detailing how many people the Gun Devil has killed, listing how many people from different countries died. The figures include over 155,000 deaths occurred in the Soviet Union, a country that has never existed in the 21st century. Now, given that we are talking about a world with devilish monsters in it, it is possible that we are dealing with an alternative timeline, but I haven’t spotted anything that would demonstrate such a thing.

As mentioned, the comedy is rather base. Most of it is all about Denji wanting to touch women’s breasts. The only comic moment that got my attention is when Denji is allowed to touch Power’s breasts three times, and the first time he does, he discovers that Power is in fact wearing pads to make her breasts look larger.

I’m less keen on Amanda Haley’s translation in this volume it has to be said. The line that irked me was one in which Denji says he is going to, “murderize the Gun Devil.” That “murderize” just doesn’t seem to sit well in the story. It doesn’t sound like something anyone outside of America would say.

For these reasons, I’m less keen on this second volume. Hopefully the developing plot with the Gun Devil will improve things in future releases. 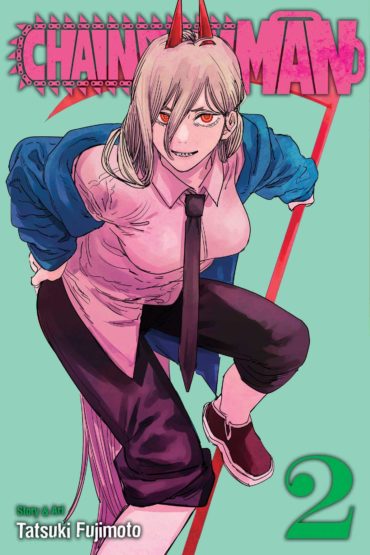