Isekai. It’s a word you’ve probably heard if you’ve been keeping up with the latest anime for the past 2-3 years, and/or are a visual novel consumer. It describes a sub-genre where a seemingly ordinary person is suddenly transported to and becomes trapped in another world. What started as a niche subgenre, has now become on of the most popular to adapt into anime, and the visual novel scene has so many stories in this subgenre that not one but two publishing companies have banned isekai stories from being considered for publication. The point of over-saturation has long since passed but that hasn’t stopped new isekai media being produced, with several being well received. We’ve had many ideas and gimmicks thrown in to keep the genre going, from a smartphone wielding protagonist (literally called In Another World With My Smartphone) to pregnancy (yes really, a series called Conception came out last year). With that said, the worlds that the protagonists get lost in are usually unique to the series even if they are, more often than not, based on Western RPG tropes. So, what if you took the isekai trope and applied it to one of the best-selling video game franchises of all time?

Shogo Sasaki is a Square Enix employee; he’s been a Final Fantasy fan for as long as he can remember, and has always dreamed of being hired by Square Enix to make his very own game. Sadly, he’s already been at the company for four years and no such opportunity has yet come along; even his own younger sister Yuko who’s been at the company for two years in their marketing team has had more luck than him. One fateful day however, the pair suddenly wake up in a world very different from their own, and Shogo recognises the races and creatures from it…moogles, chocobos, black and white mages…he’s in a Final Fantasy world! However, he quickly discovers that PLAYING a Final Fantasy and LIVING in a Final Fantasy are two very different things.

From the offset, the premise sounds like a cash-grab ploy with marketing executives at the helm coming up with the story (‘Isekai is popular, and so is our franchise, let’s capitalise on it!’) but if you think about it, the crossover of ideas make a lot of sense. First of all, if you’re not overly familiar with Final Fantasy, it’s important to know that the series has been going for 30 years with nearly 100 games under its belt, but the worlds they inhabit are not all the same. Just looking at the main series of games, you’ll find that each game takes place in many different worlds, from old-school fantasy types (Final Fantasy I to V and IX) to futuristic sci-fi (Final Fantasy XIII) to more modern landscapes with a fantastical twist (Final Fantasy VIII and XV for example) so any imaginative creator is able to either take any of these worlds for their hero to inhabit, or create a whole new one without their creation being considered out of the realms of the franchise’s possibilities. Secondly, a lot of the games often have an ‘audience surrogate’ in the shape of the protagonist who is a fish out of water and needs to learn the rules of the new world, similar to the role of a hero in an isekai story. (For example, Tidus in Final Fantasy X being whisked into the world of Spira, or Vaan in Final Fantasy XII getting caught up in a political plot when before he was just an orphan boy with little world experience.) In Final Fantasy: Lost Stranger, the premise is, at first, played more straightforwardly  with the lead being a Final Fantasy nerd who gets thrown into a world he happens already to be a fan of. But the main story isn’t a grand ‘save the world’ type of affair like the games, and Shogo’s knowledge of the game doesn’t make him badass in the world he inhabits. Instead he joins a small group of adventurers, who simply want to get by on hunts and the money they earn to survive, with both Shogo and Yuko seemingly just along for the ride because they have no choice, and are learning what they can as they travel. The first half the book is a very easy breezy read with little trouble or consequences, that is until the first big twist. Obviously, I won’t spoil it here, but it does give this particular series a kick that the audience does not expect, and shows that the series is not just interested in being a self-insert Final Fantasy fan fiction affair. It is its own story and where it goes from here could be very rewarding if the writing continues to hold up.

If you’re a fan of isekai, but are not familiar with the Final Fantasy franchise, will this series do anything for you? I’m personally pressed to find a reason why you’d be interested in this story if you weren’t already a fan, but if you were a non-FF nerd and did decide to pick it up, you might find yourself a bit lost. The good news is that the main world itself is not based exactly on any one pre-existing game, so there’s no specific title that you’ll need to play in order to understand this story. However, there are, of course, a lot of references to the main games themselves. When Shogo first enters the world, he gives names to roles and races according to the vocabulary used in Final Fantasy XIV. There’s a lot of visual references to other titles such as X and VI with recurring elements in the series present from spell names (Cure) to creatures and enemies (cactuars included). Most importantly, the developments in the second half of the story (taking place after the twist) rely heavily on taking common Final Fantasy elements and tropes, then twisting them around to something different. For example, the skill known as Libra is often an easily learnt and necessary skill in the games; in this manga story however not only is it not common but it’s only heard of in their world’s fairy-tales. This is an interesting twist but also a welcome change; recurrent series elements such as spells have been reinvented and repurposed over the franchise’s long life, so seeing something so mundane in the series being used in a new and unique way is very welcome, but of course would go completely over the heads of any non-Final Fantasy fan.

Outside of the broad strokes of being an isekai story with a Final Fantasy twist however, is it actually any good? Yes, there’s a lot to enjoy here; the leads are likeable, and not just because they happen to have my dream job of working in a gaming company, but they also try their very hardest to live their new lives inside this FF world and keep each other spirits up. The other members of their party are also entertaining with nice comedy timing, if mostly underwhelming in personality. The art is also very good; there’s tons of beautiful details, from the character designs that reflect their roles very well to the stunning backgrounds that could have easily been ripped out of a Final Fantasy title. There are also faithful re-creations of the series’ staple monsters and creatures. However, when the manga is leaning early on into its comedy side, the panels do look incredibly cluttered; the vivid backgrounds and the excessive use of sound effects, all whilst trying to maintain the action in the progress can lead to some very confusing panels. The translation by Melody Pan is well done, with nice translation notes at the back and lots of notes mid-book that help the reader keep up with the multitude of references to other Final Fantasy titles. There’s only one choice that I find curious: from the very start of the book the main characters abbreviate ‘Final Fantasy’ and ‘Square Enix’ to FF and SE respectively. This would be understandable if this wasn’t an officially licensed Square Enix product or if the characters had been saying the long form of those words over and over again at this point, but neither apply. It’s especially confusing early on in a flashback where Shogo cheers his sister up, and it’s made clear he’s saying ‘FF’ and NOT the full series name ‘cos the baby sister replies ‘Eff Eff’ so the ellipsis isn’t exclusive to the text, which is a weird choice indeed.

Final Fantasy: Lost Stranger could have been a recipe for generic isekai fodder but thankfully it’s been written and drawn by long-term Final Fantasy fans – Hazuki Minase (Story), Itsuki Kameya (Art) – and their love for the franchise shines through. The story, with its twist on standard Final Fantasy elements, is interesting, the art is lovely and there are plenty of references for old and new fans of the franchise to pick up on. A worthwhile manga series to look out for if the premise ticks the right boxes for you. 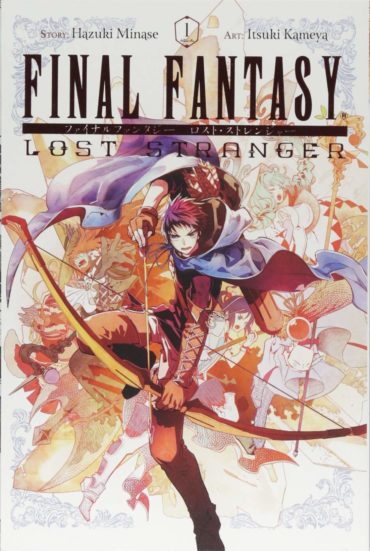 The Dark History of the Reincarnated Villainess Volume 1 Review

The Dark History of the Reincarnated Villainess sees protagonist Konoha reincarnated into the world of an otome novel she wrote as a middle-schooler, but instead of becoming the hero, she’s the villainess! Now she must avoid triggering any death flags resulting in her untimely demise.