While I finished the first volume of Love in Focus with some mild concerns about the series’ short future (being complete at three volumes in Japan), I liked what I saw. Today I return to check out Volume 2 and see what the cast are up to this time.

When we last saw our protagonist Mako Mochizuki, she was busy breaking through to the quiet and aloof Amemura. The two are now firm friends, but childhood friend Kei is jealous of Mako’s blooming friendship with another boy. Sensing that the two may fall for one another, Kei warns Amemura that he can’t have Mako – admitting in the process that he is in love with her.

Mako is of course completely oblivious to this newfound rivalry between Kei and Amemura, instead wondering why she can’t seem to bring herself to take pictures of anything but Amemura. As the photographic club prepares to embark on a club trip, it seems like the perfect opportunity for Mako to work out what’s holding her back – but for the boys it’s a chance to come to grips with their feelings.

While the first volume of Love in Focus focused on Amemura and his background, this time around we get to explore Kei’s past. Over the course of a short flashback, we discover that Kei’s passion for photography and friendship with Mako developed out of a desire to escape his stifling home life. Having left home for high school and lived on his own, Kei’s feelings for Mako only deepened as he began to see her as his saviour. Now having admitted his feelings to Amemura, Kei knows he must confess to Mako or risk losing her altogether, but how will that change the friendship the two currently share?

Amemura for his part also spends most of this volume oblivious to the feelings of those around him. Having had Kei warn him off Mako, Amemura only wonders about how Mako hasn’t noticed the fact Kei likes her. Although he’s grown attached to Mako in his own way, Amemura’s feelings aren’t quite love – at least not yet.

While it’s hard to say that Love in Focus has broken out of any of the genre tropes it started with, I still find myself fond of the three main characters and the series overall. Despite there only being a single volume left, I’ve come around to the idea that one remaining volume is more than enough. We’ve explored the backgrounds of each character well enough that all we have left is to pair someone up with Mako (or perhaps no one at all?).

One of the things I really like about this series is Yoko Nogiri’s use of panels. She uses a lot of full page spreads to capture the characters at their most intimate. Although the backgrounds aren’t usually very detailed, this puts more emphasis on the characters who are in the shot. Nogiri is also good at conveying emotion through the eyes of her characters, something I’m always fond of in manga. The manga certainly gives off a shojo vibe; it almost sparkles as you flip through the pages. It’s fun to read and Nogiri has done a good job with it.

This volume of Love in Focus once more comes to the West thanks to Kodansha Comics and has been translated by Alethea and Athena Nibley. The translation continues to read well and be problem free. Kodansha has the final volume in the series scheduled for release in July, so we won’t be waiting long for the conclusion!

Overall, Love in Focus hasn’t managed to break free of the tropes it started out with but it succeeds at being a fun read. Shojo fans will certainly enjoy their time spent with the likeable cast of characters, especially knowing that it’s a shorter series in the genre. 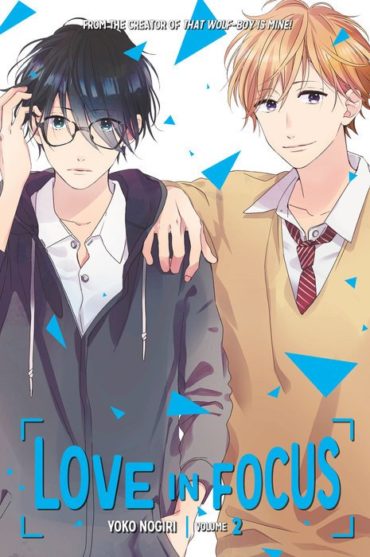 Love in Focus isn’t groundbreaking nor is it particularly compelling to read, but the characters are charming and intriguing enough to keep you turning the pages to see what’s next.

Now that we’ve reached the end of Love in Focus, I can look back and say I enjoyed the series quite a lot. The characters were likeable and the romance was intriguing. Anyone looking for a shorter shojo series should definitely give this one a read.