The final volume of Love in Focus is here! After the dramatic events of Volume 2, just who will our heroine end up dating (if anyone)? Everything is at stake, and friendships are muddled, as our protagonist comes to grips with her feelings…

At the end of Volume 2 Mako was confessed to by childhood friend Kei, whom we’ve long known has had a crush on her. His confession is such a shock to Mako that she comes down with a fever! After recovering, she spends a week mulling over Kei’s words, debating if she sees him as a romantic interest or not.

In the end Kei suggests that he and Mako begin dating on a trial basis, to see how things go. Mako agrees to this but it’s clear to Kei that her feelings aren’t necessarily in his favour. Elsewhere, Amemura is upset by news of Mako and Kei becoming a couple, but he tells Kei he has no intention of stealing her from him. It’s an honest and noble comment from the more likeable love interest of the two.

When not knee-deep in the romance, this volume of Love in Focus also aims to complete the back stories of Kei and Amemura. Although we were already vaguely aware of Kei and Amemura’s troubles, the series brings them back to the forefront of the story (briefly). In both cases their issues are dealt with swiftly, but mostly ‘off-screen’ in the case of Kei, and I was satisfied with the outcomes.

I’ve said this before but I feel it’s worth saying again. Love in Focus doesn’t do anything to break the tropes of the shojo genre but it has been a fun read regardless. Mako and Amemura are likeable characters with great chemistry, and although I find Kei a bit too pushy and overconfident, he too has proved interesting. I especially like that Mako isn’t easily strung along by the romance and is still very aware of those around her and her own thoughts. She’s very introspective and I think that’s a great quality for a shojo protagonist to have.

The only real issue I had with this final volume is a cliché that mangaka Yoko Nogiri introduced to make a potential romance feel ‘fated’, because Mako’s grandfather told this particular boy about her many years ago. It was certainly sweet but the series would have been perfectly fine without it and it feels a bit forced. Some of that is because the series is only three volumes, and were it longer, it probably would have slotted in more naturally.

The final volume of Love in Focus comes to the West thanks to Kodansha Comics and has been translated by Alethea and Athena Nibley. The translation once again reads well and is problem-free.

Now that we’ve reached the end of Love in Focus, I can look back and say I enjoyed the series quite a lot. The characters were likeable and the romance was intriguing. Anyone looking for a shorter shojo series should definitely give this one a read. Meanwhile, I’ll be looking forward to seeing more from Yoko Nogiri in the future! 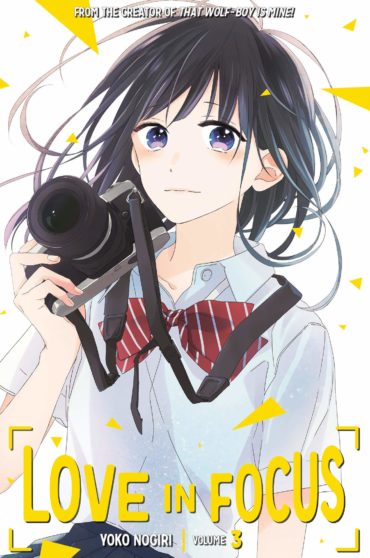 Love in Focus isn’t groundbreaking nor is it particularly compelling to read, but the characters are charming and intriguing enough to keep you turning the pages to see what’s next.

Love in Focus hasn’t managed to break free of the tropes it started out with but it succeeds at being a fun read. Shojo fans will certainly enjoy their time spent with the likeable cast of characters, especially knowing that it’s a shorter series in the genre.