Tasuku Kaname feels that his life is over. Accused of being gay by a callous classmate at his new high school, he’s standing on the edge of a steep drop in his new home town of Onomichi when he sees – or thinks he sees – a young woman jump out of a window into the void. Rushing down the hill to make sure she’s all right, he finds himself at a house named ‘Drop-in Centre’ with a sign outside bearing the message ‘Please come in – Manager.’ The young woman – known only as Someone-san – has established this centre for people just like Tasuku: a place to go to where they can feel safe, discuss their problems, listen to music and drink coffee. “Tell me anything,” she says to Tasuku, with an enigmatic smile, “I won’t listen, though.”

Another member of the Drop-In Centre, affectionately known as Tchaiko-san, not only shares his love of Tchaikovsky’s music (and coffee) with the others but even looks like the nineteenth century Russian composer (who, we now know, was homosexual and suffered greatly from having to conceal his true orientation).

Tasuku, conflicted and desperate, begins – in spite of himself – to become involved in the group activity that the adults in the centre are involved in. Onomichi has many old abandoned old houses (families have long since moved away) which they’re renovating. It’s hard, physical labour, backed by a non-profit-making project, ‘Cat Clutter’, aimed to bring life back to the neglected parts of the town. Tasuku meets the young lesbian couple behind the project, and starts to lends a hand. Haruko and Saki share a dream: to get married with all their friends present, in spite of the problems they anticipate in telling their respective families that they intend to spend the rest of their lives together. This revelation makes a profound impact on Tasuku in which he realizes that he, too, is in love with someone – another boy at his school.

Sometimes it can be really difficult to do justice to the power of the story-telling art of a mangaka in words. Our Dreams at Dusk: Shimanami Tasogare is one of those unique titles that’s hard to define. On the surface, it’s a slice-of-life story about growing up and discovering one’s sexual orientation in a town that, while not a backwater, has maybe seen better days. But Yuhki Yamatani has brought  together many disparate elements to create a manga that resonates on so many different levels. Yamatani portrays the pain felt by the LGBT+ cast as they encounter everything from bullying at school, lack of understanding in their own families to the well-meaning but equally hurtful attempts of friends to ‘understand’.

The French title Eclat(s) d’Ame (‘Soul Shard(s)’) is very effective also – as the imagery Kamatani employs when Tasuku experiences a life-changing moment of self revelation is expressed in a physical  explosion of shards of meaningful images, bursting from deep within his body. These  moments of magic realism – so beautifully and strikingly portrayed – give Our Dreams at Dusk added resonance.

Yuhki Kamatani is best known for the contemporary ninja manga Nabari no Ou which reached a wider public when made into a TV anime series in 2008. Notable at the time for featuring Yoite, a gender-fluid character, with great insight and sympathy, Kamatani (who identifies as X-gender and asexual) has gone on to deal openly with LGBT+ characters in a sympathetic and insightful way here, using their considerable skills as a mangaka to bring this story to vivid life.

In this attractive edition from Seven Seas, we get two colour plates and the talents of Jocelyne Allen as translator, with Ysabet MacFarlane responsible for the adaptation and Kaitlin Wiley for the lettering.

Our Dreams at Dusk is only four volumes in length (and Seven Seas will bring all four out in 2019) but the mangaka’s considerable skills as a graphic storyteller are evident from the first page as we are plunged into the living hell of Tasuku’s school life. Yet it’s not a depressing read. There are some truly heart-wrenching moments – but also some breathtaking images. The town of Onomichi is almost a character in its own right, depicted in loving detail. Above all, the story offers a compelling vision of hope for a future where we can be accepting of one another and welcome and celebrate difference. Tasuku has embarked on a journey of self-discovery and self-acceptance, thanks to the mysterious and elusive Someone-san – I can’t wait to see where it will lead him. 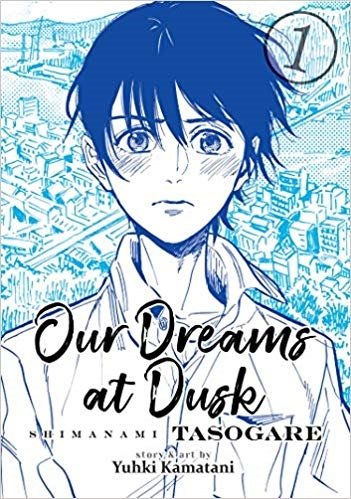