With the release of Tsukimonogatari, the Monogatari franchise has entered into its ‘final’ season. Putting Araragi back in the seat of the narrator the series begins to set itself up for the end game, but is the final season off to a good start? Let’s find out!

As we reunite with Araragi after the life-or-death story of Koimonogatari, things are peaceful. So peaceful in fact that the first 60~ pages of this book are spent with Araragi playing around with his sisters, Karen and Tsukihi. However, Araragi never goes for long without being wrapped up in some kind of mystery and this time is no different. While taking a bath with Tsukihi, Araragi looks into the bathroom mirror and finds that he suddenly has no reflection! The loss of his reflection is usually the symptom of being a vampire, but nothing else seems to have changed for him or Shinobu. Confused, Araragi contacts the only person he can confide in and seek answers from – Yozuru Kagenui.

A meeting with Yozuru is quickly arranged and once there, Araragi is told a bitter truth – he’s relied on his powers too much. Having often become a vampire to solve the problems of those around him, Araragi is now losing his humanity and becoming a true vampire. Right now our hero is on the cusp of being unable to remain human. Yozuru warns him that should he use his powers even once more (or give Shinobu his blood), he will irreversibly become a vampire. For someone so involved with aberrations as Araragi, the thought of having to solve issues through strictly human means is frightening, but this is something he must come to terms with: a shackle which changes the playing field for Monogatari as a whole.

After the second season focused more on the extended cast of Monogatari than Araragi, it was about time we rolled back around to the main character. Since the disappearance of Oshino, Araragi has been relying heavily on his vampire powers and ultimately he’s been able to solve most things with them. I hadn’t considered it before this book, but perhaps Araragi was almost at the point of becoming unstoppable. The fact I hadn’t considered it before now and that author NISIOISIN has already stepped in to limit it is a good sign though. It shows how aware the author is of everything that happens in his series and how easily the balance can be destroyed if you go too far. It’s the sort of awareness that comes with great experience, which of course NISIOISIN has plenty of!

Ultimately Tsukimonogatari is a book that is setting up for much bigger things. How will Araragi’s loss of power impact on those around him? Will he still find himself drawn to aberrations as he fights to hold on to his humanity? In some ways, this book feels like it’s severing the ties between Araragi and the mystical world he’s been a part of. With college looming, some could say it feels like our protagonist is simply growing up. Whatever the case, Monogatari is unlikely to ever be the same, but that’s okay. This is the final season and the stories of the older characters do need to come to an end someday.

This volume of Monogatari is brought to the West once more thanks to publisher Vertical. It has been translated by Daniel Joseph and the translation reads well. Although Joseph hasn’t worked on any books with Araragi in the starring role until now, the dialogue has the same great snappy feeling to it that we’re used to.

Overall the final season of Monogatari is off to an intriguing start. Tsukimonogatari may be but a stepping stone on the road to a much bigger story, but it’s changing the franchise in fundamental ways. NISIOISIN continues to keep his beloved series alive with new and compelling developments. 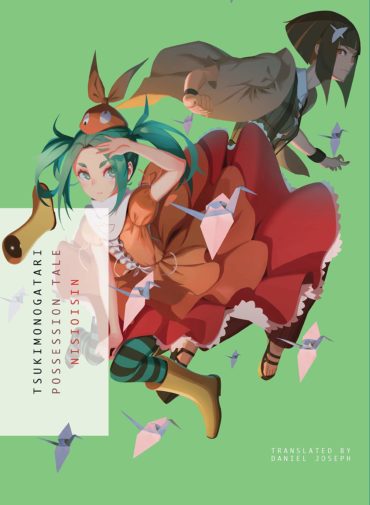