The Autumn anime season is in full swing and one anime getting a lot of excitement in Japan is Beastars. Although we can’t watch the series for a while yet due to Netflix licensing it, we can read the award-winning manga the show is based on. Today I’m here to take a look at Volume 1 and find out more about this critically acclaimed story.

The story follows grey wolf Legosi, a second-year student at Cherryton Academy. In this school carnivores and herbivores live side by side, hoping to obtain the rank of “Beastar”, which shows one is of great talent and trusted to lead society forward. Legosi spends his days peacefully with friend and dorm-mate Jack (a labrador) and attending the school’s drama club. However, when one of the herbivore students and fellow club-mate (Tem) is brutally murdered – Legosi is suspected of the crime and has to prove his innocence.

Although this is a world where the ‘hunters’ and the ‘prey’ live side by side, there is still an obvious divide between the classmates. Legosi, being a wolf, is seen as one of the most fierce of the carnivores despite his incredibly gentle nature. After the death of Tem, the herbivore members of the drama club keep their distance from Legosi, leading him to wonder if he should quit entirely.

It’s shortly after all this that Legosi meets Haru, a dwarf rabbit. Their encounter is difficult for Legosi who allows his instincts as a wolf to take over and almost causes her harm, but for Haru perhaps he is just the person she’s been looking for…

While this volume of Beastars has a lot of setting up to do, it’s clear that the real meat of the story is not in this instalment. Haru and Legosi’s meeting is a pivotal point for the series but it doesn’t happen until halfway into the book, with not enough time in the remaining pages to find out what it means for our cast. This ultimately leaves me with conflicted feelings toward the series.

I grew quite fond of Legosi throughout this book, but I must admit I felt like Beastars was lacking a hook. Had Legosi met Haru earlier and grown upset about his instincts toward her then, I think I would have become very invested – but it happens too late. This is a series that requires you to read Volume 1 and 2 together to be able to decide if you like the manga or not, which is going to be off-putting to some.

Beastars has been created by mangaka Paru Itagaki and the artwork has a very distinct style. Backgrounds are quite often empty or simple pencil sketches but there is a good amount of detail in the character designs. The cast are all a somewhat odd mixture of animal and human proportions mixed together, but to Itagaki’s credit, it’s always easy to tell what animal the characters are supposed to be. Itagaki also does a good job of conveying the feelings of the cast well, with plenty of scenes showing both the cute and nasty side to their nature. I did find that Legosi and co. were often drawn off-model, but the whole manga gives off the feeling of being inconsistent from scene to scene so it’s not necessarily a glaring issue.

This release comes to the West thanks to publisher VIZ Media and has been translated by Tomoko Kimura. The translation reads well with no obvious issues. Beastars is on-going in Japan at 15 volumes and Viz has already released Volume 2, with 3 and 4 scheduled for release between November and January 2020.

Overall, the first volume of Beastars is not going to be enough for you to decide if you like the series or not. There are certainly some interesting concepts in play and it’s a unique story, but I’m not convinced that’s quite enough for every reader. Certainly, one to keep an eye on, if nothing else! 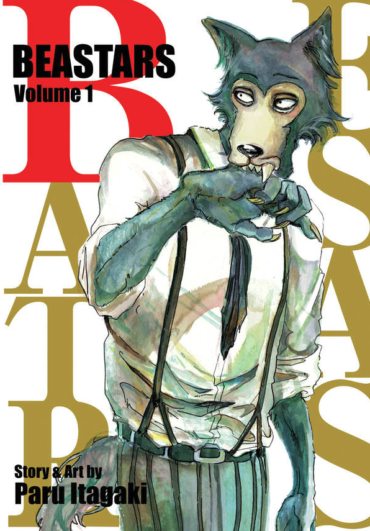