Some readers may already be familiar with this series, created by Taiyo Matsumoto (Tekkonkinkreet, Sunny), as we reviewed the more recent anime release for AUKN back in July 2016. Back then, the world was preparing for the Rio Olympics. Now the original manga has been brought out for 2020, as the world was meant to be slowly preparing for another Olympics, but of course, a certain something put a stop to the Tokyo games.

Ping Pong originally was released between 1996 and 1997, and the five volumes that made up the series are now being released in English by VIZ Media across just two large books, which include some colour pages. While there are no translation notes, certain pieces of info are jammed into the gaps between the panels.

The story follows two schoolboys who are members of the school’s table tennis team. These are Makoto Tsukimoto, ironically nicknamed “Smile”, who is brilliant at the sport but lacks any motivation to actually win, and his childhood friend Yutaka Hoshino, nicknamed “Peco”, who is more brash and seen as one of the best players in the squad.

However, as the story progresses, things begin to change. Peco has some big losses, which cause him to lose his willingness to play table tennis and thus he starts to avoid practicing. Smile meanwhile attracts the attention of the team’s coach, Jo Koizumi, who spots Smile’s worth and starts a programme to motivate him, and ultimately become a top player.

Those who have seen the anime when it was released will remember that one of the things that made Ping Pong stand out in comparison to other sports anime is the artwork. In comparison to the crispness of the animation and rather cute depictions of the athletes in most series, Ping Pong had a much rougher look. The same is true for the source material.

To put it simply, if you are the sort of person who wants their sporty guys to look like someone from Free! or Yuri!!! on Ice, you will want to look elsewhere. There is no cuteness round here. Taiyo Matsumoto’s artwork is deliberately rough and jagged. You see drawings of people with their eyes slightly different sizes for example. However, you also get the feel that the actual sporting action is high-paced and frantic, as the players bounce around the table to make their shots.

Having said this, it has to be noted that the sport itself has now changed. The manga finished in 1997. A few years later, the governing body of table tennis brought in new rules to make the sport more TV-friendly. Namely, making the ball larger to slow the game down, thus making it easier to watch, and reducing the number of points needed to win a set from 21 down to 11.

As a result of this, the manga has dated, but arguably you could say this is a good thing because it shows the sport at its lightning-fast original best, rather than the slowed-down version that people have to watch now.

As for the dialogue, it feels minimal at times, with the action of the sport being what drives the story forward. The story itself has a high-profile translator, Michael Arias, the director of the film version of Matsumoto’s Tekkonkinkreet, and who has translated other works by Matsumoto for VIZ in the past. Arias’ translation is indeed decent, and the lettering is also good – however, due to the fact I have been sent a digital copy of the manga to review which omits the pages that lists all the people behind the making of the manga, I don’t know the person responsible for the lettering. They did a nice job however, clearly distinguishing between the main dialogue, written text, and speech not in Japanese. Aside from colour pages, there is also a bonus story and afterword from Matsumoto as extras.

If you are into sports anime but are looking for something a bit different, then Ping Pong is a title to seek out. 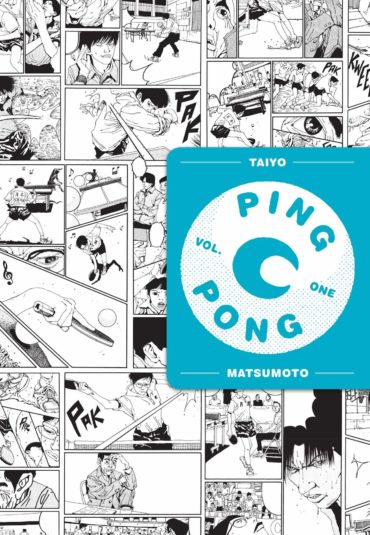