This Shonen Jump title by two relatively unknown creators, artist Shiro Usazaki and writer Tatsuya Matsuki, is a series that, while it has some issues, does also have an appeal. Since it began it has been nominated for awards and in 2022 it will be adapted into a play.

act-age follows 16-year-old schoolgirl Kei Yonagi. She aspires to be an actress, but has had to deal with a series of setbacks in her life. Her father abandoned the family and her mother is dead. Also, she has two younger siblings to look after. Despite these problems, she still believes she can overcome all this to become a great actress.

She auditions for an agency called “Stars”, and while the acclaimed director Sumiji Kuroyama is impressed, the CEO of the company, Arisa Hoshi, believes that acting will destroy Kei and turns her down. Kei does get a break at Stars when someone pulls out of the final audition for a job and Sumiji manages to Kei to replace her, but despite a brilliant performance where she demonstrates superb method acting, Stars still reject her.

Following this rejection, Kei receives a surprise visit from Sumiji himself. He has created his own film studio, Daikokuten, and he wants her to star in his film. Kei rejects the offer, with herself and her siblings considering him to be shady. The fact that Kei only takes up the job after Sumiji pulls her off the street and into his car is a sign that Kei may be right, but when he offers Kei the chance to do an advert, Kei immediately jumps at the change. Thus, Kei finally begins her acting career, with Sumiji mentoring her, with the help of his somewhat stressed producer Yuki Hiiragi.

As mentioned, act-age does have some issues. The scene in which Sumiji grabs Kei off the street and into his car is one. It does all feel non-consensual. It feels even more troublesome when you realise that Kei is 16 and Sumiji is 35. At one point Kei even asks Sumiji out straight if he has a Lolita complex, which he denies. That is not the only issue some people might have when reading this opening volume. In between chapters there are profiles of the main characters, and in Kei’s profile it lists her favourite films. The manga states that she likes romantic films, including Gone With the Wind, a film in the news recently due to the way it depicts racism and slavery.

However, where the series does come off more positively is with Kei herself. We see her as someone who is capable of so many things: not just acting, but the fact that she has to look after her entire family as there are no parents to support these three kids. Of course, her acting is where she stands out and this is the main focus of the story. In the first chapter, she shines in an audition where she and three other women are told to improvise a scene in which they encounter a feral dog. Kei seemingly comes out on top by acting a scene in which she fights the dog rather than acting scared. Despite her performance, the prejudiced views of Arisa prevent her from getting the job. Later on in this volume, we see her acting skills develop. At first, she can only act from her own personal experience, but slowly she begins to realise that she can inhabit the role of someone completely different. This leads to a telling moment where she says with a smile: “Until today, I never realised what a terrible person I could be. There are unknown versions of myself slumbering within me.”

In terms of the manga’s production, Camellia Nieh appears to do a fine job with the translation. I’m not entirely sure about some of the more jagged lettering used by Eve Grandt when Kei is talking, but other than that, nothing else comes across as possibly problematic.

The manga has already attracted praise, being nominated for a Kodansha Manga Award. It is also establishing other characters and rivalries. The end of the first volume sees Kei auditioning for a Battle Royale-style film in which the main talent from Stars, a woman named Chiyoko Momoshiro, is also starring. Thus we can expect growing tension, at least between Arisa and Sumiji and possibly between Kei and Chiyoko too. It will be interesting to see where it goes from here.

Read a free extract from the manga at the publisher’s site here. 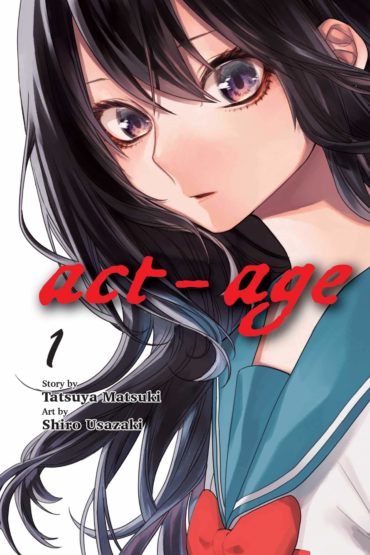