Author Natsume Akatsuki is best known for being the creator behind beloved comedy light novel series Konosuba, but today I’m here to talk about a different novel series of his – Combatants Will Be Dispatched!, which Yen Press has just started to bring to the West. Does it offer the same brilliant humour? Let’s find out!

Our story follows Combat Agent Six who works for the Kisaragi Secret Society. This society is, truthfully, an evil organisation with its sights set on world domination. This doesn’t just mean conquering Earth, but also any other planets out there! In their first move off-Earth, the organisation sends Six and android Alice to an unknown alien planet on a recon mission.

Upon arrival on this planet (which goes unnamed), Six and Alice meet the busty knight Snow, who brings them to her country’s princess. She quickly recruits the two into her city’s army to help fend off the Demon Lord’s Army! Six certainly has his work cut out for him if he wants to help conquer the planet as first, he’ll have to defeat the competition. Paired with the Android (Alice) who threatens to explode if forced to fight, a useless knight who hates his guts (Snow), a wheelchair-bound archbishop whose curses have a chance of backfiring on her (Grimm), and a chimera with a serious case of chunibyo (Rose), Six is going to have to fight twice as hard to accomplish his bosses’ goals.

Although the initial set-up for Combatants Will Be Dispatched! is quite serious, it swiftly throws all caution to the wind and leans into the comedy. The characters and their interactions would not be misplaced in Konosuba. They all have issues and it’s hard to see the good in any of them (which I suppose is the point in Six’s case as he is supposed to be evil), but that just makes the series all the more enjoyable.

Author Akatsuki wrote this story before Konosuba, but it only got licensed (both here and in Japan) because of the latter’s success. In a way, this is a shame because Combatants Will Be Dispatched! feels like a trial run for what eventually became Konosuba. Six is just like protagonist Kazuma, Snow is a mix of Aqua and Darkness and Rose is Megumin (complete with the chunibyo issues) and while I certainly don’t mind that, it might put some readers off.

Characters aside, the plot for Combatants Will Be Dispatched! is quite different to that of Konosuba. While both are ‘other world’ stories, Six and his group are at least more prepared to fight demon lords than Kazuma and his crew. There is a lot more action on offer here and the concept of Six being evil means Akatsuki can lean into that and have Six do unspeakable things to the townsfolk and demons alike. It’s a solid story with a unique kind of twist that you don’t see all that often.

The only minor issue for some readers may rest with the comedy, which can be quite sexual (as with Akatsuki’s other series). I found the whole volume hilarious from beginning to end, but I also don’t mind this kind of humour, as long as it’s in good spirits – which it is here.

Illustrations for the series have been handled by Kakao Lanthanum and they’re all well-drawn. Lanthanum does well to capture the feeling of a fantasy world and those who inhabit it. I am especially fond of all the ‘chibi’ renditions of the characters dotted around for chapter titles.

This series comes to the West thanks to Yen Press, who also publish Konosuba and its various spin-offs. The volume has been translated by Noboru Akimoto and the translation reads well with no problems. As always with a Yen Press release, there are various colour pages included at the beginning of the book depicting the cast. Combatants Will Be Dispatched! is on-going in Japan at four volumes and Yen Press currently has Volume 2 scheduled for release in December. The company is also publishing the manga adaption, if you prefer manga to light novels! 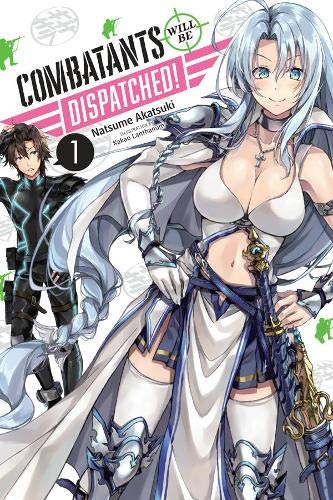 Title
Combatants Will Be Dispatched! Volume 1