In the time since Volume 4 of Combatants Will Be Dispatched! the anime adaptation has been and gone. Now the light novel series carries on and Volume 5 has reached the West. With that in mind, let’s find out what’s in store for our cast today!

Six and his team have defeated the Demon Lord’s Army and are busy building up the Kisaragi Corporation’s home base. Thanks to their success, the Demon Lord has invited Six (and Snow as a representative of the Kingdom of Grace) to take part in peace talks in a bid to hopefully bring an end to the war.

However, when the group arrive, they’re surprised to find out that the Demon Lord is already dead, having been defeated when Supreme Leader Lilith went on a rampage (in Volume 4). Now his daughter Viper is left in charge and she wants nothing more than to find a safe place for her subjects to live and bring an end to the fighting.

While peace talks are ongoing between Viper and Princess Tillis, Alice decides that the best thing Kisaragi can do is take in Viper and the demons and put them to work. This becomes especially important when the group’s home base comes under attack from the Sand King (a giant mole creature), a fearsome monster that Lilith angered. Their Supreme Leader left behind nothing but trouble for our heroes to overcome!

When you think of the isekai genre and the concept of a demon lord, it’s fair to say that the defeat of this enemy is usually the end goal of the series. But as author Natsume Akatsuki comments in his afterword, while that might be the end goal of a series like Konosuba, for Combatants it’s nothing but a small stepping stone toward their goal of invading the planet.

I’m a little disappointed that the Demon Lord was effectively killed off-screen in Volume 4, but the storyline for Volume 5 more than makes up for it. Six and his crew instantly become close friends with Viper, who is an easy-going and gentle demon. Yes, the demons might have done some bad things in the past, but Kisaragi is an evil corporation so it’s no surprise they’d readily accept them into their ranks.

Akatsuki also made the right choice in not having the demon storyline make up the entire book, instead opting to include the repeated fight against the Sand King as a secondary plotline. This offers us some action-packed scenes where Grimm and Rose can show off their fighting strength, which is important since they don’t get a lot of page time otherwise.

Where Volume 4 was focused on character development for Six and causing trouble with Lilith, most of Volume 5 is set within the Kisaragi base. This makes it easier for the extended cast to drop in and out as needed without having a major focus//being in the spotlight  and it also means there is a bit more downtime, which works in favour of the comedy. Given how this book ends, it’s clear this will all change in Volume 6, so it’s nice to have had a break while we can and just spend time with this quirky cast.

I also feel it’s worth mentioning that because this book is so focused on both Viper’s introduction and the battle with the Sand King, the usual sleazy humour is somewhat toned down. Of course, this is a book written by Akatsuki so there are still some jokes that will make you laugh and cringe in equal measure, but I think it’s an improvement on how Combatants usually is.

Volume 5 of Combatants Will Be Dispatched! comes to the West thanks to Yen Press and has been translated by Noboru Akimoto. The translation reads well with no issues to note. Volume 6 of the series has been released in English already and is currently the most recent release in Japan as well, so we could be in for quite a wait for Volume 7 after this.

Overall, Combatants Will Be Dispatched! Volume 5 successfully introduces a new character and sets the stage for a much bigger storyline to come. Although the previous book remains my highlight of the series so far, this one is also home to one of the better stories we’ve seen. 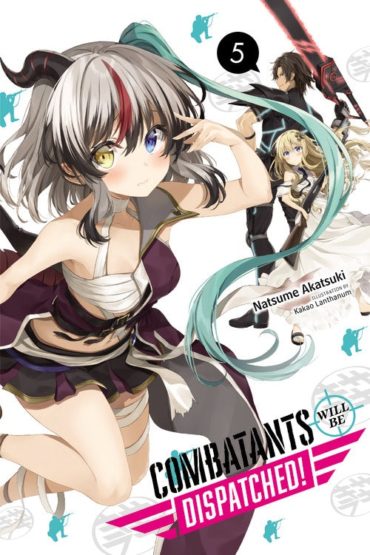 Title
Combatants Will Be Dispatched Volume 5