In the previous volume of Combatants Will Be Dispatched! our heroes caused chaos during the Undead Festival and attempted to build a base for themselves. Now we’re into Volume 4 and a week has passed for the cast since the previous instalment. Having had their finished headquarters blow up yet again, Six and the team decide to summon one of Kisaragi’s Supreme Leaders to lend a hand!

Having read the reports that Agent Six and Alice send back to Earth, the three Supreme Leaders have been itching for a chance to go to the alien planet they despatched Six to. Our heroes decide to call in scientist Lilith, who is known for her peerless intellect and arsenal of deadly weapons, which are sure to come in handy for taking down whatever is constantly blowing up the new base.

Of course, Six neglects to mention that the base is constantly under attack and instead invites Lilith over, ostensibly to see the hard work they’ve put into claiming a piece of the kingdom for themselves (never mind the fact it’s next to a deadly forest!). Once Lilith arrives, she wants to head straight back to Earth but the teleporter takes two weeks to build so, for now, she’s stuck there!

While waiting for her chance to escape back to Earth, Lilith decides it’s worth trying to solve some of the problems our cast have been facing. For starters, she attempts to restore a water source to the Kingdom of Grace, but accidentally frees a giant evil slime! Then she goes on a monster hunt with Snow and Six, which results in Snow going missing and Six being held captive by a sparrow-like creature. If that wasn’t enough, Lilith even goes so far as to challenge the Demon Lord to a fight…

Lilith is disappointed by her failures in front of Six, but she’s also struggling to come to terms with the subordinates he’s recruited in this world. Snow seems easily controlled by her desire for pretty swords and money, but the cursed Grimm is a whole other story. Despite the fact she originally invented Alice, Lilith is having nothing but trouble with her rebellious android too. Is nothing simple here?

I mentioned in my review for Volume 3 of Combatants Will Be Dispatched! that it felt like the series was taking the time to focus on one character at a time and I think that’s true here too. Although we see Snow, Grimm and Rose for a little bit here and there, this volume is much more focused on Lilith and Six. Since Lilith is a character we’ve only seen fleetingly up until this point, this ends up being a good thing.

I’m not sure if it’s because the illustrations make Lilith look like Megumin from Natsume Akatsuki’s KonoSuba or just her personality, but I became her fan almost instantly. She’s smart, adventurous and the perfect character to lead an evil organization. I think it’s entertaining how she’s parachuted in as this OP saviour and yet ends up struggling just as much as Six does with this ridiculous world. Perhaps most importantly, however, she’s not a permanent fixture in this world, with her returning to Earth by the end of the book.

Now that we’re multiple volumes into Combatants Will Be Dispatched! it seems that author Natsume Akatsuki has settled into a groove. Rotating characters in and out, while focusing on smaller storylines gives us as readers the chance to better understand everyone’s motivations and grow closer to them. Most of all, it’s fun.

In Akatsuki’s afterward, he reminds us that this series is a comedy first and foremost with KonoSuba being a better offering for those looking for a traditional adventure story. I think back in Volume 1 it was easy to lose sight of the comedic focus since the story of conquering a world is so ambitious, but as the series goes on I’ve been able to adjust my expectations accordingly. In the end, I think I prefer the direction the light novels have been taking in the last couple of books instead of earlier on.

Volume 4 of Combatants Will Be Dispatched! comes to the West thanks to Yen Press and continues to be translated by Noboru Akimoto. The translation reads well with no issues to speak of. Volume 5 of the series is currently scheduled for release in February and with Japan only being up to Volume 6 as of September, I imagine the English release schedule will begin to slow down now.

Overall, Combatants Will Be Dispatched! Volume 4 offers an entertaining story focused around a new character. Our ragtag band of heroes are caught up in all kinds of trouble with the arrival of Supreme Leader Lilith, but perhaps they’ve made some progress toward conquering this world… 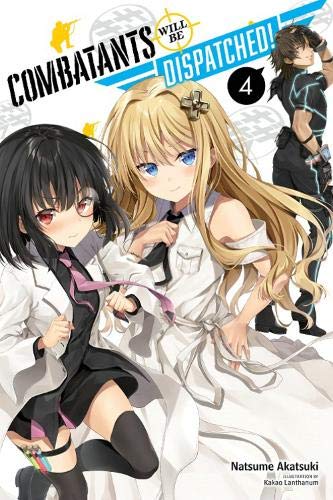 Title
Combatants Will Be Dispatched Volume 4