With the news that Natsume Akatsuki’s beloved light novel series Konosuba is due to end with Volume 17, fans of his work will surely be looking at his other books to fill the gap left behind. Luckily Yen Press has just the thing as they release Volume 3 of Combatants Will Be Dispatched!

In the previous volume of Combatants Will Be Dispatched our team were sent to the far-off Kingdom of Toris to resolve a water crisis. Now the group are back in the Kingdom of Grace, but new troubles face them as the annual Undead Festival approaches…

Having successfully avoided a war with the Kingdom of Grace, Agent Six and his team set their sights on expanding their territory and building a proper base for themselves. The problem is that to do that they need Evil Points, the currency all Agents of the Kisaragi Corporation earn for doing evil deeds. After Six spent all his on summoning a Destroyer to help win the battle at the end of Volume 2, he’s all out of points now.

While Six worries over earning points to accomplish the team’s new goal, Grimm is off helping out with the Undead Festival. The festival sees her making vessels for souls to temporarily inhabit and interpreting conversations between them and the loved ones they come back from beyond to visit. It’s a lot of work for one person and so Grimm asks Six and Rose to help out, but naturally, nothing goes right when you get those two involved!

Rose ends up pretending to be someone’s dearly departed pet to make up for them never coming back to visit and Grimm is constantly being resurrected by Six after fighting off evil spirits. Worse still, there are rumours a minion of the Demon Lord is among the spirits and looking to cause havoc in the Kingdom of Grace.

While Volume 2 of Combatants Will Be Dispatched was Alice focused, it’s fair to say that this volume is Grimm’s story. The rest of the cast take a backseat as her story unfolds and I think that works well. Grimm is a character that doesn’t get to do much usually, partly because her curses almost always miss the enemy or simply because she dies at the drop of a hat (left to be resurrected once the fight is over).

Despite her unfortunate lack of abilities in a fight, Grimm is one of the more sensible members of Six’s party. She and Alice are usually the voice of reason and in turn, Six does seem to hold Grimm in high esteem. Watching her host the Undead Festival also shows that the residents of the Kingdom have a lot of respect for her too.

While I found myself conflicted in Volume 2 as Six’s team were more hero than villain, this volume does a much better job balancing the narrative. While not everything our cast does can be considered bad, their actions are certainly more in line with the evildoer natures we came to know in Volume 1.

As previously mentioned Combatants Will Be Dispatched Volume 3 comes to the West thanks to Yen Press and has been translated by Noboru Akimoto. As always the translation is problem-free. Volume 4 of the series is currently scheduled for release in September.

Overall, Combatants Will Be Dispatched Volume 3 offers an entertaining story revolving around Grimm. After a bit of a shaky narrative in Volume 2, it’s nice to see the series return to form for this instalment. 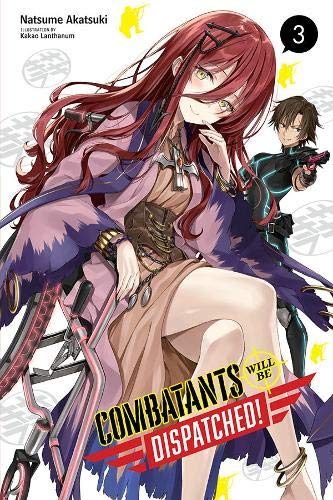 Title
Combatants Will Be Dispatched Volume 3