Over the summer Fairy Tail made a triumphant return to the English market with the first volume of sequel series Fairy Tail: 100 Years Quest. Now with the release of Volume 2, I’ve followed up to find out if the manga is still worth your time.

As we return to our heroes once more, they’re facing off with the Dragon Eaters of the Diabolos guild. With the fate of the Water Dragon resting on them, Natsu and crew fight their hardest to overcome Diabolos and figure out a way to save their new friend.

Elsewhere Jellal is still keeping close tabs on Fairy Tail’s newest guild member, Touka. Having heard nothing but horrifying things, Jellal is convinced that Touka is up to no good but is prevented from looking into her further by Laxus. Jellal pleads with Laxus to hand Touka over to him, but Laxus refuses and reminds him that background doesn’t matter to Fairy Tail and that even Jellal has a dark past.

After their run-in with Jellal, Laxus asks Touka if there’s anything she’d like to get off her chest. He goes on to explain that as long as she’s a part of Fairy Tail they’ll protect her, but should she be hiding something that brings danger to the guild she’ll no longer be welcome. Will this encourage her to come clean, or is Laxus going to regret protecting her?

In my previous review, I praised Fairy Tail: 100 Years Quest for balancing its large cast of characters and that continues with Volume 2. Although most of our time is spent with Natsu’s team, we frequently return to the guild and our cast there. This volume even finds time to bring back Brandish, an enemy turned friend from toward the end of the original series.

Brandish is searching for Aquarius’ key, but that doesn’t stop her lending Lucy a hand. Although she’s not ready to join Lucy and friends on their adventures, she does vow to race Lucy to find Aquarius’ key and it’s clear that the two are slowly developing a firm friendship. As someone who was particularly fond of this storyline in Fairy Tail, I’m certainly happy to see Brandish make a return for 100 Years Quest.

Perhaps the most important thing this volume does is deliver some excellent action scenes. Back in Volume 1, I found myself concerned that artist Atsuo Ueda wouldn’t be able to do Hiro Mashima’s battles justice, but thankfully this instalment relieved me of my worries. The fights between Natsu’s team and evildoers of Diabolos are just as ambitious, striking and gripping to read as anything from the original Fairy Tail. It’s a real joy to see that Ueda can keep up with Mashima’s story and layouts just fine.

It’s probably worth mentioning that there are a couple of magic upgrades for Erza and Wendy, with the two now able to use Dragon Slayer magic. Well, Erza has a new sword that channels it, which is reasonable enough, but Wendy suddenly has the ability to imbue others with it, which certainly wasn’t possible in the original Fairy Tail! I hope we get a backstory for how Wendy learned this magic at some point, rather than it just being a convenient new ability.

This volume of Fairy Tail: 100 Years Quest comes to the West thanks to publisher Kodansha Comics. The series continues to be translated by Kevin Steinbach and the translation is problem-free. Kodansha currently has the third volume scheduled for release in February.

Overall, Fairy Tail: 100 Years Quest continues to offer the best of the well-loved franchise. With an intriguing story, varied cast of characters and action-packed fight scenes, this is a sequel series not to be missed. 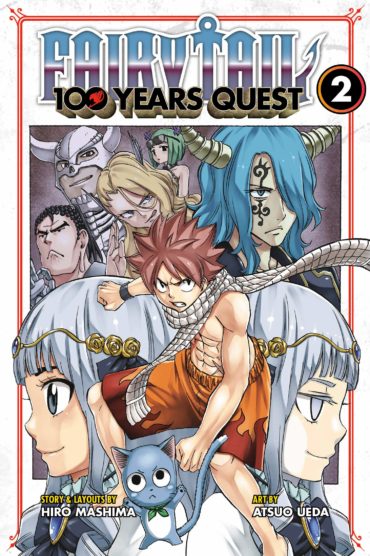 In Volume 5 of Fairy Tail: 100 Years Quest, Natsu and his party continue to fight both friend and foe alike, while trying to protect the Wood Dragon. Will they succeed or end in defeat?