This season fan favourite My Hero Academia returned to our screens for a fourth season and if that wasn’t enough, there is another volume of My Hero Academia: School Briefs! As this light-novel spin-off reaches its third volume, I return to find out if it’s still a fun read.

Volume 3 of the series takes place as our heroes begin moving into their new dormitory, Heights Alliance. However, before we reunite with the students, we first spend a night with All Might and Aizawa as they go out drinking after a day of gathering permissions for their students to move into the dorm. When the No. 1 Hero and quiet Aizawa get together an awkward silence hangs over them but it’s not long before other teachers get wind of the gathering and join in, swapping the silence for drunken antics.

With the night out over, we move on to move-in day for the kids, which shows us that not everyone is going to be able to live here quite so easily. Coming from a firmly ‘Japanese’ style house, Todoroki misses the tatami mats and sliding doors he associates with home. In searching for a way to make his room more homely, he passes by his friends, who have problems of their own. Be it Iida struggling to work out how to order his books or Yaoyorozu deciding which of her many possessions from home to keep. Things are certainly off to a hectic start!

Elsewhere in this volume, we follow a day in the life of Iida, experience a night of spooky stories and spend a day with Koda’s pet rabbit, Yuwai. Perhaps the biggest selling point of this volume though is the bonus chapter titled: U.A. Quest. In this special chapter, our heroes swap their daily lives for the fantasy setting depicted in the second ending for Season 2 of the anime.

Although the bonus story is only 25 pages long, it was easily my favourite among the tales in this volume. Since that ending first aired I’ve wondered what would happen if My Hero Academia swapped its fairly normal (beyond the ‘Quirks’) setting for a fantasy one and I was captivated by the merchandise and designs that went along with the ending. I love it and so this chapter went a long way in satisfying my desires. Although it’s a simple story about the rise of a demon lord and the heroes who set off to destroy it once and for all, it’s great fun to read. I hope this setting is revisited in the future, but I guess we’ll have to wait and see!

The U.A. Quest aside, I enjoyed all of the stories in this book. Once again, author Anri Yoshi manages to balance time spent with well-loved characters and those we don’t see as much of. The story about Yuwai, in particular, gives us a look at Koda in a completely new way. Setting this volume around the students joining the dorms works out better than Volume 2 in terms of the variety it can offer and Yoshi takes advantage of that well.

This volume of My Hero Academia: School Briefs comes to the West thanks to publisher VIZ Media. The series continues to be translated by Caleb Cook and the translation reads well, with no obvious problems. Like previous volumes, this one includes a fold-out colour page, one side of which depicts the cast in their fantasy costumes. VIZ Media currently have the fourth volume of the series scheduled for release in March. 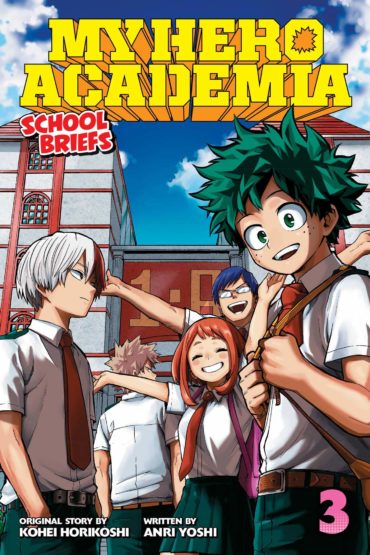