The anime My Hero Academia might not be currently on our screens, but with the manga now in its final arc, the series is certainly on our minds. Here to offer us even more of this fascinating franchise is Volume 5 of My Hero Academia: School Briefs, which promises some more fun-filled side stories with the cast.

This book opens with our cast preparing for the New Year and partaking in their end-of-year cleaning around the classrooms. Everything is going just fine until Ida, Koji, Tokoyami and Shoji go to throw some trash out and end up falling through the ground into a hidden dungeon?! Worried that villains may have set up a hideout under the U.A. High School, the boys begin to explore in the hopes of finding out what’s going on. However, the truth of the matter will shock everyone…

The second of five stories included in this book takes place on Christmas Eve, where the teachers of U.A. have come together to give Eri a Christmas to remember. Eraser Head brings the little girl to Class 1-A’s Christmas party and afterwards, he and the others prepare to play Santa and give her a gift. Naturally, the teachers haven’t coordinated all that well so instead of one group giving Eri a gift, many of them have come prepared! Not only that, the security in Eri’s room has been improved and the teachers soon find themselves caught up in it. Will they be able to give Eri her presents without her waking up and discovering that Santa is Eraser Head and the others?!

Rather than a large ensemble piece, the third story is just focused on Todoroki as he returns home for a Year’s-End soba meal. Together with his sister Fuyumi and brother Natsuo, the siblings are looking forward to spending some time together (despite the fact that Natsuo is not looking forward to seeing Endeavor). This tale is probably the one that ties into the current arc of the anime the most, as Todoroki and his family have been given plenty of attention in the fifth season!

The fourth chapter focuses on Deku and Bakugo as they continue their work-study with Endeavor and come across some childhood friends in need! One of the two is soon moving away from the town they live in, so the other has understandably become quite upset. They were also supposed to be taking part in a competition together which is now off the cards. So it’s up to Deku and Bakugo to fix the relationship before the two kids are left with regrets.

For the final chapter, we return to U.A. where classes 1-A and 1-B come together for a hot pot party! This is a really entertaining way to see out the book and gives us a chance to get better acquainted with the 1-B characters when they’re not facing off against 1-A or embroiled in some kind of fight to survive against villains.

In the afterword for this book, original creator (and illustrator) Kohei Horikoshi talks about how glad he is to have some fun stories since the arc he’s currently working on is so serious in tone. I think that feeling will also extend to the wider fanbase who are looking for something a little lighter. And it’s certainly true that this entry in the series both gives us something to relax with while also building on the characters that are the pivotal point of focus in the series right now (especially the anime). I also appreciate that it is set at and has been released near the end of the year, which just adds some extra charm to the whole thing.

Volume 5 is a more varied read than Volume 4, which is welcome since if you weren’t invested in the School Festival, then you weren’t going to enjoy that particular entry. At least here we get a greater variety of stories and settings, which keeps things interesting.

Just a small warning that if you haven’t yet watched Season 5 of the anime, then be aware that there are spoilers for it in this book. I’d highly advise making sure you’ve watched that before reading this release if you’re not already reading the manga. It’s a shame that, like Volume 4 before it, this entry is so dependant on you knowing what’s happening in the main series but I suppose so far in, there isn’t much room to work around that.

My Hero Academia: School Briefs Volume 5 comes to the West thanks to VIZ Media and continues to be translated by Caleb Cook. The translation reads well with no issues to note. Like previous releases, this one includes a fold-out colour page at the beginning which shows off the cast enjoying their Christmas party. Volume 6 of the series was released in Japan in October and while VIZ has yet to schedule it, I imagine we’ll see it sometime next year.

Overall, My Hero Academia: School Briefs Volume 5 is another fun entry in the light novel series. It’s a perfect way for fans to see out the end of the year, provided they’re caught up with the anime at least!

A free preview of the book can be read on the VIZ Media website here. 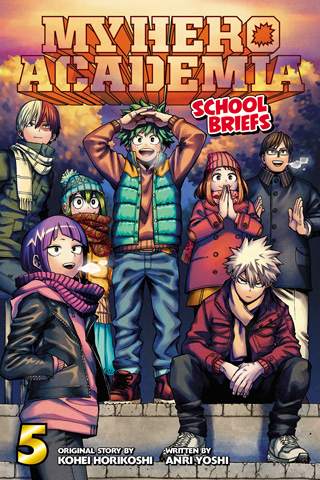