My Hero Academia is a shonen series with a variety of spin-off material already, but this month publisher VIZ Media has brought yet another one to the English market. The latest addition to the franchise is My Hero Academia: Team Up Missions, which promises to put the focus on some of the lesser-seen characters. Does it deliver? Let’s find out!

Our story begins with U.A. High School embarking on a new project called the Team-Up Missions Program. Students taking part in this are paired up into groups and then sent out to work with pro heroes, which will allow them to be mentored while also gaining valuable hero experience.

In the first chapter Deku, Uraraka and Bakugo are teamed up with the Rabbit Hero Mirko. While she’s not interested in teaching them, she does put them through their paces chasing down villains who are waiting for the three to show their qualities as heroes. While Deku initially doesn’t get to show off his abilities, when the group later comes across a young boy who appears to be a villain, our protagonist quickly realises that not everything is as it first seems and jumps between friend and foe to get to the bottom of the situation.

The second chapter places Deku and Bakugo under the care of the Number Two Hero, Hawks, and this story is less about what the boys can learn from Hawks and more about showcasing how much the mentor comes to care for the two. Given how much recent storylines in the main series have revolved around Hawks, this certainly gives readers a new perspective on him which I’m sure many have been eager to see.

Elsewhere, the third chapter of the book puts the focus on Melissa, a quirkless girl who focuses on working in hero support (where she makes gadgets and builds suits to help the heroes). If you’ve watched the first My Hero Academia movie then you’ll remember her as one of the main characters in that storyline. Her inclusion here is a surprising one, but certainly one I can appreciate!

As you may have guessed from these summaries, My Hero Academia: Team Up Missions takes place quite far into the series timeline. While I’m not sure exactly where it takes place, the fact Hawks is the Number Two Hero implies it’s after All Might retires. Melissa’s involvement puts it beyond Season 2 of the anime at a minimum.

Having said that, I don’t think you have to be up to date with the main series to enjoy this book but it will significantly improve your experience. Volume 1 includes three chapters as well as three one-shots, which were published in different magazines than the main series but are just as much fun to read. My Hero Academia: Team Up Missions is published in Shonen Jump GIGA in Japan, which appears to be released quarterly. This means that despite being on-going since 2019, the series has only just reached enough chapters for a second volume in Japan and so no doubt will be releasing very slowly in English.

The series is handled by mangaka Yoko Akiyama (who has one other series in Japanese before this), and I was surprised how much like My Hero Academia’s creator Kohei Horikoshi’s art Akiyama’s work is. Despite being a spin-off under a different creator, it certainly feels like the series would be right at home as an arc in the main series.

Akiyama doesn’t get the chance to show off too many battle scenes since the majority of the stories here are focused on character development, but those we do see are well-drawn. There are some wonderful two-page spreads at the beginning of chapters too! Perhaps what I appreciate most of all is that Akiyama’s character designs stay very close to Kohei’s. Deku sometimes looks a little more feminine than we’re used to seeing elsewhere, but that’s certainly not a problem.

As far as the story goes, it’s clear that Akiyama loves My Hero Academia as much as we readers do and they fully intend to make use of the large cast we’ve met in the main series. Including Melissa shows that Akiyama has no qualms about including anime original characters either, which is nice to see and makes me excited to see who we’ll see in future instalments! I just hope that Akiyama moves away from focusing on Deku and Bakugo since it would be nice to see some of the other kids in the spotlight.

As previously mentioned My Hero Academia: Team Up Missions Volume 1 comes to the West thanks to VIZ Media. Because I read the series through the Shonen Jump vault, I’m unfortunately not sure who is responsible for the translation or lettering, but I can at least say they did a great job! The terminology used in the translation is accurate to the main series, which is the most important thing. The series is on-going in Japan at 2 volumes, although Volume 2 isn’t currently scheduled for an English release (probably due to having only just come out in Japan!).

Overall, My Hero Academia: Team Up Missions is a welcome addition to the series. While this first series is still a little too focused on Deku and Bakugo, it’s clear that there is a lot of scope for changing that in future chapters. Most of all, if you’re into anything and everything My Hero Academia then you’ll appreciate seeing more of the series’ large cast. 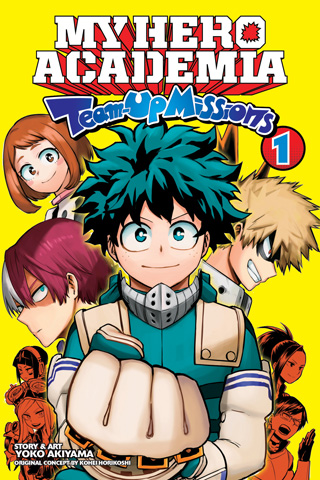