The latest season of My Hero Academia’s anime may have come to an end, but that doesn’t mean there isn’t plenty more of the franchise to enjoy. One such example is the latest entry in the My Hero Academia: School Briefs light novel series, which I’m here to review today!

This fourth volume of School Briefs takes place during the school festival arc of the main series, which the anime adapted in the last season. The book includes 6 chapters, which give a behind-the-scenes look at the festival.

The main draw of this book is the chapters centred around the beauty pageant and Class 1-B’s play “Romeo and Juliet and the Return of the Prisoner King of Azkabum”. Since the play was always meant to be a competitor against the concert our main characters put on (seen in the main series), it’s nice to find it covered in full here in the spin-off. It also gives us some solid character development for the members of 1-B, whom readers will no doubt want to know more about after their active part in the anime.

Of course, that’s not to say the shorter stories on offer here aren’t interesting. This volume of School Briefs also sheds light on the origin of the candy apple Deku gives Eri at the end of the festival as well as a teachers’ get-together after the festival concludes. They might not be the most captivating of stories, but they’re cute and fans of the characters will enjoy them.

In the afterword for this volume of School Briefs, creator Kohei Horikoshi comments how happy they are to see the school festival fleshed out since they didn’t get to spend that long on it in the manga. I think that’s a feeling fans of the series will also share – at least I certainly did.

It’s always nice to follow our cast as they get the chance to act like normal kids, rather than the heroes they’re training to become. As School Briefs has continued, author Anri Yoshi has managed to strike a perfect balance of where to place these stories and which characters to focus on. It’s not that the first volume or two were bad by any means, but I think there has been a clear improvement recently.

The only downside here is that this is the first instalment of School Briefs to be heavily tied to the story in the manga. Even with Volume 2 (set during the training camp), it was easy enough to read without any significant awareness of what had been happening in the main series. With Volume 4, if you’ve not read the school festival arc in the manga (or watched the anime) then you certainly can’t just dip into this light novel and have it make much sense, which may put some readers off.

Volume 4 of My Hero Academia: School Briefs comes to the West thanks to VIZ Media and has been translated by Caleb Cook. The translation reads well with no issues to speak of. As always, this volume includes colour pages at the beginning, which this time show our cast in their school festival costumes. It’s worth noting that this is the most recent volume of School Briefs in Japan, so we’re now all caught up!

Overall, My Hero Academia: School Briefs Volume 4 is a worthwhile companion to the latest arc of the anime and for those looking for more stories set during the school festival. Author Anri Yoshi has once again struck the perfect balance of offering charming short stories and interesting character development. 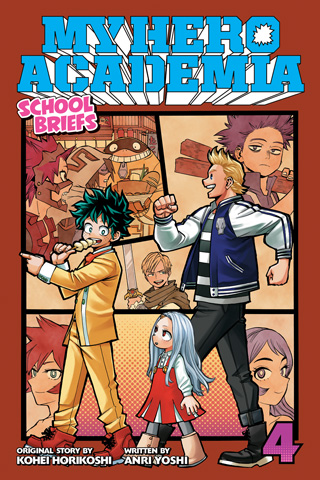