Two men together in an anonymous hotel bedroom. It’s not a casual hook-up, for it seems they know each other from university days. Wataru Imagase, is a private investigator and is working for Chikako, the wife of the other man, Kyoichi Otomo. He tells Kyoichi that he has proof that he’s been unfaithful to her. But he won’t reveal the truth to Kyoichi’s wife if he agrees to kiss him. Just that. Nothing more. At this stage.

And so we learn that Imagase has had feelings for Kyoichi since their carefree days in the university tennis club. Since then, Kyoichi has slept with girlfriend after girlfriend, opting eventually for a marriage that’s already on the rocks. Imagase has had boyfriends – he’s in a relationship now – but he’s ready to walk away if there’s the slightest chance of seducing his beloved senpai. Imagase insists that he’s been in love with Kyoichi all this time. Or has he just been obsessed? What’s the difference between love and obsession? His chosen profession gives him the skills to pry into Kyoichi’s life, to read his emails and track his movements. 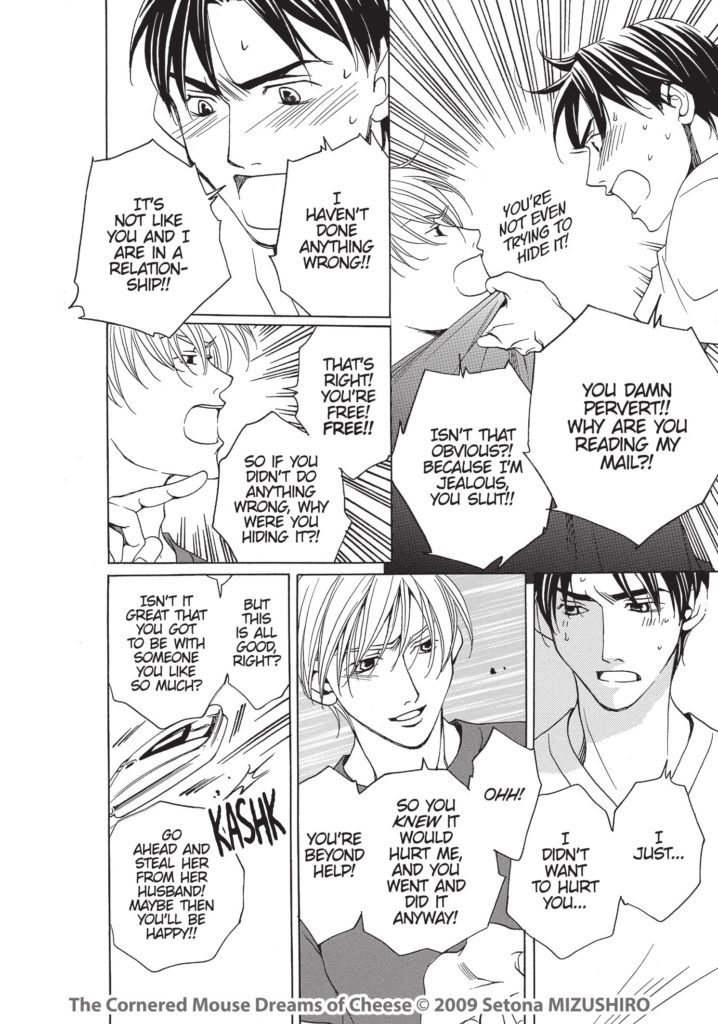 One kiss leads to another and Kyoichi finds himself unable to resist Imagase’s advances, even though he insists (somewhat feebly) that he’s not gay. Kyoichi recognizes that – at some profound level – he is not able to say no but he doesn’t know why. He’s conflicted. At one level, it’s deeply flattering to know he’s desired and at another, it’s deeply disturbing to realize that Imagase’s tactics are those of a stalker. And then, who should show up but Natsuki, Kyoichi’s girlfriend from university days… 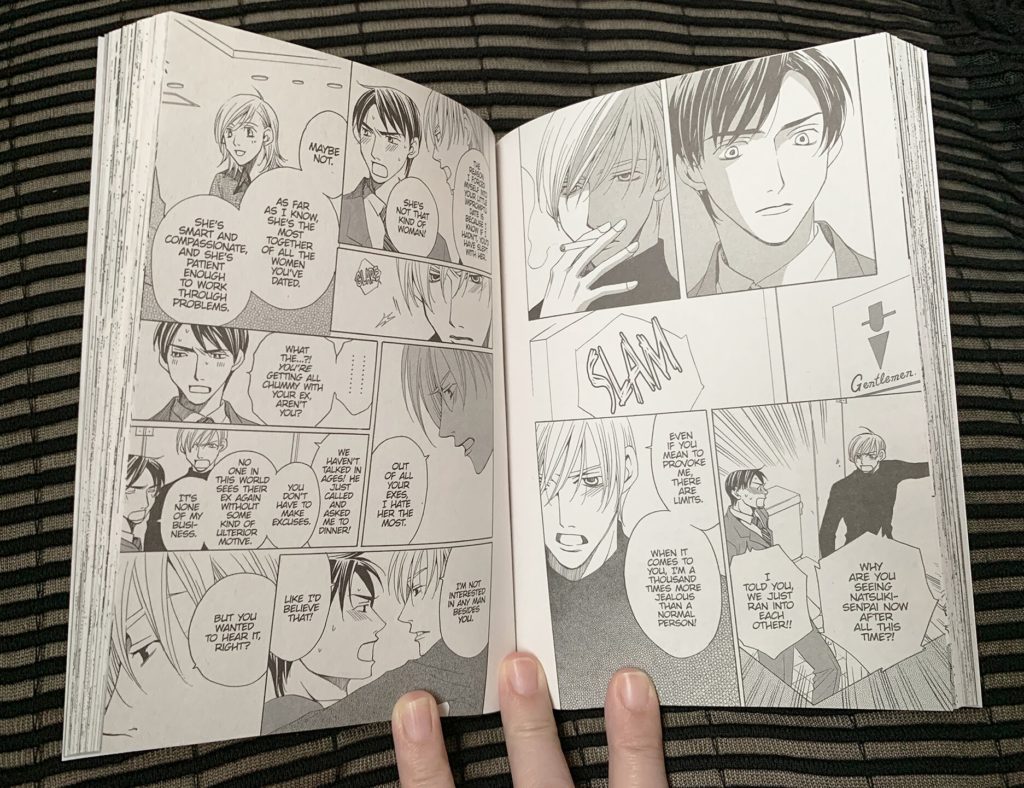 The dialogue sizzles as each bruising encounter drags the two men deeper into the snares of their mutual attraction which one constantly denies but is too lazy to wriggle out of while the other constantly swears his eternal devotion.

Nobody comes out of this in a good light. Everyone is flawed. Everyone is deceiving themselves – as well as the others in their lives – by the lies they tell themselves to get what they want. But somehow you don’t dislike them for their deceitfulness because it’s so believable.

Setona Mizushiro first caught our attention with the dark and imaginative LGBT+ series Afterschool Nightmare (2004). It’s been a long wait for us to get an English edition of The Cornered Mouse Dreams of Cheese and its sequel but, thanks to Seven Seas, the wait is over. Even though this manga was first published in 2006, it’s feels fresh and up-to-date (unless you look at the cellphones).

The all-important dialogue is wonderfully brought to life in Jocelyne Allen’s translation (a great choice of translator to convey the subtle shifts of mood and feelings in this title) and the adaptation is  by Lillian Diaz-Przybyl.

This manga earns its Mature rating with some realistic and explicit scenes. However, unlike several recent BL titles, these encounters are always earned – they’re there because they tell us about the shifting relationships between the characters and the power dynamics involved. And Setona Mizushiro – who has a very distinctive and easily recognizable graphic style – amplifies and intensifies the impact of these scenes with her skillful portrayal of the characters’ emotions in their facial expressions. The pictures speak – even without the dialogue, but when enhanced by the dialogue (or the characters’ thoughts) they convey so much more to the reader. Even though she’s produced other engaging (though non-BL) work since this title (Black Rose Alice, Shitsuren Chocolatier) this is probably her most intense and compelling love story. Like 10 Dance by Inouesatoh, this is manga for grown-ups: nuanced, bitter-sweet (with more bitter than sweet here) and difficult to put down. There are so many subtle little touches that it repays several readings…and the reader will be left impatient to read the sequel The Carp on the Chopping Block Jumps Twice, which will be released in February 2020. There’s also a live film version on the way. 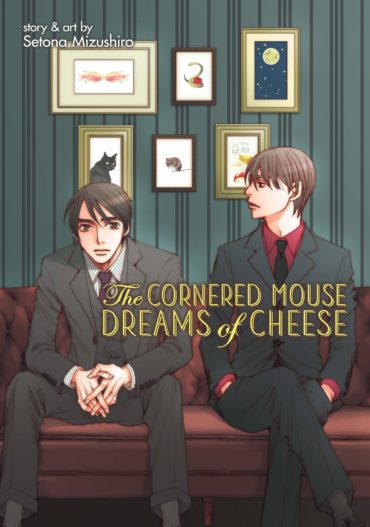