In the third volume of Snow White with the Red Hair, protagonist Shirayuki was put on the spot by Prince Izana and told she must prove herself worthy of walking beside Zen. Will Izana’s interference strengthen the bond between the two or put Shirayuki off from following her heart? Let’s find out as I take a look at the fourth entry in this beloved shojo series.

The beginning of this volume finishes off the arc started at the end of Volume 3, where Shirayuki and Zen are trying to prove the worth of friend Kihal and the birds that her village are known for. To do this, Kihal’s bird, Popo, has been sent to retrieve a message that Shirayuki is holding. This is to prove their potential for being used as messenger birds across the kingdom. The problem is that Shirayuki has been accompanied by Viscount Brecker who’s looking to ruin the demonstration!

Viscount Brecker locks Shirayuki inside the watchtower they’re waiting at, hoping that will prevent Popo reaching her. However, Shirayuki is more courageous than the Viscount thinks and jumps out of the window and into the lake below! With some help from Obi, the two complete the trial but Zen is upset to hear that Shirayuki was put in harm’s way once more.

The emotional turmoil of the whole ordeal ultimately leads Zen to kiss Shirayuki. Zen apologises for doing so out of the blue and promises that next time he will ask first, but, when that time comes, he hopes Shirayuki will tell him her feelings too. Now our heroine is left to wonder what she feels for Zen.

This volume of Snow White with the Red Hair sets out to finally bring Shirayuki and Zen closer romantically. As a reader, it has been obvious since Volume 1 that the two were smitten with one another and I appreciate that the series is willing to move the relationship along. It’s especially nice that Shirayuki has confronted her feelings (and told Zen) by the end of this volume where other series would have dragged it out for longer.

The second half of this is a flashback story focusing on how Mitsuhide came to work for Zen. In the present day, the two are as close as brothers, but in the past, Mitsuhide wanted to work under Prince Izana! However, spending time with the lonely and aloof Zen has led Mitsuhide to understand where he truly belongs.

Not only is the flashback incredibly sweet but it also offers some much-needed character development for Mitsuhide. Although he’s in the series a lot due to being one of Zen’s attendants, it’s not often the spotlight is shone on him. It would be nice to find out how Kiki came to work under Zen as well, considering she’s not with him during this flashback, so I hope that will be a focus in a future volume.

After complaining about it in previous reviews, I feel it’s worth mentioning how much mangaka Sorata Akiduki’s art has improved for this volume. The characters are more consistent from panel to panel and they have a wider range of expressions. I’ve always liked Akiduki’s art and it’s nice to see it cleaned up a bit compared to the past releases. Hopefully, it just keeps improving from here!

This release comes to the West thanks to Viz Media and has been translated by Caleb Cook. The translation reads well and is problem-free. Viz is continuing to release the series at a pace of a volume every other month, which I hope is a sign that the manga is selling well for them. I especially appreciate the speedy releases, given we have 17 more volumes until we catch up to Japan!

Overall this volume of Snow White with the Red Hair does a good job of both moving the story along and fleshing out its main cast. Fans of Mitsuhide will appreciate the flashback chapter, while other readers will be happy to see Shirayuki and Zen growing closer. 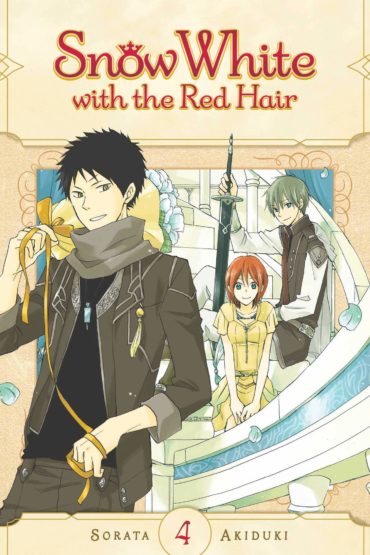 Snow White with the Red Hair Volumes 18 and 19 Review

Toka Bergat has turned traitor, Mitsuhide is wrongfully imprisoned and Zen is left to fend off the attack on Sereg Knight Base or face certain death in the first of two new instalments of Snow White with the Red Hair.