Those of you who enjoy playing JRPGs will be familiar with the Tales of series of video games from Bandai Namco. The latest game in this popular franchise was Tales of Berseria, a prequel to Tales of Zestiria (which was released before it) and which has now been adapted into a manga! Does the manga capture the thrilling story of the game? Let’s find out!

The story takes place in the Holy Midgand Empire where a disease known as Daemonblight is running rampant. The illness causes those infected to lose their humanity and transform into monsters known as Daemons, who can only be fought off by Exorcists. Our protagonist Velvet Crowe lives her day peacefully in the remote town of Aball with her younger brother Laphicet and brother-in-law Artorius, but even here the threat of Daemonblight is drawing closer.

Unfortunately, these peaceful days come to an end with the arrival of the Scarlet Night, where Daemonblight finally overtakes the residents of Aball. Artorius aims to put a stop to it but to do this, he needs a sacrifice and chooses Laphicet. Velvet, understandably, rushes to save Laphicet once she realises Artorius’ scheme but she arrives too late and ends up becoming a Daemon herself, but not an ordinary one – a Therion which lives to devour other Daemons.

From here the story flashes forward three years to Velvet imprisoned on the island of Titania where she waits for the day she can get revenge on Artorius for murdering her brother. One day she’s freed by a Malak (Malakhim are supernatural spirits) who used to work for Artorius. During her escape from the prison, Velvet helps fellow prisoners Rokurou and Magilou who then join our protagonist on her journey to achieve her justice. However, with Exorcists aware of Velvet’s newfound freedom and aiming to kill her, our hero certainly doesn’t have it easy.

If you’re already familiar with Tales of Berseria thanks to the game, then you’ll love this manga adaption. The characters are instantly familiar and brought to life in whole new ways. Even if you’re a newcomer, the story is welcoming and written in a way that makes it appealing for new and existing fans.

As someone who has played the game, one thing that stood out to me is how expressive the cast is. In the game, Velvet is very standoffish and moody in the beginning, but here she’s full of emotion and it’s easy to read her thoughts. Rokurou and Magilou also benefit from this change, but they were the comic relief in the source, so it’s not as different as Velvet is.

Ultimately I like how mangaka Nobu Aonagi has adapted the story into manga. The artwork is very detailed and the action scenes draw you in, while being easy to follow. Because the characters are so expressive there is a nice contrast between the serious moments and the comedy. This balance helps prevent the grimness of the plot becoming overwhelming.

The only minor concern I have is that this manga adaptation only ran for three volumes in Japan, which doesn’t feel like enough to fully adapt the story – despite the meaty volumes it’s released in. The adaptation has been faithful to the game so far, but I wonder if it will go for a manga-original spin as we continue. This is a problem Tales of Zestiria’s manga had as well, where it ran out of time to cover the source and went for something original (which no one was pleased about). Hopefully, Aonagi can still pull Tales of Berseria into something entertaining, but we’ll have to wait and see.

Tales of Berseria Volume 1 comes to the West thanks to Kodansha Comics and has been translated by Stephen Paul. The translation reads well and the terminology unique to the story are in keeping with the game’s English translation. This release opens with some eye-catching colour pages, which are a wonderful addition. The second volume of the series is currently scheduled to be released in January 2020 with the third and final volume heading to the West in April.

Overall, the first volume of Tales of Berseria is off to a solid start. This manga adaption is a great read for both newcomers to the story and those who enjoyed the original video game. Returning fans will especially enjoy seeing the cast in a whole new way.

A free preview for Volume 1 can be found on Kodansha’s website here. 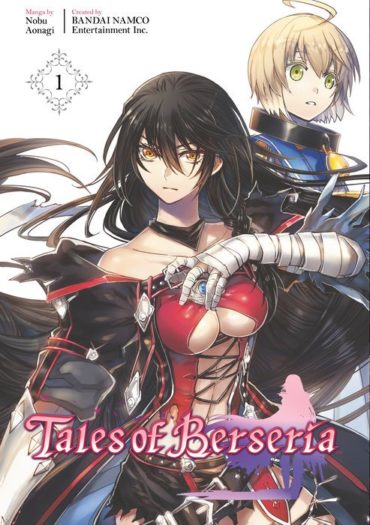 Overall, this volume of Tales of Berseria is a disappointment. Rushing through the video game’s material leaves it confusing and with an underdeveloped cast of characters.