Last summer, Yen Press began releasing the Bungo Stray Dogs light novels into English. With a satisfying first entry telling the story of Dazai’s entrance exam to the Armed Detective Agency, the first volume was a delight for fans. Today I’m here to find out what the second entry has in store and if it’s still worth your time.

This time the story is set while Dazai is still part of the Port Mafia and follows him, Sakunosuke Oda (referred to as Odasaku) and Ango Sakaguchi. Although the three have drastically different ranks in the mafia, they still forge a firm friendship and spend their free time drinking together. That is until the day Ango goes missing, an event that changes all of their lives forever.

When Ango disappears, the Port Mafia boss orders Odasaku to get to the bottom of it. As Odasaku investigates, he finds a trail leading back to foreign criminal organization Mimic – but was Ango kidnapped by them or a spy working with them? As the evidence mounts against his friend, Odasaku realises this case could be bigger than anyone thought possible.

While this book is marketed as being the story behind why Dazai quit the Port Mafia, it’s more focused on Odasaku and Ango. Dazai is certainly involved throughout, but almost the entire book is told from Odasaku’s perspective.

Being nothing but a lowly grunt, you’d think Odasaku would be a dull character but he isn’t. He has the potential to be one of the best in the Port Mafia because of his ability that lets him foresee the future by a few seconds, therefore being able to avoid taking any fatal injuries. The only reason he hasn’t risen through the ranks is due to his aversion to killing people, something which is explored throughout this volume.

If you’re already familiar with the Bungo Stray Dogs anime series then you’ll probably already be familiar with this story, which was adapted into Episodes 1 – 4 of Season 2. The anime was a faithful adaptation of this light novel, but I think there is still value to be found in revisiting the story, even if you’ve already watched it.

For one thing, the book is easier to follow, with you being able to read as much or as little as the story as you want, compared to waiting a week for every episode of the anime. Odasaku is also a very interesting character to be leading the story and I think his role may have been a bit overshadowed in the anime with fan-favourite Dazai being involved.

If you only read the manga and haven’t watched the anime, then this is mandatory reading, simply for how much it fleshes out Dazai and Ango’s characters. Seeing why Dazai left the mafia and why Ango ended up where he is now are both important factors in the source material, so definitely give this volume a look. The nice thing is that you don’t have to read these light novels in any particular order; they’re all self-contained stories, so you could just read this one on its own if you wanted to.

This volume of Bungo Stray Dogs light novels has been translated by Matt Rutsohn. The translation reads well with no issues to note. This release includes colour pages at the beginning (illustrated by Sango Harukawa), which depict the three main characters of the story. It’s nice to see how well suited Harukawa’s work is to full pages, compared to the confines of manga panels.

Bungo Stray Dogs Volume 2 is a must-read for fans of the franchise. The book solves one of the biggest mysteries surrounding Dazai’s past ,while giving an insightful glimpse into the lives of others in the Port Mafia. A story not to be missed. 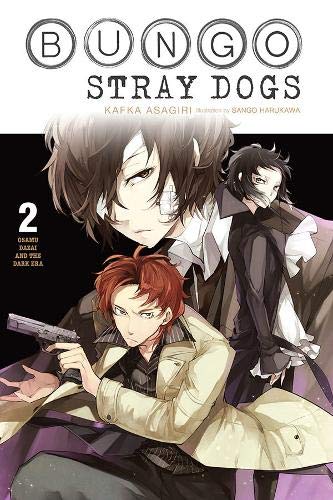