In the last light novel instalment of Bungo Stray Dogs, we were treated to the backstory for genius detective Ranpo. For Volume 4 of the series, we move back to the present day for a new story involving the whole of the detective agency!

This time around, the Armed Detective Agency has been sent to the floating city Standard Island which is off the coast of Yokohama. Standard Island was a jointly created project by Germany, France and England and is a holiday resort of sorts. However, a group of thieves are trying to steal something important and the Armed Detective Agency must put a stop to their plot!

Despite Kunikida’s warnings to take the job seriously, Atsushi and the younger members of the team can’t help but see this case as an opportunity to take it easy and enjoy some fun in the sun. When Kunikida reveals that they’re handling the case because it’s outside of the police’s jurisdiction, this only further cements the feeling.

However, not all is as it seems on Standard Island. When a bomb blows up the island, Atsushi is saved by a Skill User called H.G. Wells and sent back in time 55 minutes before the incident. Now he must put a stop to the bomb, while also not revealing to his teammates that he was sent back in time. To make matters worse, Akutagawa from the Port Mafia is also on the island and quickly gets in the way of our hero’s efforts to save everyone…

Volume 4 of Bungo Stray Dogs marks the first time Atsushi has been the protagonist of the light novels after the rest have all been set before his arrival at the Armed Detective Agency. Compared to those earlier entries this story takes place around Volume 10 of the manga (somewhere within Season 3 of the anime), which makes for a refreshing change.

Even if you’re not that far into the manga or anime, this story works well as a standalone piece. There aren’t any notable spoilers for the main series and in fact, I thought this took place earlier in the timeline than it does when I was reading it. It was only in the author’s afterword that my guess was proven wrong.

While Atsushi is one of my least favourite characters in Bungo Stray Dogs, it’s nice to have a story that follows the normal formula of the manga where the Armed Detective Agency is given a case and then work through it. Standard Island is a fascinating concept too and I enjoyed the idea of a city influenced by three different cultures. Author Kafka Asagiri paints a detailed image of the city and I find myself eager to someday see it in anime form (hopefully in a Season 4?).

The story being told this time around isn’t particularly deep or meaningful, but I think it still captures Bungo Stray Dogs at its best. With witty humour and an assembly of most of the characters we know and love, there is plenty to enjoy here.

Something I appreciate about these light novels is that Asagiri is writing these stories in such a way as to be independent both from each other and the rest of the series, meaning readers can dip in and out wherever they like. I think that’s especially important in a franchise like this where there are so many characters and not every reader is going to care for all of them.

Bungo Stray Dogs Volume 4 comes to the West thanks to Yen Press and continues to be translated by Matt Rutsohn. The translation reads well with no problems to note. Yen Press currently have Volume 5 scheduled for a release in December.

Overall, Volume 4 of this light novel series proves an entertaining read. While it’s not the best the franchise has to offer, it does put the cast into an interesting storyline the likes of which we haven’t seen before. These novels continue to be a great addition to the world of Bungo Stray Dogs. 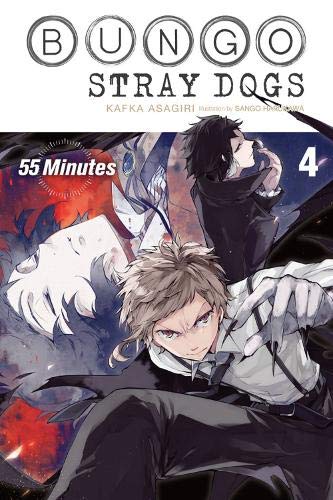