For Volume 5 of the Bungo Stray Dogs light novels, a new author and artist took control to give us a novelisation of the movie. With Volume 6, Kafka Asagiri and Sango Harukawa make their return with a story that is sure to delight many.

Volume 6 of the series is set in an alternative reality where Ryuunosuke Akutagawa joins the Armed Detective Agency while Atsushi Nakajima is a part of the Port Mafia. But this isn’t the only difference in this world as we find Dazai is head of the Port Mafia and Sakunosuke Oda (known as Odasaku) is still alive and a part of the Armed Detective Agency.

Much like Atsushi’s story in the main series, in this universe, Akutagawa was found starving and near death on a riverbank and brought back to the Armed Detective Agency. With no other prospects, he’s quickly recruited into the team, thanks to his powerful skill. Not only that but Akutagawa is searching for his sister and working at the agency gives him access to information he wouldn’t otherwise be able to get his hands on.

It’s not long before our protagonist figures out that his sister is being held by the Port Mafia and this brings him into contact with Atsushi. The two have similar backgrounds but have taken very different paths in life. Perhaps if not for that they could have been friends, but for now, they’re nothing but enemies.

While being a part of the Armed Detective Agency doesn’t change a lot about Akutagawa’s personality, the same can’t be said for Atsushi. He’s still paired up with Kyouka, but having never joined the Agency, he has no control over his ability to become a tiger and lives in constant fear of hurting those around him. Even going so far as to wear a spiked collar that digs into his neck while transformed.

I was hoping that a different universe with a drastic change in set-up would have prevented Atsushi from being whiny, but unfortunately, he’s as bad as ever. Perhaps he has more reason to be here than in the main series but, even so, it’s frustrating that Atsushi as a character is always stuck in this loop of constantly lacking confidence/complaining about his life.

One thing I do like about this new universe is the fact we get to see what Dazai would be like as head of the Port Mafia. As usual, he’s pulling strings behind the scenes and orchestrating things to fit his narrative. This includes making Akutagawa and Atsushi run into one another, in a bid to make both of them grow in new ways (much like what happens in the main series, really).

In the afterword for this book, Kafka reveals that one of the fun things about a story like this is is how introducing one change can have so many ripple effects on so much else. It’s not just the fact that Akutagawa and Atsushi have changed places but how much else in the story is different because of this.

As a reader, I certainly found this story enjoyable and wouldn’t mind seeing more like it or even just a continuation of this particular tale. If nothing else, I enjoyed seeing Odasaku alive again, since he met such an untimely death in the main series. It’s also interesting how the characters come together in similar ways to the main series, despite being in different positions. Almost as though it’s simply destiny. It’s very well crafted stuff by the author.

Bungo Stray Dogs Volume 6 comes to the West thanks to Yen Press and continues to be translated by Matt Rutsohn. The translation reads well with no issues to note. A manga adaptation of this volume is currently scheduled to be released in English starting in August. Volume 7 of the light novel series is scheduled for release in December.

Overall, Bungo Stray Dogs Volume 6 presents a fascinating what-if story that fans of the franchise will be eager to read. While it’s a bit of a shame that more isn’t done with Atsushi’s whiny personality, this one is otherwise a great book! 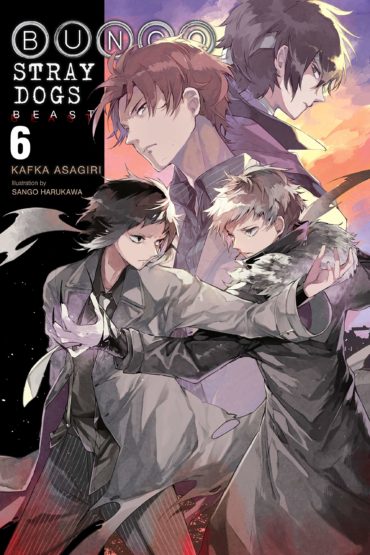