In the last volume of the Bungo Stray Dogs light novel series, we were offered a glimpse into Dazai’s past as part of the Port Mafia. With the arrival of the third instalment, it’s time to dive into the past of a very different member of the Armed Detective Agency. Is it a satisfying read? Let’s find out!

This time around Bungo Stray Dogs explores the humble beginnings of the Armed Detective Agency’s master detective: Ranpo Edogawa. This tale also doubles as the origin of the detective agency and how leader Yukichi Fukuzawa came to establish it.

Our story unfolds a decade before the Bungo Stray Dogs manga’s adventures began. Here, Yukichi is nothing more than a professional bodyguard, who is looking into the death of one of his clients. While investigating, Yukichi encounters Ranpo, an arrogant and unruly genius who was supposed to be having a job interview with the deceased.

Ranpo is frustrated by losing his job prospects, as a young boy who has lost several positions already and is struggling to make ends meet. However, at the crime scene, he begins to show promise to Yukichi as he quickly establishes who the killer is. Yukichi prefers to work alone, but seeing the potential in Ranpo, he begins to wonder if they wouldn’t make a great team together…

After Dazai’s past in the Port Mafia I think Ranpo and the beginnings of the Armed Detective Agency are the series’ biggest mysteries. If you’ve watched or read much of Bungo Stray Dogs, then you’ll be familiar with the fact that Ranpo thinks he’s a skill user, despite not having any abilities. This book also explores that aspect, showing us how Yukichi taught Ranpo to control his genius and focus only on what matters.

When it comes to the Bungo Stray Dogs series, Ranpo is my favourite character. I readily admit to being charmed by detective types and although Ranpo can come off as being annoying, he’s a great member of the cast. The important thing about this light novel isn’t just that it explores his past, so much as it justifies his behaviour.

After reading this book, you won’t be able to look at Ranpo the same way. Seeing him as a young teenager, who is confused by the world and hurt by the loss of his parents, it’s easy to understand why he becomes so boastful about his abilities later in life. This story shows his struggles and that humanises him more successfully than anything the manga has done so far.

Even if you’re not a Ranpo fan, this story is sure to be a hit with mystery fans. Even after the initial murder case where Yukichi and Ranpo meet, there is another incident which will keep readers guessing until the end. While it’s not quite as intriguing as the tale told in Bungo Stray Dogs: Another Story, it’s still well worth a read.

Also included in this volume is a short story exploring how the Armed Detective Agency came up with the entrance exam Atsushi takes at the beginning of the manga series. While a fun chapter in its own right, I do wonder if we could have done without it being in this volume. It doesn’t connect to Ranpo’s story much and feels like an odd way to open the book otherwise.

Volume 3 of the Bungo Stray Dogs light novels comes to the West thanks to Yen Press and has been translated by Matt Rutsohn. The translation reads well with no issues to note. As with the previous volumes, this instalment opens with colour pages depicting the lead characters of the story.

The Bungo Stray Dogs light novels continue to be captivating reads. This third volume shines the spotlight on genius detective Ranpo, which is sure to be a major hit with his fans. Even if you don’t have fond feelings for him, readers will still enjoy exploring the origins of the Armed Detective Agency. 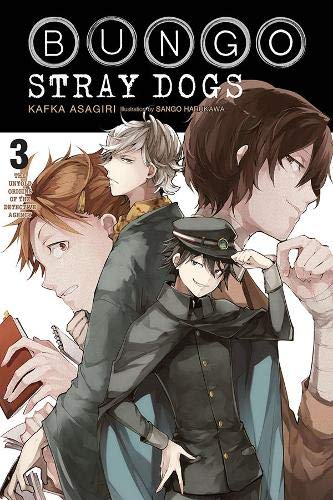