The story begins when protagonist Azusa dies from overworking. When she’s reincarnated into her next life, she’s reborn in a fantasy world as an undying, unaging (she starts in the body of a seventeen-year-old) witch. Having worked herself to death in her previous life, Azusa vows to leave out her days peacefully this time. The goddess who reincarnated her even gave Azusa a cottage to live in!

Even if she wants to live quietly, a witch still needs money so Azusa quickly sets out to register at the adventurers guild. There are plenty of slimes living nearby that Azusa can defeat and then sell the magic stones they drop to gain money. For three hundred years Azusa defeats slime every day, sells their stones and looks out for the villagers in the place she calls home.

However, one day her peaceful life is brought to an end. When the guild receptionist (who idolises Azusa) asks if she can check our protagonist’s status, they discover that Azusa has maxed out her level! Azusa is shocked to hear that this is possible just from killing slimes every day but the receptionist tells her that her efforts are the equivalent of slaying numerous dragons.

As news spreads of Azusa’s max level, she’s visited by many adventurers and creatures who wish to test their strength against her. Have her peaceful days forever come to an end just because of killing slimes?!

The original light novel series for I’ve Been Killing Slimes for 300 Years and Maxed Out My Level is a sweet slice-of-life series. It never delves into anything too serious and always approaches the story lightheartedly. I’m happy to say that mangaka Yusuke Shiba has captured the tone of the series for this manga adaption perfectly.

Shiba’s art is soft and bubbly, almost as if it belongs in a shojo manga. They don’t draw much in the way of backgrounds, which means that panels can sometimes be a bit plain. That said, the characters have a wide range of emotions and reactions. It’s always easy to tell what the cast are thinking, even the slimes who are simply blobs with eyes. It’s not the best artwork I’ve ever seen but it does the job for sure.

If you’re an existing fan of the series, then it’s worth knowing that the manga doesn’t greatly differ from the original light novels but does offer an entertaining read all the same. If you’re a newcomer, I’d recommend either medium for you to start with, depending on what you prefer. It’s not often a manga captures everything a light novel offers but I think in this case you wouldn’t be missing out. There is also an anime adaptation in the works, if you like what you see here.

I’ve Been Killing Slimes for 300 Years and Maxed Out My Level Volume 1 comes to the West thanks to Yen Press (who also publish the light novels) and has been translated by Jasmine Bernhardt who also translates the original light novels. The translation reads well with no obvious issues. However, while there aren’t any issues with the translation, there are some problems with the typesetting.

There are a few instances where the text isn’t centred in the speech bubble or is overlapping with the edge of a panel outside the bubble. There are also a few instances where there are what appear to be font coding error boxes scattered throughout the text. Combined with the text issues this really takes away from the quality of the release, especially given how expensive Yen Press titles are now. The one saving grace is that the error boxes issue seems to have been fixed or not ever existed for the digital release, so if you want a smoother read, that is an option.

I’ve Been Killing Slimes for 300 Years and Maxed Out My Level Volume 1 is an entertaining slice-of-life comedy. The novelty of the title draws your interest while the interesting twists and turns will keep you turning the pages. It’s just a shame that such a sweet series is plagued by issues in its English release. 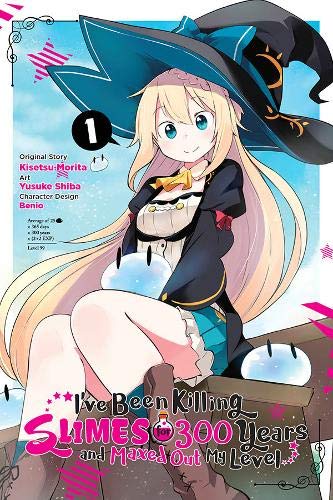