With Volume 4 of Skull-face Bookseller Honda-san in hand, we’re now at the end of the series. When we left Honda-san at the end of Volume 3, the author was in a pinch, having left their job at the bookstore and therefore lacking in materials for further chapters! Let’s find out how Honda got around that issue.

As we rejoin our favourite skull-faced bookseller, Honda’s editor has come to the rescue with some fresh ideas for the series. If you can’t tell stories from the perspective of the bookstore, perhaps you can instead focus on the publishers’ side of the story.

The first tale with this change in direction sees Honda-san visit a former senpai who now works with e-books. Although e-books are a huge part of the publishing market, they’re not something Honda-san had to deal with while working in the bookshop, so this opens up an opportunity to talk about how they differ from publishing and advertising a paperback release.

This focus on e-books eventually leads Honda-san to interview staff at Rakuten Kobo, one of the big e-book platforms in Japan. Here Honda-san learns how much effort goes into creating eye-catching banner adverts on the Rakuten Kobo website to get readers interested in reading certain titles.

After this Honda-san is sent overseas to learn how the Taiwan book industry works, which is a fascinating story. Taiwan has a large appreciation for Japanese media, so the market isn’t all that different to Japan but a lot of thought still has to be put into the books that are brought over and translated.

However, as interesting as these chapters are it’s clear to see that Skull-face Bookseller Honda-san would have been better placed ending with Volume 3. Because there is a lack of material to work with, Volume 4 has been filled out with ‘bonus’ content. These include sketches of the series’ cast, short comics posted on Twitter and some chapters from the author’s Pixiv account.

While I appreciated all of the extra content, I think it would be disappointing for readers who aren’t quite as invested in the series as I am. Especially when you consider the £12 price tag, which is quite a lot for only 4 chapters (compared to the 7 we’ve previously had). Perhaps the better thing to do would be to consider the series complete with Volume 3 and only seek out Volume 4 if you are interested in the extra materials.

Now the series is over I can safely say I’ve enjoyed everything the manga offered. It may have had its ups and downs, but I don’t think it was ever bad. Honda’s quirky cast of characters and a unique way of storytelling managed to see it through the more difficult periods. Anyone even vaguely interested in bookshops and the publishing industry will learn a lot reading this series and they’ll have fun with it.

Volume 4 of Skull-face Bookseller Honda-san comes to the West thanks to Yen Press and has been translated by Amanda Haley. The translation reads well with no issues to speak of. There are also many translation notes at the back of the book helping to explain some of the terms that come up in these chapters. This release also includes some colour pages at the beginning, which are wonderful to see. 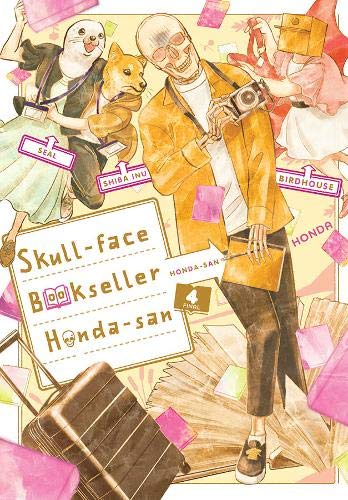