Some of you may already be familiar with author Kisetsu Morita thanks to their popular light novel series I’ve Been Killing Slimes for 300 Years and Maxed Out My Level. Before that, the author wrote a series called You Call That Service?, which Yen Press has brought to the West. Today I’m here to find out if Volume 1 of this romantic comedy offers an enjoyable read.

High-school protagonist Ryouta Asagiri has suffered nothing but hardship, thanks to a curse placed on him by his grandfather. Unlucky in love, his grandfather exchanged 30 years of his life for his grandson not to suffer the same fate. The problem is this worked too well and Ryouta is sought after by every girl that sees him!

Wishing for nothing but a normal life, Ryouta spends his days off school, hiking in the mountains away from humankind. One day he stumbles into the town of Akinomiya which, unbeknownst to him, has been taken over by vampires.

In the town, he meets a young girl (who is also attending high school) called Shiren Fuyukura who appears to be the first female to not be incredibly attracted to him. However, while Fuyukura may not have her sights set on him romantically, she quickly captures Ryouta in the hopes of turning him into her minion.

As it turns out, the curse placed on Ryouta doesn’t affect vampires like Fuyukura and, should Ryouta decide to stay in Akinomiya, he could live out his days relatively peacefully. In a town of vampires, his biggest issues are avoiding eating food with blood as an ingredient and being sought after by other vampires seeking a minion. Not half as stressful as his existence in Japan has been otherwise!

Reading You Call That Service? I couldn’t help but think of the beloved romantic comedy Toradora!. Fuyukura is a lot like Taiga: she’s short, quick to anger and surprisingly fragile under her tough exterior. Until Ryouta comes along she’s been living on her own and her only demand of Ryouta as her minion is that he never leaves her alone. Much like Taiga, Fuyukura’s life has been incredibly lonely.

Ryouta is also quite similar to Ryuji. He complains about doing Fuyukura’s bidding, but underneath it all, he soon becomes fond of her and couldn’t imagine his life without her. Being unable to spend much time around others due to his curse, this newfound partnership gives him a relationship he never felt was possible before.

While our two protagonists spend their days bickering with one another, it’s clear there is a firm friendship and that makes You Call That Service? a heartwarming and entertaining story. This first volume has a surprising amount of depth to it in terms of developing the main cast and also having Ryouta decide if he wants to return to Japan or stay in this quirky town.

The series is complete at seven volumes in Japan and from this first instalment that feels like a good number for it. There is quite a lot going on in the background of this story (like the fact Japan is surprisingly accepting the occupation of Akinomiya by the vampires), which could be built on as the series continues. I’m certainly eager to see what comes next for our heroes at least!

While I’m a fan of Morita’s other series, it’s nice to see something different from them. I’ve Been Killing Slimes for 300 Years and Maxed Out My Level is an isekai and on top of that doesn’t have any romance to speak of. You Call That Service? is refreshingly an old-fashioned romantic comedy, which is a pleasure to find in the isekai-infested market. I mentioned earlier that the characters reminded me a lot of Toradora!, but that extends to the writing as well. Morita’s jokes and back and forth between the cast are very similar to Toradora! and I think fans of that series would find a lot to like here.

As previously mentioned You Call That Service? comes to the UK thanks to Yen Press and has been translated by Jasmine Bernhardt. The translation reads well with no issues to speak of. Illustrations for the series have been handled by Hiroki Ozaki. The illustrations are attractive, although they all look a bit blurry around the edges of the characters. It’s obviously a stylistic choice but not one I’m especially fond of. 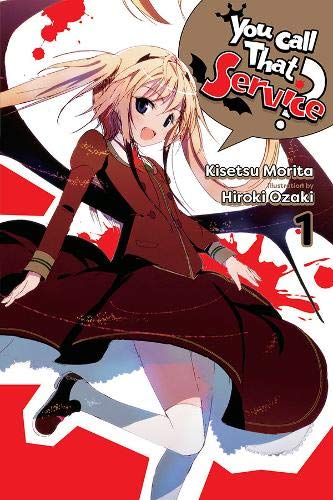 Title
You Call That Service? Volume 1