Volume 4 of vampire rom-com series You Call That Service? saw protagonist Ryouta go on a date with Sasara, one of Ouka Sarao’s guards. Naturally, this led to plenty of upset among the rest of the girls who also have feelings for Ryouta. Now that’s over and done with, let’s see how the dust has settled in Volume 5!

Ryouta is looking forward to returning to normal life after the date which almost led to his demise in the previous book, but it’s not long before a new problem rears its head! Ryouta suddenly finds himself with the urge to run to Archbishop Alfoncina’s side and ‘serve’ her. Alfoncina quickly realises that this is a side effect of her praying for his safety and sucking his blood, which means he’s turning into her minion!

Naturally, Ryouta’s actual master Shiren is furious that she might be losing him to someone else, especially Alfoncina who has often got too close for comfort to him for our heroine. Luckily there is still time to prevent Ryouta from fully becoming a minion, but the only cure is a herbal remedy sold exclusively in Japan. As it happens, Japan and the Sacred Blood Empire are about to meet to discuss their diplomatic relationship, which gives Ryouta and Alfoncina a chance to take a trip to the country as the Sacred Blood Empire’s representatives.

The trip is set to take two days, with the first being reserved for sightseeing and getting the medicine for Ryouta. Shiren isn’t thrilled about the two going off together, since Alfoncina could easily complete the ritual for Ryouta to become her minion (although she makes a written oath that she won’t) or make a romantic move on him. Ryouta is less concerned about Alfoncina and more worried about his curse, which makes him extremely attractive to women but hopefully with Alfoncina by his side, nothing as extreme as being kidnapped will happen…

Since the majority of Volume 5 revolves around the trip to Japan, it’s safe to say that this volume of You Call That Service? is centred around Alfoncina. She’s been a recurring character since the beginning of the series and although she doesn’t get on with Shiren, she’s always there to help Empress Ouka and has proved a trustworthy friend for Ryouta. It’s not often the two get to spend this much time together and it gives Alfoncina the chance to open up and reveal to Ryouta that she’s never had a friend before and she hopes that her relationship with Ryouta can continue for years to come.

Of course, there is more than just the feelings of friendship on Alfoncina’s side; like most of the girls in this series she has romantic feelings for Ryouta. After spending the day sightseeing together, Alfoncina is hoping to confess to him but how will he react to the news? He’s indeed close to her but what about Shiren? These are all questions that the book tries to answer and mostly gets there, although quite a few plot points end up side-lined and unresolved. I’m hoping that these will return in the next book rather than be completely swept under the rug, but we shall have to wait and see.

While I appreciate that we’re getting to see more of Alfoncina, it’s a shame that this comes at the expense of Shiren who didn’t get a lot of focus in the previous entry either. With only two books left in the series, there isn’t a lot of time left to give her the spotlight, so I can only hope she’s more involved in Volume 6. Author Kisetsu Morita is putting so much effort into exploring the other characters and the world-building that it would be a real shame if the conclusion is let down by Shiren being put aside.

You Call That Service? Volume 5 comes to the West thanks to Yen Press and continues to be translated by Jasmine Bernhardt. The translation reads well with no issues to note. Volume 6 of the series is due to release in June.

Overall, Volume 5 of You Call That Service? offers another fun read but by side-lining its main heroine again, I have some concerns about the future. With the major plot points of this volume going unresolved, there’s certainly plenty of reason to be worried about the trajectory of the story, but that won’t stop you from enjoying this book if you’ve stuck with the series so far. 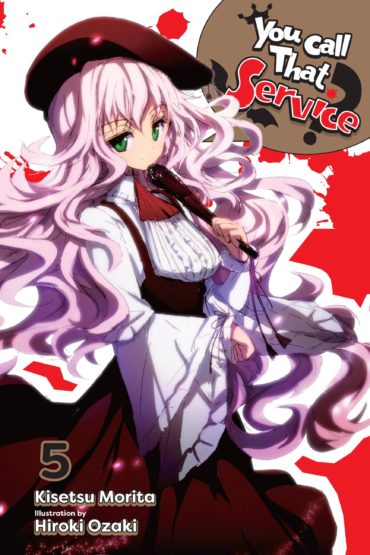 Title
You Call That Service? Volume 5