As enjoyable as Volume 5 of You Call That Service? was, it left me with some concerns for the future as our heroine Shiren found herself sitting on the sidelines yet again. But now with the arrival of Volume 6, it looks like things are about to change in a big way as the series approaches its conclusion.

At the beginning of this book, Shiren receives a letter from her mother, Sairi, who promises to come and whisk her away so the two can spend their life together in Japan. But leaving the Sacred Blood Empire means leaving her sister Ouka and protagonist Ryouta forever because her mother is a wanted criminal within the empire, so she she can’t freely return.

Although Ryouta was originally a Japanese citizen, the curse upon him makes him irresistible to human women, meaning he has no interest in returning to his life in Japan alongside Shiren. Instead, Ouka proclaims that if Shiren leaves, she’ll make Ryouta into her minion and enrol him in the imperial guard.

Shiren initially claims she has no interest in joining her mother, but with no family besides Ouka and missing her mother’s love, Shiren’s resolve begins to waver just enough to cause problems. On top of that, Sairi has taken control of the Virginal Father, an organisation in Japan dead set on bringing down the Sacred Blood Empire. Sairi leads the charge in an attack on the Empire, all to retrieve her daughter. Shiren recognises that if she stays, then those she cares about are going to be at risk, but can she really leave Ryouta behind?

As far as final arcs go (and this is indeed an arc as it’s split across this volume and Volume 7), this is a solid idea. Shiren’s mother, and the fact that she’s a fugitive for the crime of having killed the former Emperor, is something that hasn’t been touched on since the very early books. I would have been fine with her not being brought into the story at all at this point, but I think it’s for the best that we are tying off that loose end. It does also give purpose to the Virginal Father group, who have mostly been regulated to operate in the background with little rhyme or reason for existing.

This has also forced Ryouta and Shiren to face up to the budding romantic feelings they have for one another, as well as their muddled relationship with Ouka. Ryouta and Ouka were in love as kids; are they still in love now? That’s something they have to finally work out, away from the pressures and interference of the other girls who have an interest in Ryouta.

Whatever happens now, I’m just happy to see author Kisetsu Morita fulfil my desire to focus on Shiren and I’m sure the series will reach a satisfying conclusion. We’ve had a difficult road to get to where we are, but I think if you’ve managed to stick around for this long, then you’ll be happy with where it’s going.

You Call That Service? Volume 6 comes to the West thanks to Yen Press and continues to be translated by Jasmine Bernhardt. The translation reads well with no issues to note. The final volume is currently scheduled for release on the 21st of February 2023, meaning we once again have quite a gap between releases.

Overall, You Call That Service? Volume 6 embarks on the final arc and puts Shiren in the spotlight at last. With difficult decisions up ahead which will change everyone’s lives forever, fans will be eager to see where the story is going. 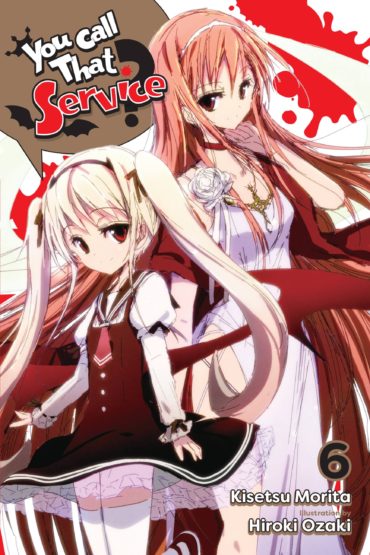 Title
You Call That Service? Volume 6