After a year’s gap since the last volume of the light novel series, You Call That Service? Yen Press has finally brought the third instalment to the West. It’s time to find out what new chaos Ryouta and Shiren find themselves in now!

In the world of You Call That Service? autumn is in full swing and the residents of Akinomiya are looking forward to the upcoming Autumn Festival, none more so than Shiren and classmate Tamaki, who are eager to show Ryouta how they look in yukata and to spend the day with him.

Of course in true rom-com style, nothing goes to plan! Tamaki is cursed by bad luck and when her family’s convenience store is robbed, she’s forced to give up her savings to help make ends meet. This leaves her unable to purchase the yukata she dreams of – but perhaps not all is lost…

As it happens, another of Ryouta’s classmates, Alfoncina archbishop of the Holy Church of the Sacred Blood, was present when Tamaki’s store was robbed and now has an idea as to how Tamaki can earn some of her money back. To help, Alfoncina offers Tamaki a job at the festival and to make things even better, Ryouta also agrees to help out. Not only will this generate enough money for the yukata, but it also gives Tamaki the chance to grow closer to Ryouta without Shiren’s interference.

Coming in at only 165 pages, this volume of You Call That Service? is a light and quick read. With most of the characters besides Ryouta and Tamaki banished to only be seen for a few pages, combined with a not overly complex plot, this book has the breathing room to have some fun.

Not having Shiren and her sister present to fight over Ryouta solves many of the problems I was having with Volume 2 previously, too. This series has quite a large cast of characters already and it can be fun to watch them interact, but I think the story is at its best when Ryouta is interacting with them one-on-one. That’s what made me such a fan of Volume 1 and why I came away having enjoyed Volume 3 so much as well.

The storyline for this book may be quite generic in the romantic comedy genre, but having a festival in a town full of vampires certainly puts enough of a spin on it to prevent it from becoming stale. The only real downside is the fact that Tamaki has quite a gloomy personality and depending on how much you get on with that, there is always the possibility that having the main plot focus on her will wear thin quite quickly. Although again the fact the volume is so short works in its favour there.

If nothing else, it was nice to see Ryouta acting on his own away from Shiren. Up until now, the two have been largely inseparable (which makes sense, given the master and servant relationship), but Ryouta is far from helpless and should be able to do things alone. Obviously, Shiren is sad that Ryouta is busy on the day of the festival, but since she’s close friends with Tamaki, that tempers her reaction.

Hopefully having seen that Ryouta was okay without her means Shiren will give him more freedom, but perhaps, more importantly, we might get to see Shiren getting embroiled in adventures all of her own without her servant around to help. I would definitely be interested in seeing more books like this where we have more focus on individual members of the cast in the future.

As previously mentioned, You Call That Service? Volume 3 comes to the West thanks to Yen Press and has been translated by Jasmine Bernhardt. The translation reads well with no issues to note. Volume 4 of the series is scheduled for an English release in August, so we won’t be waiting too long to see what’s next for the cast.

Overall, You Call That Service? Volume 3 proves to be a return to form for the series. Despite a short page count, the book manages to include a bit of everything I like about the characters. This one capitalises on the fun factor and that pays off well for it. 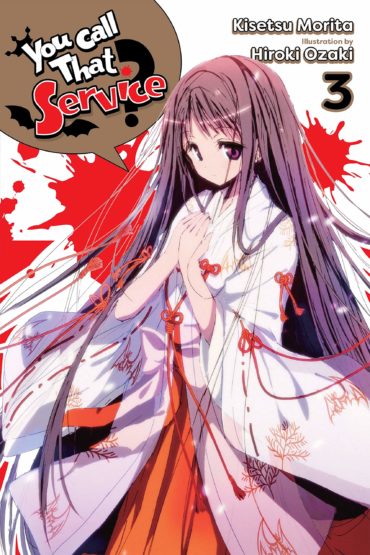 Title
You Call That Service? Volume 3