‘Sensei. I was such a child in those days. I didn’t understand what you meant. I only ever thought about myself. I took the easiest paths…’

Growing up in laid-back Miyazaki, young Akiko Hayashi has a dream: to be a shojo manga artist. Except, given the easy-going kind of girl she is, she doesn’t have the first clue as to how to go about achieving her dream. Apply to art college, maybe? When Futami, an ultra-cool fellow high school student tells her that she’s attending drawing classes outside of school, Akiko wanders along too – and finds herself at the mercy of a tyrant artist/teacher, Hidaka-sensei, who, armed with a shinai (bamboo kendo sword), terrorizes his students (of all ages), forcing them to draw the same objects again and again to achieve perfection. Many times, Akiko tries to wheedle her way out of the classes – but Hidaka-sensei drags her back. If she wants to be in with any kind of chance of becoming a mangaka – not that she’d ever dare to tell anyone, especially Hidaka-sensei – she’s going to have to work hard (blood, sweat and tears!) to improve her skills. 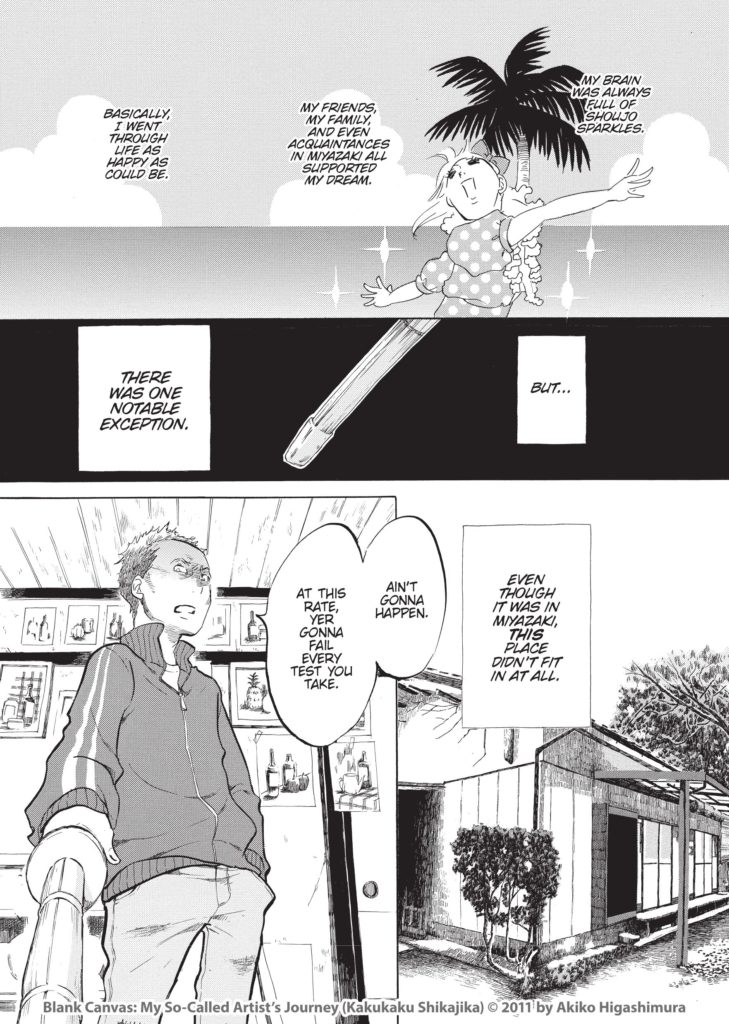 As the narrative progresses, Akiko – and the readers – come to know and understand Hidaka-sensei better. But as Akiko prepares for the entrance examinations at the end of Volume 1, it looks as if  Futami will waltz effortlessly through the various tests, while Akiko will have to struggle to achieve anything at all, the result, of course, of messing about too much instead of studying… After hoping to get into art college in Tokyo – the inevitable happens. Left with only one option, far-distant Kanazawa, Akiko must work harder than ever before if she’s to stand a chance of winning a place.

Snowy Kanazawa is a real shock to Akiko. Used to the balmy climate of Kyushu, she has to buy herself a whole new winter wardrobe! But as she settles into the first year of her four-year course at college, a terrible creative paralysis sets in. ‘It was truly the perfect environment for creating art. And yet, as soon as I started college… I suddenly stopped creating art. Or maybe I should say that I couldn’t make art anymore.’ 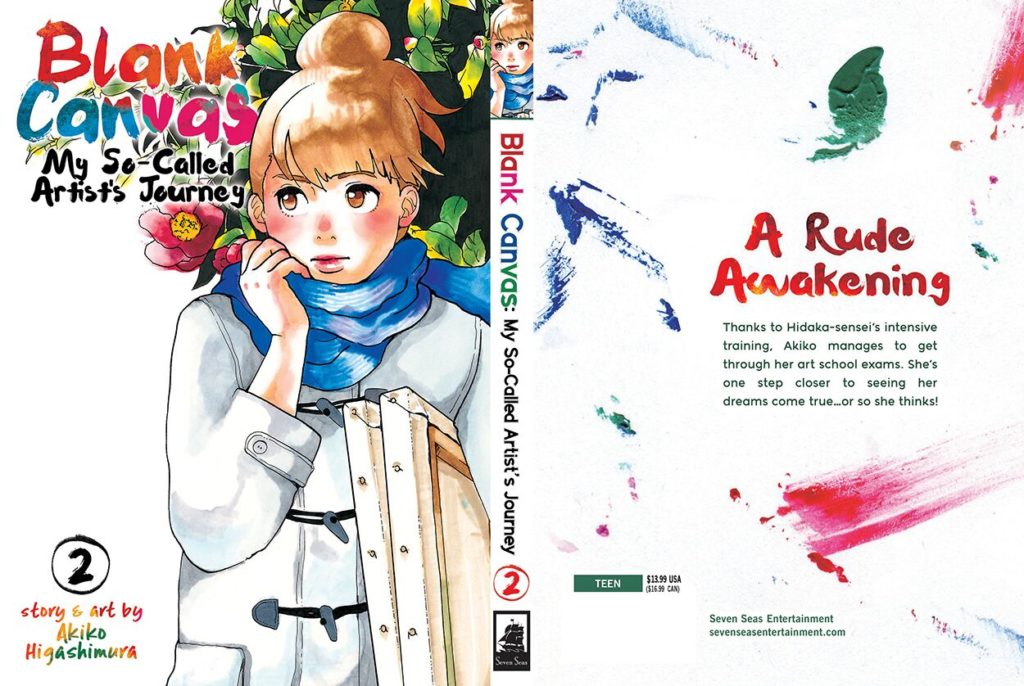 These feelings will ring true for many who have gone on to study their favourite arts subject at university or college, only to find that their drive to be creative shrivels and dries up under the spotlight of so much assessment and criticism (even the positive kind). Again, Hidaka-sensei comes to the rescue with his rigorous training methods (tough love, the reader sees but Akiko is oblivious).

By Volume 3, the harsh realities of life after college loom large. Back home in Miyazaki, Akiko must get a job – any job – which is how she ends up working in a call centre during the week and spending the rest of her time drawing at Hidaka-sensei’s studio. She evens discovers that she has a gift for teaching as she begins to help his other students. (All this life experience must have provided a good grounding for depicting the range of vibrant characters that have peopled her manga, even if she didn’t settle that easily into the working life of the call centre!) ‘I just used my misery as fuel to draw like a maniac.’ And so Akiko puts her first story in the mail to Bouquet (her favourite manga magazine) Could it be that, after so long, the urge to create manga – and have it published – is about to bear fruit?

‘Fine Art is exhausting… But manga is different. The world of manga is much more carefree. As long as you have paper and a pen, you can draw it anytime.’ 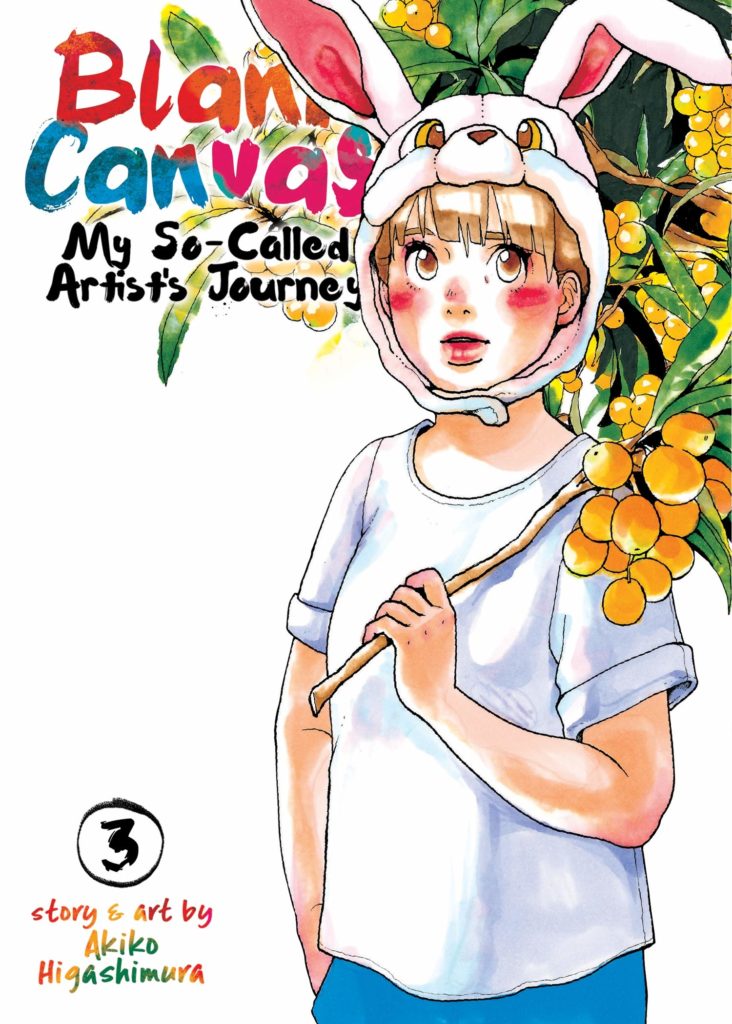 If you’ve read any of Akiko Higashima’s other manga (Princess Jellyfish, Tokyo Tarareba Girls) you’ll know that she has a wickedly accurate gift for skewering her characters’ human frailties, combined with a genuine sympathy for their innermost desires that make them behave in the ways that they do. This ability is what makes her manga such a compelling read; the people she portrays are believable, warts and all – combined, of course with a distinctive graphic style very much her own and a dry sense of humour.  So what happens when she turns her creative spotlight on her own past in Blank Canvas, making herself the central viewpoint character, and following young Akiko’s obstacle-strewn path from high school to mangaka? She’s merciless in looking back at her younger self – which makes for an  unputdownable narrative where self-deprecating humour mingles with perceptive insights into why she behaved as she did at the time. Above all, it’s the relationship between Akiko and Hidaka-sensei that dominates the first three volumes of this five-volume series. Throughout these first three volumes (of five) the older, wiser Higashimura is very clever at showing us what she was unable to appreciate as a happy-go-lucky teenager: Hidaka-sensei must have known he was dealing with a gifted student with a lot of potential, even if he thought (and she didn’t go out of her way to convince him otherwise) that she was aiming to become a ‘proper’ artist.

If you’ve ever dreamed of becoming a mangaka (or an artist or a writer), you’ll find Blank Canvas utterly compelling. But even if you’re just looking for a slice-of-life memoir of growing up, trying to achieve your dreams – and life not always going the way you’d hoped or planned, you’ll still enjoy this. There are moments when you want to reach into the panels and give the young Akiko a good shake (as she obviously does too, looking back at her younger self) – but these are interspersed with genuinely funny episodes. Yet as the chapters go by, it becomes more and more apparent that this work is as much a heartfelt tribute to Hidaka-sensei, the mangaka’s stern teacher – and the relationship that evolved between the two of them over the years. Much of the grown-up mangaka’s reflection/memoir is freighted with regret: some comical, some agonizingly heartfelt as she berates herself for being so blind and insensitive at the time (for just being young, really, and this is surely something almost anyone who’s over the age of twenty can relate to). So, as the chapters of her life unfold (with the occasional snapshot inserted of her life ‘now’ with her little son and her successful career) Blank Canvas reveals itself to be as much about Hidaka-sensei as Akiko Higashimura and her debt to him and the impact he had on her life and development as an artist.

Blank Canvas makes another excellent addition to Seven Seas’ fine and varied selection of titles. The translation is by Jenny McKeon and fluently captures the mangaka’s tone of voice and lively character; after reading this, you come away feeling as if you’ve been reminiscing with a friend.

Volume 4 has just been released and the final volume (with Hidaka-sensei on the front cover) is due later on this year from Seven Seas. 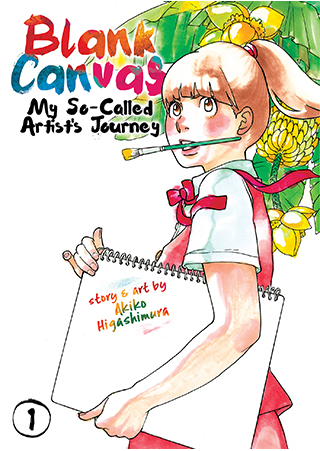 Yokai Rental Shop is an engaging supernatural manga series that delivers just the right kind of delicious thrill to be relished on long, dark winter evenings.