The story follows Alice Amakawa, whose family disappeared six years ago, leaving her to take care of the family home. As well as guarding her home and waiting for her family’s return, Alice is also tasked with fighting off wild ‘Cosmofs’ – mysterious alien creatures left behind by her mother that went mad in her absence. 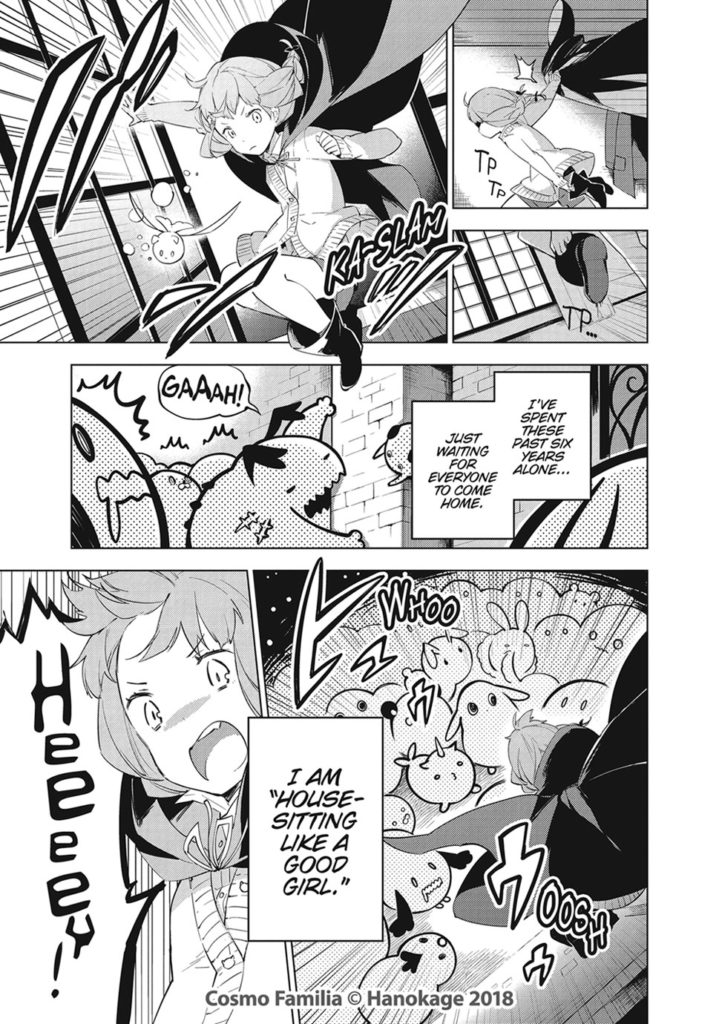 While the Cosmofs don’t appear to be killing humans, they are destructive and will eat and destroy homes. Before Alice’s family disappeared, a few Cosmofs lived in the family home as pets, but since then a mass invasion seems to have happened. Now the town’s residents near Alice’s home blame her mother, Raika, and by extension Alice for the Cosmofs ruining the world.

Now that six years have passed, Alice is celebrating her sixteenth birthday and beginning to wonder if she should give up on her hopes of her family returning. The townsfolk don’t trust her, the Cosmofs do nothing but cause trouble (and are immortal, so even though she fights them, she can’t defeat them!), and she’s surviving on bread for her meals.

Nevertheless, she continues protecting her home, that is until a member of the Intergalactic Police Force arrives, hoping to recruit Alice to fight off the Cosmofs for good. This sets off a chain of events that will lead Alice on a journey that will shed light on both the Cosmofs and her family’s fate. 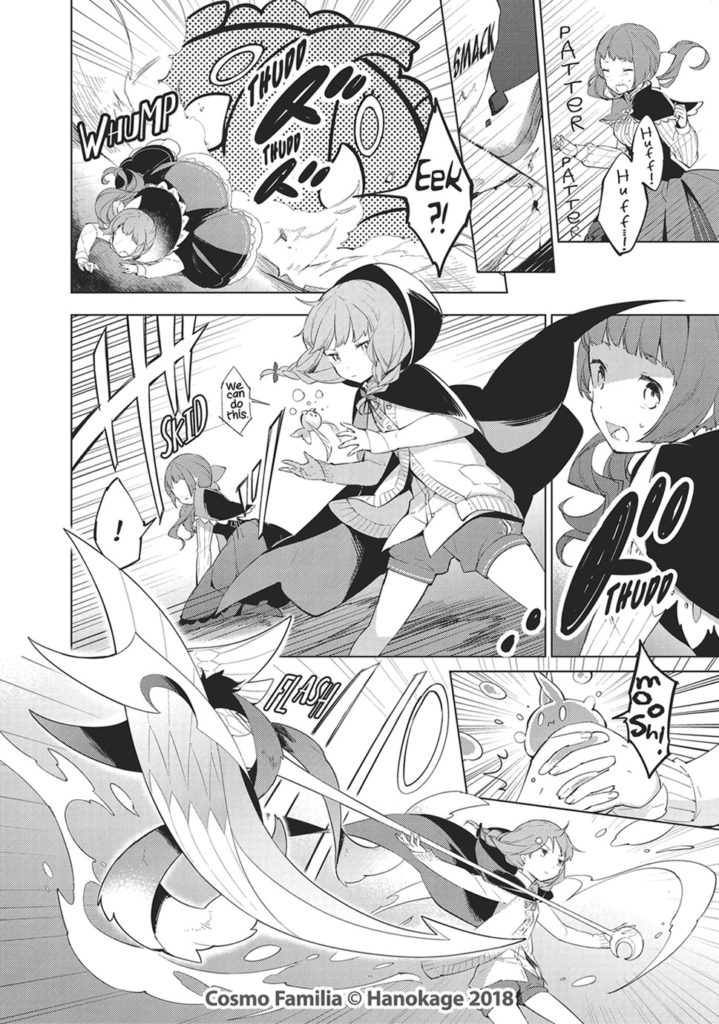 It has to be said that as entertaining as Volume 1 of Cosmo Familia is, it’s all over the place in terms of its story. It’s not until Chapter 2 that we learn the Cosmofs aren’t harming any living creatures and that Alice can’t defeat them (nor wants to, since they’re part of her family). There are a lot of unanswered questions that pile up as we continue, too, which takes away from the narrative.

For reasons that are never explained, Alice can transform into a magical girl thanks to her pet (or secretly one of the Cosmofs?) Papii who gives her the ability to defend against the Cosmofs’ attacks on her house. Also unexplained is how the Cosmofs came to exist in her world to begin with, which seems like a fairly big part of the story to leave unexplored!

Later on in Volume 1 Alice finds herself in what appears to be either a parallel universe or simply sent back in time (or both!), which also goes woefully unexplained. It feels like the author was trying to cram in as many different elements as possible to see what would stick and this doesn’t make for a great reading experience.

Outside of working on the Madoka Magica series, this appears to be mangaka Hanokage’s first original work. This makes sense, since a lot of the issues I have with the manga are things a more experienced creator would probably have managed to smooth out. Cosmo Familia is by no means a bad manga, it’s just unpolished and a bit too ambitious. 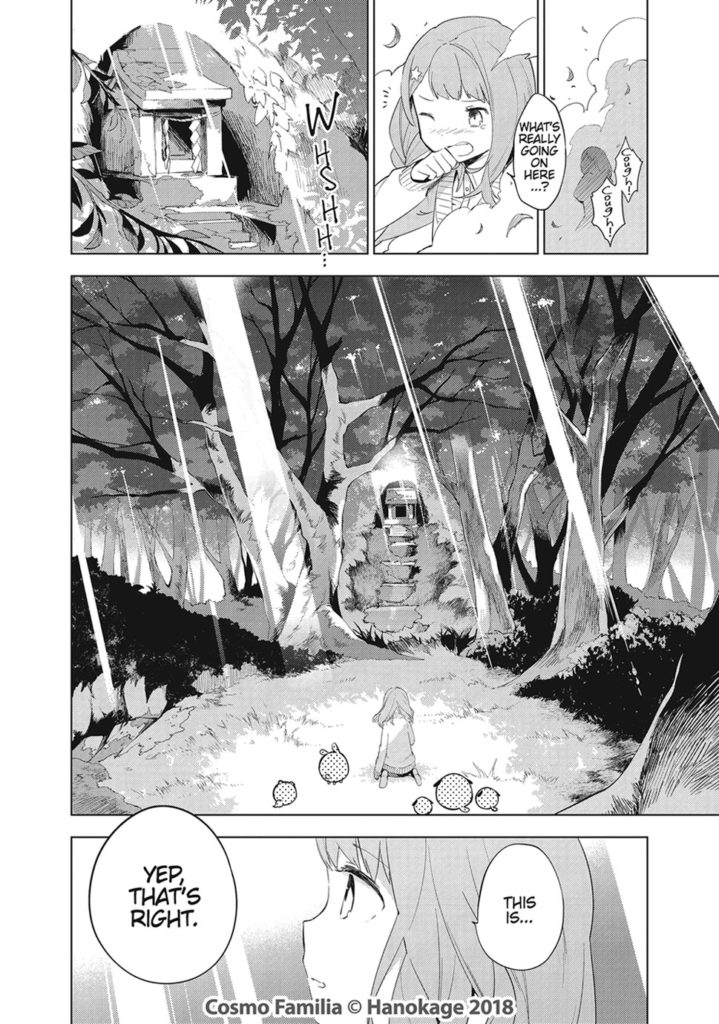 Where the artwork is concerned Hanokage has captured the cute style that magical girl series often opt for. Character designs are clean and recognisable, while the Cosmofs look similar to a lot of animals we know and love (dogs, cats, elephants…). My only criticism is that the Cosmofs are often thickly outlined and then filled with screentone rather than having any detail to them. This choice does add to their cute appearance but can seem lazy in the more dramatic scenes where I wish they were drawn differently.

Cosmo Familia Volume 1 comes to the West thanks to Seven Seas and has been translated by Beni Axia Conrad. The translation reads well but I found it a bit strange that the series ordered the names in the traditional Japanese way (last name then first name) instead of how we do in English, especially when the series is a fantasy and not obviously set in Japan.

The translation also tended to add the ‘sama’ suffix in some dialogue, but not use ‘chan’, ‘senpai’ or the like the rest of the time (even in instances where the characters are familiar enough to ignore the suffix). Like the series itself, the translation feels a bit disjointed, which is a shame as it’s perfectly fine otherwise.

Overall, Cosmo Familia Volume 1 is an entertaining but unpolished introduction to a new magical girl series. The manga spends too much time jumping from one idea to the next without any real rhyme or reason and that will put most readers off. 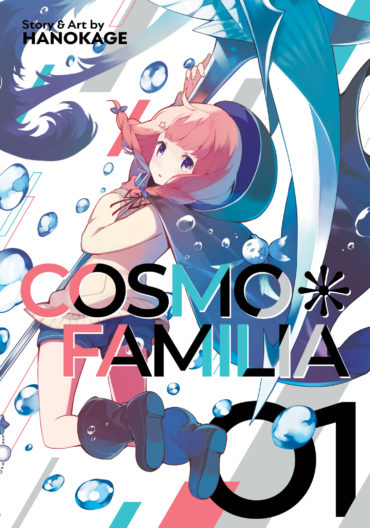