If you’re a fan of the Pokémon franchise then you’ll no doubt have come across the Pokémon Adventures manga at some point. The series has so far been running in Japan for 53 volumes and VIZ Media have been releasing the manga in English since 2009. Today I’m here to review Volume 1 of a special collector’s edition, which includes the first three volumes of Pokémon Adventures. Is it a worthwhile release? Let’s find out!

Our story follows the adventures of Pokémon Trainer Red, who is inspired by a meeting with soon-to-be rival Blue to set out on a journey. Red dreams of becoming a Pokémon Master, someone strong enough to defeat Blue and be the best of the best.

Red sets off from Pallet Town with a Pokédex in hand from Professor Oak and a Poliwhirl and Bulbasaur by his side but, unbeknown to our hero, evil gangTeam Rocket is up to no good in the shadows. As Red journeys around the Kanto region he’ll have many a run-in with the evildoers but will he and his Pokémon be able to overcome and accomplish his dream?

The plot of Pokémon Adventures might be a simple one but it’s a lot of fun. Rather than following the original video games or the popular anime series, Pokémon Adventures only loosely adapts the usual Pokémon tropes and instead leans into darker storylines that the franchise wouldn’t normally explore.

Team Rocket are hunting down the legendary Pokémon Mew to help finish off their creation of Mewtwo. On top of that, they experiment on Pokémon all the time (Red eventually adds a couple of these to his party) and aren’t averse to simply killing those they no longer have a use for. Death of Pokémon is simply not a concept the franchise tackles all that often, so it’s interesting to see it’s so commonplace in this manga.

Another interesting aspect of the manga is that some of the Gym Leaders (powerful Pokémon Trainers are usually known for being upstanding citizens) are working with Team Rocket. This leaves Red with very few people to rely on and strengthens his bonds with his Pokémon, while he’s also working twice as hard to restore peace to the towns that have evil Gym Leaders.

This series has been created by mangaka Hidenori Kusaka (handling the story) and Mato (responsible for the artwork). It does take some getting used to Mato’s art if you’re not already familiar with it as a lot of the Pokémon look quite different from their modern-day designs.

On the whole, the manga has a bit of a chibi look to it and this works well for the comedic moments in the story and the small panels the mangaka tends to use. Mato has a good eye for how to convey action scenes and they’re exciting to read, which is important for a series like this.

This collection of three volumes follows Red’s adventure from beginning to end, which makes it a great starting point for new readers getting into the series for the first time. However, if you already own VIZ’s previous release of Pokémon Adventures then there isn’t a compelling reason to replace them and buy these instead.

Unlike VIZ’s on-going rerelease of Fullmetal Alchemist, Pokémon Adventures hasn’t been given a new translation. This means the issues of the original release are still present here, the biggest of these being the fact that Red nicknames all of his Pokémon (as we can see in character profiles at the back of the book) but the dialogue doesn’t reflect this until later in the series.

As previously mentioned, this release comes to the West thanks to VIZ Media and has been translated by Kaori Inoue. Apart from the issues mentioned earlier, the translation reads well, even if it’s a little stiff in places. This release includes some colour pages at the beginning, but this is all artwork used for the single volume editions that we’ve seen before.

Overall, Pokémon Adventures Collector’s Edition Volume 1 is a worthwhile starting point for newcomers to the series. However, if you already own the series in any other form, then there isn’t much point picking it up. That said, even ten years after its initial English release, Pokémon Adventures is still a fantastic manga that fans of this popular franchise will fall in love with. 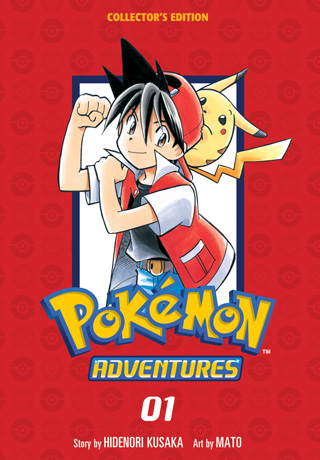