Publisher One Peace Books is perhaps best known for bringing the popular Rise of the Shield Hero series to the West. Today I’m here to check out a new isekai title of theirs: The New Gate. Is it the fantasy adventure we’ve all been waiting for? Let’s find out!

The story begins with the protagonist Shin defeating the final boss of The New Gate video game, a game which has trapped its players and forced them to complete the game or die trying. With the final boss down for the count, Shin waits for his friends and remaining players to log out of the game before he does. Once everyone is free, Shin goes to push log-out but instead of leaving the game, he finds himself transported to a new world – one just like the game!

Shin has been brought into the world of The New Gate, but he appears to be in the world 500 years after the events of the game. Being one of the most powerful players in the video game, Shin is relieved to find that his stats and abilities are the same in this world, making him more than powerful enough to survive any dangers he may face.

This would usually be around the time when an isekai protagonist would set out to find a way home (especially if they’d been trapped in a game for however many years beforehand!) but Shin seems to be in no rush. He first sets out in search of a familiar store he frequented in the game and comes face-to-face with the owner, elf girl Tiera.

Tiera is happy to tell Shin what he wants to know about the world, especially when he offers her a legendary coin (which was simply the lowest amount of currency from the game world). On top of that, Shin uses one of his skills to break a curse on Tiera and in return, she gives him a letter of introduction. With this in hand, Shin can now skip the queue to get into the nearest town and register himself as an adventurer!

The majority of this first volume of The New Game is spent setting up the world and characters, but this does very little to draw in the reader. I was far more interested in the video game world of The New Gate and how Shin and others got trapped in it than I was in this new world he ultimately ends up in.

The New Gate is based on an ongoing light novel series (so far unlicensed in English) and that means the manga is only a part of Volume 1 so far. For a light novel, this amount of worldbuilding would be easier to sit through, because you’d have something more meaty towards the end. However, in the manga, it’s just boring.

Perhaps part of the problem lies with Shin, who is laid-back and has no interest in returning home. Surely he must have family and friends to return to, but this is never once mentioned. As a character Shin is bland, he’s over-powered and faces no real challenges in this first volume. He doesn’t have a real goal in mind, so there is very little for the reader to be drawn to. Although we meet quite a few other characters throughout this first entry, none of them are all that interesting either.

The New Gate has been adapted into a manga by mangaka Yoshiyuki Miwa, who has a couple of multi-volume manga to their name but nothing else available in English. The artwork is bland on the whole,  with little-to-no backgrounds the majority of the time and little to capture the imagination. Character designs are okay, they’re nothing to complain about but not especially memorable either. The one thing the series does have going for it is that monster designs are very detailed and give off a suitably sinister vibe.

The New Game comes to the West thanks to One Peace Books. While the translator of the book goes unnamed, the translation itself reads well with no errors to speak of. The New Gate manga is on-going in Japan at 8 volumes and Volume 2 is currently scheduled for release in English on May 26th.

Overall, It’s really difficult to find one compelling reason to check out The New Gate. Nothing it presents is a new idea and none of what it offers is done particularly well, especially for a genre as crowded as this one is. While it seems to be a popular series in Japan, this first volume does nothing to convince me that it’s a worthwhile read, and I’d encourage others to pass on it – at least for now. 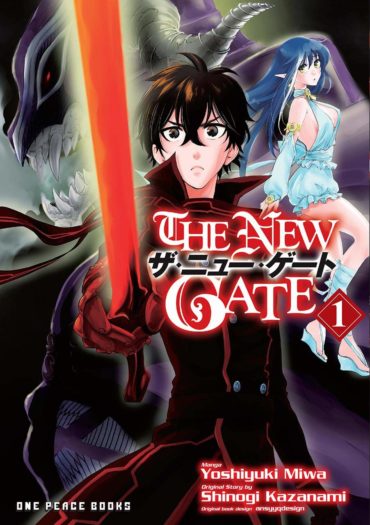