Manga publisher One Peace Books is back with the new isekai series Multi-Mind Mayhem: Isekai Tensei Soudouki Volume 1. But does the story offer an entertaining read in this overcrowded genre? Let’s find out!

Our story follows Bard Cornelius, the son of a nobleman in the empire of Mauricia. The unusual thing about Bard is that his body also houses the souls of Oka Sanai Sadatoshi a samurai from the Sengoku period, and Masaharu Oka, a high school boy who died while debating if dog or cat ears are better.

While Bard’s parents were worried about him having three different personalities, in reality having Sadatoshi and Oka within him doesn’t seem to trouble  Bard too much. He has a love of money thanks to Sadatoshi and an attraction to anime people because of Oka, but otherwise, he’s managed to live his childhood relatively untroubled.

In fact, instead of being hindered, Bard has gained a lot from having these two other souls beside him. Using knowledge of Japan, Bard has created alternative ways to make sugar and gold ornaments which he now spends his days selling for a pretty penny. In fact, he’s the envy of many of the merchants around him and has to be careful to keep all his methods a closely guarded secret…

Helping Bard is Selina, a beastman who runs a trading company and Seillune a maid from Bard’s household. Since Bard is still quite young, the two help him in developing his business and making sure no one (like his parents for example) interfere in his work.

When it comes to Bard and his money-making schemes, this series reminds me somewhat of Ascendance of a Bookworm but with a far flatter protagonist. The problem is that while we know Bard has these three personalities we never truly get to see that in action (although Sadatoshi does inhabit his body for a short period right at the end of Volume 1). The concept is very underdeveloped to the point where I don’t know if Bard can even talk to Sadatoshi and Oka at all or how he got knowledge from Japan for his inventions (does he have access to the memories of the other two or did they tell him about things?).

I wonder if this problem is caused by the transition from being a light novel series (by Ryousen Takami) to being adapted into manga. In similar cases, this usually sees quite a lot of inner monologues cut out and if that’s true in this case also, then that very well might explain why the idea of the multi-personalities is underutilised.

The bigger problem here is that with the multiple personalities more or less sidelined, the series doesn’t have a lot going for it. The story is made up of so many of the common isekai tropes, that there is nothing original to grab onto. This is not helped by Bard having no relatable traits nor do the other members of the cast have much going for them either, beyond spending their time falling all over Bard.

Where artwork is concerned, this is handled by Honoji and it’s not bad by any stretch, but it’s nothing special either. The style is quite sketchy as if it’s all drawn in pencil with minimal inking (minus the character designs), which means there isn’t a great deal of detail. Characters themselves don’t have a big range of emotion and it’s sometimes hard to work out what they’re thinking or feeling because of that. The action scenes are the best the art has to offer, but even then the panels don’t flow very well, so it’s difficult to lose yourself in the moment.

As previously mentioned, Multi-Mind Mayhem: Isekai Tensei Soudouki comes to the West thanks to One Peace Books with localisation by Matt Schley. The translation itself reads fine with no problems to note. Although I must admit I’m not keen on the fact One Peace decided to keep the romaji of the Japanese title in the English name, I suppose it’s to help fight piracy of the manga and raise awareness of the license but it certainly bloats the English title.

The series is ongoing in Japan at eight volumes and One Peace have Volume 2 scheduled for release in January. The series is also available on the new Alpha Manga app which launched recently if you want to try it out. The original light novel the series is based on is so far unlicensed, but being an isekai, I wouldn’t be surprised if that changed sooner or later.

Overall, Multi-Mind Mayhem: Isekai Tensei Soudouki has an interesting premise but wastes all its potential by not exploring it. Everything else the series has on offer is very generic in a market that’s swamped with far more interesting other world adventures. 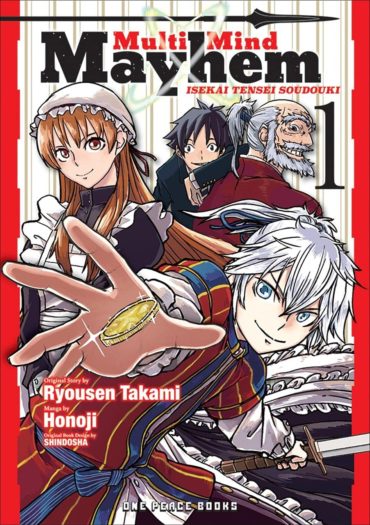