Volume 2 of I Belong to the Baddest Girl at School introduced us to Toramaru’s younger brother Tasuku, who gave her some advice about how to get closer to Unoki. Unbeknownst to Toramaru, these advances worked in her favour and even though Unoki has accepted he has feelings for her, that brings its own trouble! So, with Volume 3 in hand, we watch over these two lovebirds as they navigate the increasing complexities of their relationship.

Now that Unoki has realised he has feelings for Toramaru, he should be happy, but instead, he’s worried about what she’ll do to him, should she find out. So he tries to keep a distance from her in case she catches on, which of course does nothing but make Toramaru sad. With summer break coming up, she was already upset at the prospect of not seeing Unoki for several weeks, so having him keep her at arm’s length is only making it all the worse.

So it’s Tasuku to the rescue once more as he gives Toramaru the idea of inviting Unoki on an overnight trip to their parents’ house, which is currently empty. Naturally, Toramaru doesn’t give Unoki much of a say in the matter and he gets dragged along on her whim, but maybe some time alone together will allow him to work through his feelings productively?

Elsewhere in this volume, Unoki stumbles upon a lost phone which has a photo of Matsuri set as the background. Eventually, it comes to light that the phone belongs to Yutaka and she opens up to Unoki about the fact she has feelings for Matsuri. Yutaka knows her feelings are one-sided, but she’s had this crush since middle school and hasn’t been able to move on. The closer the two become as friends, the harder it is for Yutaka, and Unoki promises to be there for her if she needs someone to talk to about it.

After Yutaka and Matsuri were largely put aside in Volume 2, I’m happy to see them return with a storyline of their own. Because they’re given some development this time around, they’ve become much better supports for Unoki and Toramaru, without upsetting the structure of the story. It’s also easy to get invested in their romance and I find myself rooting for Yutaka just as much as the main couple.

What I’m less happy about this time around is that Unoki and Toramaru’s relationship feels like it has regressed to how it was in the beginning. When we first met these characters, Unoki was fearful of Toramaru and used to try to do anything and everything to please her. Now because he’s so scared of her finding out about his feelings for her, he once again keeps his distance, rather than acting as an equal in their relationship. In the end, just like in Volume 1, Toramaru gets frustrated and ends up dragging Unoki around by the collar of his shirt to prevent him from running off.

When I Belong to the Baddest Girl at School is at its best, the series is highly entertaining, but this back-and-forth between the main couple is already starting to drag just three volumes in. I really hope it gets past this soon or the story is quickly going to grow stale with no way to recover. Even this volume largely gets away with it because of the chapters that are focused on Yutaka instead. The next book looks set to introduce a new character into the mix, so that may also help things.

I Belong to the Baddest Girl at School Volume 3 comes to the West thanks to One Peace Books and continues to be translated by Emily Balistrieri. The translation reads well with no problems to note. Volume 4 of the series is currently scheduled for a release in July.

Overall, I Belong to the Baddest Girl at School Volume 3 feels like it’s beginning to spin its wheels with the relationship of the main characters regressing. What will keep you invested this time around is the focus on Yutaka and Matsuri, but outside of that, I’m not sure how much longer the series can go on like this before it simply gets dull. Hopefully, things will pick up a bit in Volume 4! 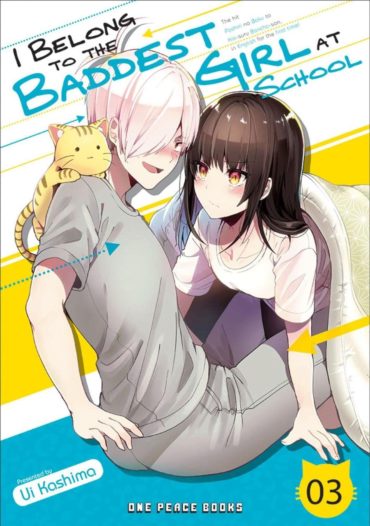 Title
I Belong to the Baddest Girl at School Volume 3