Last summer, One Peace Books began releasing I Belong to the Baddest Girl at School in English and the series proved a fresh entry in the romantic comedy genre. Now it returns for Volume 2 and I’m eager to find out if it remains as entertaining as the initial entry.

To kick things off, we meet Toramaru’s younger brother Tasuku, who has come to collect his sister from Unoki’s place. Because of Tasuku being tall and, frankly, giving off an intimidating aura, Unoki is scared of this new arrival but it’s swiftly revealed to us readers that Tasuku is far gentler than he looks. On the walk home, Tasuku even offers his big sister one of his beloved shoujo manga in a bid to help her romance blossom.

Of course, a big problem here is that Unoki still believes he’s simply Toramaru’s servant and now even her brother has bought into the misunderstanding that Unoki is her boyfriend. But it’s thanks to Tasuku’s involvement that Toramaru finally makes some progress in their relationship! The two almost hold hands and she manages to get the contact information for Unoki; she even gets to go on her very first date with him.

It’s not all romance-focused as there is also a chapter where Toramaru overhears Unoki telling the school rabbits about his troublesome kitten (also called Toramaru) and mistakenly thinks he’s talking about her! Delinquent friends Yutaka and Matsuri make plenty of appearances too, although their contributions this time around are overshadowed by Tasuku and they end up merely comic relief.

In some ways, I was happy to see Yutaka and Matsuri out of the picture since those two feel the most at odds with the setting. They’re also the most likely to put readers off the series since their personalities are… extreme to say the least. I like the whole delinquent angle, but those two often go too far and Toramaru is a way more interesting character when she’s simply a young girl in love with no clue how to navigate the relationship further. Having said that, I hope the author works something out to do with Toramaru’s friends which doesn’t fall back on their delinquent background since they deserve more than to fade into the background.

One positive when it comes to the characters is that Unoki is not proving as dense a protagonist as I worried he might be. As this volume goes on, he becomes more open to the idea that Toramaru might hold feelings for him that aren’t just her being his master and perhaps he’s also ready to admit to himself that he’s in love with her. This is significant progress for a single volume and it makes me excited to see how Unoki and Toramaru develop from here.

I will say that, as of Volume 2, it feels like the novelty of the premise is starting to wear off a little bit, so I’m glad that instead of doubling down on it, author Ui Kashima has decided to move things along instead. The introduction of Tasuku goes a long way to preventing the jokes from feeling too repetitive and it’s easier to get on board with his love for romance stories than it was with some of the delinquent antics of Toramaru’s friends. I do worry about what will happen in Volume 3 when the freshness of Tasuku also wears thin, but we’ll wait and see what happens there.

As previously mentioned, I Belong to the Baddest Girl at School Volume 2 comes to the West thanks to One Peace Books and is translated by Emily Balistrieri. The translation remains excellent with no issues to note. Also compared to Volume 1, the lettering is a lot better and I never noticed it being intrusive the way it was in that initial entry, so that’s a big positive! Volume 3 of the series is due for release later this month, so not long to wait for more of the series.

Overall, I Belong to the Baddest Girl at School Volume 2 continues to delight, despite some of the shine beginning to wear off. With the introduction of a new character, the series continues to prove an entertaining read for fans of the genre. 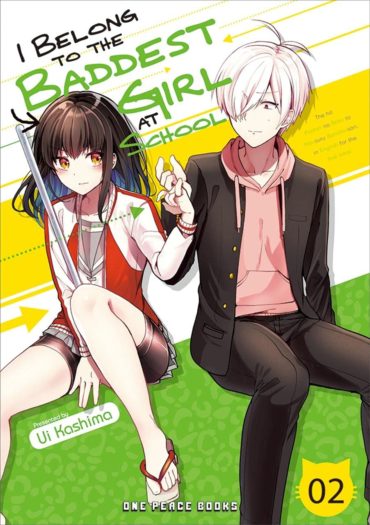 Title
I Belong to the Baddest Girl at School Volume 2