Author Yoru Sumino is best known as the mind behind I Want to Eat Your Pancreas. Thanks to the novel’s success, Seven Seas have begun to bring over more of her novels, starting with At Night, I Become a Monster. Now I’m here to take a look at this new release to see if it has the same charm as Sumino’s bestseller.

The story follows Adachi, a young boy who transforms into a monster at night. It doesn’t matter what Adachi does, he can’t avoid transforming, and once he does, he spends the night exploring the town and sometimes scaring anyone he comes across for fun.

One night Adachi decides to head to his school to retrieve some homework he’s left behind, but despite the late hour, he runs into classmate Yano Satsuki. Our protagonist expects Yano to run away screaming; however, the girl not only doesn’t mind Adachi in his monster form but also recognises him straight away.

During the day Adachi tries to fit in at school and not do anything to get on the bad side of the ‘cool kids’. Yano, on the other hand, is bullied, regarded as little more than dirt by those around her. While Adachi feels sorry for her, he does nothing to intervene, fearing that he’d suffer similar treatment should he be kind to her.

However, at night Adachi starts hanging out with Yano who spends her time at the school enjoying a ‘midnight break’. During this period talk of the daytime is banned and Yano simply asks Adachi questions about being a monster. As he grows closer to Yano will his feelings in the daytime change and help him bring an end to her bullying?

Instead of being a romance like I Want to Eat Your Pancreas, this book firmly situates itself as a supernatural drama. The story is set over a week (although it’s implied Adachi has been becoming a monster for longer), and each day of the week has a chapter for the daytime and night-time events.

While I’d hoped to learn why Adachi was becoming a monster, the novel has no interest in delving into it. This story is simply about our protagonist and Yano: how his experiences with her at night change his perception of her, himself and his classmates. Like I Want to Eat Your Pancreas this is a book that’s impossible to put down until the end.

While I hesitate to call either of the characters likeable, they are easy to sympathise with. The two feel realistic, with thoughts and actions that are suited to young adults in their respective situations (minus the turning into a monster). I was constantly drawn into Adachi’s world and thinking about his story, as well as Yano’s.

The most important thing to remember with this book is that although it has supernatural elements, it’s certainly only using them as a tool to tell the real story here. Some readers will no doubt be disappointed that the novel goes in this direction and I wouldn’t blame them for that.

By the end of the book, it’s clear why Sumino wrote the story the way she has and I think the payoff is worth it, even if it’s not quite what I expected. It’s almost like a NISIOISIN novel, where you’re reading it for that final chapter. To find out how everything comes together in the end. It’s the mark of a great book and leaves me eager to read even more of Sumino’s novels in the future.

At Night, I Become a Monster comes to the West thanks to Seven Seas and has been translated by Diana Taylor. The translation reads well with no issues to speak of. This book is one of Seven Seas’ larger formats, which fits nicely alongside their release of I Want to Eat Your Pancreas.

Overall At Night, I Become a Monster is a fascinating read. It’s a mystical story that doesn’t go where you’d imagine from the synopsis, but it’s just as captivating as Yoru Sumino’s I Want to Eat Your Pancreas. A must-read for fans of the author and supernatural dramas! 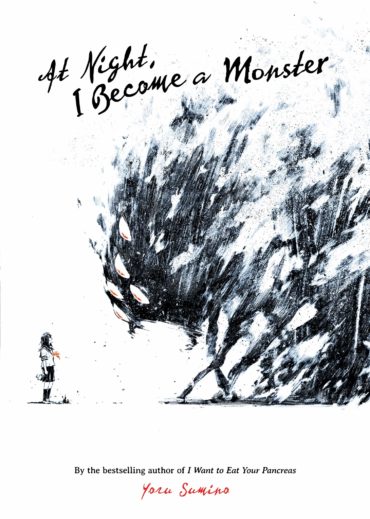 Title
At Night, I Become a Monster