Can’t Fear Your Own World is written by Ryohgo “Baccano!/Durarara!!” Narita and is actually his second series of novels in the Bleach world; his first is Spirits Are Forever With You, which came in two parts but it was never officially released in English. A self-confessed big fan of Bleach, Narita took the opportunity to write this trilogy of novels based on his love of the character Shuhei Hisagi, and a general desire to fill in a lot of the blanks that were left wide open at the end of the manga’s run. With original author Tite Kubo’s blessing, Ryohgo set to work and these novels started appearing in Japan in 2017, with the final of the three volumes appearing in December 2018. So two years later and English versions appear, but are they worth your time? That will depend entirely on whether you’re a hardcore fan of the original series or not…

As one of the primary reasons for these novels existing is to fill in gaps, there is a definite feeling that it is written only for fans of the series. Taking place half a year after the defeat of Yhwach and his Quincy Wandenreich and the assassination (if it was a thing able to be assassinated) of the Soul King, early chapters of this opening novel focus on the Soul Society trying to pick up the pieces, count the dead and repair the countless buildings that were destroyed. New Captain Commander Shunsui Kyoraku sees to the installing of a new Soul King by the Royal Guard before also seeing to previous lead antagonist Aizen’s re-incarceration in the harshest prison in the land, his helping in the defeat of Yhwach not excusing him of trying to do something very similar a few years earlier. It’s here we first re-meet Shuhei, as he’s taunted by Aizen over his relationship with Tosen, which is old news by this point but will come into play later in the novel.

We then get an introduction to the main antagonist: Tokinada Tsunayashiro, someone who has ties to the Four Noble Houses that have been casually mentioned across the series but never fully explored, and someone who is murdering a fair number of them in order to rise to the top. At the moment, there doesn’t seem to be anything more to him, no further layers to his personality than someone who enjoys the act of killing to an unpleasant degree and who is using the chaos to suit his needs. He does have an interesting connection to the series’ past shown early in the novel via flashback, but I’ll leave that out for spoilers’ sake. He is seconded by a creepy child named Hikone, who seems to be oblivious to the fact that killing isn’t a fun game, thanks to his relationship with Tokinada. The duo make for a decent pair of villains, but at the moment do feel like they’re out of a short filler arc or movie where there isn’t enough time to give them much character, so they come off as “evil for the sake of it”, but I’m willing to assume he’ll get more backstory as the novels continue.

There are really only two things to complain about here, but they are quite big. The first is in relation to what I just wrote: every story has a beginning, middle and end, and this is very much just the beginning. It’s an entire light novel of beginning to set things in motion without actually getting into motion, which would be fine if it was the first third of a single novel, but definitely seems odd when read on its own. If you want to read Can’t Fear Your Own World then you’ll probably be best off waiting until all three volumes have been released and reading it as if it were one book.

The second thing is only a problem for the potential sales because this is completely unapproachable for people who aren’t intimately familiar with Bleach’s manga run. The series has a massive cast and the book is more interested in dialogue than descriptive prose, so if you’re not sure who a certain character is or what he/she looks like when you read their name, too bad. Each chapter has an illustration done by Tite Kubo, which is nice, but doesn’t help much if you’re not familiar with the cast. A good example is when the core story gets going, Shuhei Hisagi is interviewing people for his newsletter about the Blood War with the Quincies and so he visits and speaks to both Kukaku Shiba and family, who only made brief cameos after their feature role in the second arc of the series, and the Fullbringers from the unfortunately unpopular arc that happened just before the final one. While hints that we’ll finally get more information about the latter, whose role in the story was presumably dropped due to their lack of popularity, is interesting for this long-time fan, it’s a box that a lot of casual fans won’t even know is there to be ticked.

As mentioned, the prose does rely heavily on conversations, some parts of chapters reading like a script more than a book, but when it does come time to set the scene, the writing is perfectly serviceable, though again some mental imagery might be difficult if you don’t already know the general look of some famous Bleach locales. The translation by Jan Mitsuko Cash is good, not that I have the original text in front of me (nor would I be able to read it!) but it all flows well and the characters descriptions and dialogue sound right, which is obviously a credit to both the translator and Ryohgo. I hope Ms Cash was also a fan of the original works, otherwise I can only imagine the Bleach dictionary she must have been given during the translation process!

Bleach: Can’t Fear Your Own World is an entertaining light read for diehard fans of Bleach who are interested to get those last half-dozen unanswered questions answered, but it is completely unapproachable for anyone else, including fans of the anime given how heavily it references the yet-to-be-animated final arc. So a very niche audience, but if you do fall into that category, then there is fun to be had, though I imagine the majority of the fun is to come in the next two volumes…

Read a free preview on the publisher’s website here. 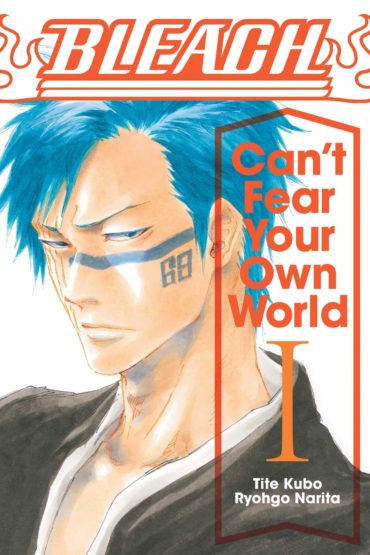 Volume 73 is Bleach’s penultimate book, but as we head towards the big finale, is the series suitably red-hot, or are we just plodding along to the end?

Bleach is continuing its slowly released countdown to the finale in this country with, as the title suggests, Volume 71! Giant sentient hands, energy-created sniper rifles and a long awaited Bankai reveal await inside!