Written by Ryohgo Narita of Baccano! and Durarara!! fame, Can’t Fear Your Own World is advertised as a follow up from Bleach’s final story arc focusing on popular Shinigami lieutenant Shuhei Hisagi, and while the latter part is true in that he does have a lot to do in the story and will clearly get the big climactic fight in Volume 3, it’s less a follow-up from Bleach’s final arc as it is a follow-up from the Fullbringer arc that preceded it, with heavy ties to the backstory of Hisagi’s old Captain, Kaname Tosen.

We left the last book with only a few plot strings, specifically a new villain in Tokinada Tsunayashiro, a man who is of noble birth but, as we find out in the prologue at the front of this very book, has been driven somewhat crazy by diving into his family’s archives and finding out a dirty secret from “the very beginning of Soul Society” that means the whole realm was “built on a lie”. Sounds interesting, but for now he is very much the bloodthirsty crazy antagonist, manipulating a boy named Hikone Ubuginu who has a mysteriously powerful energy that contains traces of Shinigami, Hollow and Quincy. He is told by Tokinada that he is to become the new Soul King, but why and how that could be a thing is still very much in the air.

Hisagi’s role at the moment is doing research into the cause, conclusion and fallout from the Quincy invasion, and after having just interviewed a mysterious medic known as Seinosuke, who seems to have a connection with our lead villain, he comes to Karakura Town to talk to Urahara about his involvement in the war. This is where the book goes a little bit crazy… Okay, a lot crazy. In my review for Volume 1 I said about how if you’re reading this with only casual knowledge of Bleach’s history and characters then you’ll be lost, and I can confirm that Volume 2 has not changed this fact. By the middle of the book Ginjo, the first Substitute Shinigami and the Fullbringer arc’s lead antagonist, and his group of Fullbringers are attacked in Soul Society by previously thought dead Quincy and Arrancar (some of whom we knew had been converted into slaves, some we didn’t), all under the control of Squad 12 Captain and head Scientific Researcher Mayuri. They’re soon joined by actual Arrancar from Hueco Mundo, the realm of the Hollows, meanwhile former Vizard and current Captain Shinji confront Hikone, and Urahara and Hisagi are confronted by some members of a new Xcution cult of Fullbringers in the human realm and are assisted by old Xcution members as well as Vizards that didn’t return to Soul Society.

Shinigami, Arrancars, Vizards, Fullbringers, Quincy, artificial souls, Hollows, Zanpakuto Adachi… all of these groups, terms and more characters that you can shake a stick at all just… converge on two locations and it becomes something of a mess. The new Xcution are led by what I believe to be the final new novel exclusive character in Aura Michibane, a lady with Fullbring powers and, yes, a strong connection to Tokinada Tsunayashiro. Without spoiling too much, things do calm down for a spell, and a lot of these separate factions start to form alliances to make things more simple to follow, but you get the feeling there is a story Ryohgo Narita wants to tell involving the history of Soul Society, Fullbringers and Hisagi’s old mentor’s friend’s killer, but when given unrestrained access to the Bleach canon he decided he wanted to write for all the characters and fill in as many plot holes and open-ended threads as he could get away with, which was apparently all of them. The final chapter of this volume ends with a certain long-awaited Bankai about to finally be shown, which is the sort of thing I wanted to see/read, but we also get information or backstory on character’s like Urahara’s two shop attendants Ururu and Jinta, who haven’t played any kind of role in the story since the start of the Arrancar arc many, many years ago, and the “revelation” of more Quincy survivors than we ever needed (does anyone really want more NaNaNa Najahkoop?… Has anyone ever actually asked that question before?) It’s certainly messy at times, put it that way.

The prose is once again heavy on dialogue, though given Volume 2 is just under double the length of Volume 1 at 516 pages compared to the previous volume’s 276, and combined with the fact that this is, in reality, the middle section of one single book, there is a lot more story to digest. The translation by Jan Mitsuko Cash is once again perfectly fine; I don’t envy their job of having to translate so many odd character and race names across 500 odd pages! Fight scenes are often well told, though some are also just one or two moments before moving on to something else. We still get illustrations from original Bleach author Tite Kubo, though not for every chapter like last time (though we do get two in a row for the previously mentioned final chapter Bankai tease…)

Bleach: Can’t Fear Your Own World Volume 2 continues to tell an interesting tale about a nobleman with access to forbidden knowledge and his belief that Soul Society is better off destroyed because it was “based on a lie”, and those who are trying to stop him. Sadly this interesting tale is so packed full of side characters, cameos and plot-hole-filling side stories that its core storyline is easily lost in the whirlpool of fandom. Am I looking forward to Volume 3? Yes, but then I’ve been a massive Bleach fan for over a decade now and want to see/read certain things that were missed in the final arc, plus I am interested in what this “big secret” is. If you’re not any kind of diehard Bleach fan though, I’d avoid this release. You’d need Bleach Wiki open on a tablet by the book to jog your memory of some of the characters featured and their backstories… 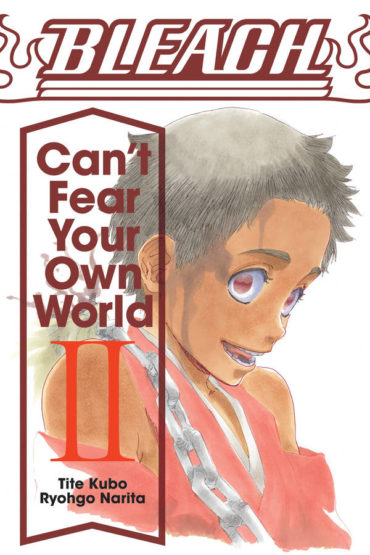 After a reasonably long delay (especially if you wanted the physical version!) the final third of the “Can’t Fear Your Own World” Bleach light novel is here and manages to not only tie up its own story but it also reveals some long-awaited Bleach lore, details and backstory on top…