In the last instalment of Konosuba: An Explosion on this Wonderful World! Megumin and Yunyun finally earned enough money to bid farewell to the City of Arcanletia. Now Volume 4 is here and the duo on their way to the town of Axel, but what new dangers await them?

To reach Axel, Megumin and Yunyun are taking a trip by carriage with some merchants, but for some reason, the travellers keep being attacked by fearsome monsters! The group aren’t too worried since they have two members of the Crimson Magic Clan onboard but as Yunyun quickly finishes off all their foes, Megumin begins to grow jealous of not being able to show off her magic.

Once the girls do reach Axel they’re faced with having to find a party to adventure with and that proves difficult when you have magic as specialised as Megumin’s. However, this is the town of beginners and surely someone is willing to take a chance on this wacky girl?

Megumin’s magic is incredibly powerful, but can only be used once a day. It’s really only useful against large enemies in an open area, which isn’t something most newbie adventurers require. Our hero goes through a few parties, struggling to find anyone willing to take her on long-term.

On the other hand, Yunyun is simply struggling to make friends. She’s had no interest in her advertisement for a party and Megumin’s antics are only making things worse for her. Perhaps the solution would be to team up, but considering the rivalry between the two, it seems like they may need some convincing…

One of the nice things about this volume of Konosuba is that there are a lot more familiar characters popping up here and there. Megumin’s arrival in Axel happens around the same time Kazuma and Aqua are brought into this world (which is the beginning of the main series), so although Megumin isn’t in their party yet, we still see them in the background. There is even a nod to shop owner Wiz who becomes an important character in the main series later on.

This volume is a perfect blend of action and comedy. When our cast was in Arcanletia there weren’t many fight scenes (since there didn’t need to be) but now they have monsters to battle and that leads to some great scenes. Mangaka Kasumi Morino has a good handle on how to emphasise the battles and brings them to life wonderfully. There is a feeling of wonder when you look on to Megumin firing off her explosions, which is so important to the series.

If nothing else, this instalment of the series is sure to put a smile on any Megumin fan’s face. Her unique humour and drive for adventure are perfectly conveyed through the artwork. While I’ve enjoyed every volume so far, I think this is certainly one of the best. It just keeps getting better and better as we get closer to the conclusion in Volume 5.

As always this series is brought to the West thanks to Yen Press and continues to be translated by Kevin Steinbach. The translation reads well with no issues to note. This release also includes some colour pages at the beginning, which are lovely to look at!

Overall, Konosuba: An Explosion on this Wonderful World! continues to be a must-have title for fans of Megumin. With a blend of fun-filled quests and monster hunting, this is the series at its best. The next volume brings a conclusion to the series and if it’s anything like Volume 4, it promises to be wonderfully explosive. 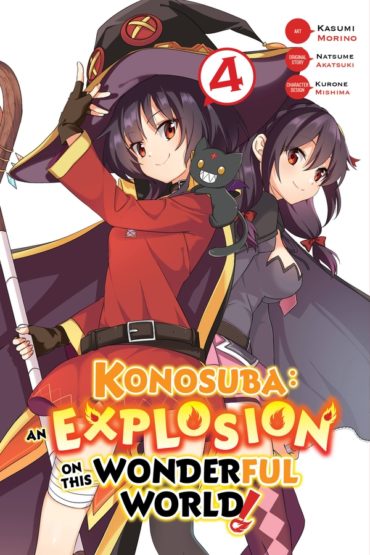 Title
Konosuba: An Explosion on this Wonderful World! Volume 4

Konosuba: An Explosion on this Wonderful World! Volume 5

As Megumin’s story comes to an end in this volume of Konosuba: An Explosion on this Wonderful World! we’re treated to one last battle against a great evil. Friendships will be tested, towns will be threatened and Aqua will go about her day none the wiser as to how desperately our hero could do with her help!