Although our protagonist Megumin has made it to the town of Axel, she’s been having trouble finding an adventurer’s party to work with. Now we’ve reached the final volume of this manga adaptation and it’s time to find out how our hero’s story comes to an end.

Having had no luck finding a party to work with, Megumin reluctantly invites YunYun to go on a quest with her. Unfortunately for our heroes, they’re soon attacked by a devil, who’s after Megumin’s familiar Chomusuke. Now the town of Axel is in grave danger and the guild urges the adventurers to find a beautiful blue-haired priest who is new in town and has the power to defeat the powerful foe.

Readers familiar with the world of Konosuba will instantly recognise the priest the guild is talking about as the goddess Aqua. However, at this point, both she and Kazuma are busy working part-time jobs to make ends meet and so no matter how far the adventurers look, they just can’t find this supposedly impressive priest. (Not least because Aqua does not give off an aura of being anything more than an idiot).

With the inevitable destruction of the town growing closer by the minute, Megumin takes it upon herself to face off against the devil. Being a member of the Crimson Magic Clan and a wielder of the impressive Explosion magic, surely she can overcome this great evil?

This final instalment of Konosuba: An Explosion on this Wonderful World! has a bit of everything. It has comedy, heartfelt emotional moments and impressive battle scenes. It’s what we’ve come to know, love and expect of the series after four volumes spent with it.

That said, I find the artwork in this volume isn’t as good as Volume 4. It’s not that there are any big issues with it, it’s simply that I feel the battles in the previous volume were more impressive. Megumin’s big explosion at the end of Volume 5 just doesn’t have the same oomph as last time, which is a shame.

Mangaka Kasumi Morino still does a great job with the characters who are expressive and lovable throughout. I like how Morino characterizes Aqua, Kazuma and Darkness as well and manages to keep their personalities in-line with what we’re used to. Throughout the series, Morino has brought attractive artwork and capable storytelling to the table; it’s just a shame that the final scenes weren’t a little bit more powerful.

If you’re a fan of Megumin as a character then you’ll certainly be satisfied with Konosuba: An Explosion on this Wonderful World!. Her adventure from the Crimson Magic village through to the town of Axel has been entertaining and never had a dull moment. Although this adaptation has been skipping some of the light novel content, it hasn’t hurt the manga at all. I think that’s where Morino’s skills have shone because although there was so much they chose to keep or remove, they’ve done a good job of keeping things coherent.

This release comes to the West thanks to Yen Press and has been translated by Kevin Steinbach. As always the translation reads well with no issues to speak of. Like previous volumes, there are also some colour pages included at the beginning of the book. If you do want to read more of this series then it’s worth checking out the original light novels, which Yen Press has been releasing into English.

Overall, the conclusion to Megumin’s story proves a little underwhelming after the content of Volume 4. However, if you’ve enjoyed the series so far then you certainly won’t be disappointed by how this tale comes to an end. If nothing else, we won’t be forgetting Megumin’s adventures anytime soon. 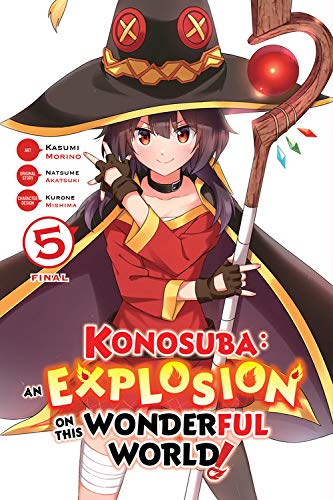 Title
Konosuba: An Explosion on this Wonderful World! Volume 5

Konosuba: An Explosion on this Wonderful World! Volume 4 Review

In this volume of Konosuba: An Explosion on this Wonderful World! Megumin and Yunyun are on their way to the town of Axel – but before they get there, the two must face off against a number of foes. With Yunyun stealing the spotlight, will Megumin ever be able to show off her explosion magic?