Last year I had the opportunity to review a strange title called Little Miss P. The manga offered a sympathetic and entertaining look at what it means to deal with your period. Now the series is back with a second volume and I’m here to find out if it’s still a worthwhile read.

Like the first volume of the series, Little Miss P: The Second Day is a collection of 7 individual stories revolving around women dealing with their periods. The stories this time are more varied in subject matter compared to the previous volume, but they don’t feel quite as focused.

The book starts off well with a story about a young couple taking a trip to celebrate their anniversary. They’ve both been looking forward to this trip for a long time (and the boyfriend Arata worked hard to save up enough money), but unfortunately, Little Miss P (the personification of a period in the series) visits girlfriend Sena just before they arrive.

Instead of asking Sena what she’d like to do, Arata pushes her into going down to the beach with him and eating shaved ice (something that causes Sena pain due to her period!) and the two ultimately have a huge fight. The chapter aims to illustrate how men (who don’t have to deal with periods) are often unsympathetic to their partners’ woes and in that regard it does the job well.

Then there is the more supernatural chapter revolving around humanity trying to survive a zombie apocalypse and women struggling to find pads. One powerful sniper encounters a young man whose wife passed away and is trying to figure out how to create pads to help the women in his survival camp. Together, the two team up to figure out how to resolve this issue and make everyone more comfortable while they fight off zombies.

After that, the stories shift the focus somewhat. One chapter features women talking to middle school kids about how periods vary from person to person and that they shouldn’t be shy about talking about it. While this is embarrassing for the boys in the class, the women hope that it educates them too and helps them understand when their friends or partners are suffering in the future.

I especially liked this tale since it wasn’t just about teaching the kids about the periods themselves, but also how the things that bring you some comfort while suffering can be so varied. For some people, their favourite food is a big help or heat pads or hot drinks. There is no perfect answer and that’s the message the characters are trying to get across to both the kids and the readers.

Other chapters focus on a couple of aliens trying to get pregnant and an overworked editor dealing with an ovarian cyst. These stories are interesting for being relatively unrelated to periods but still fit within the context of the series quite well. It’s nice to see a variation instead of the same thing over and over again.

On the whole, I wasn’t as invested in this volume of Little Miss P as I was in the first. The stories are good but just not as relatable, which takes away from them for me. If you liked the first volume then it’s certainly worth reading this one since there isn’t anything bad about it, it just doesn’t quite hit the same sweet spot.

Mangaka Ken Koyama’s artwork is still the same abstract style from the first volume. Nothing has really changed here with the artwork being quite barren and quirky, so if you liked it last time you won’t be put off by anything in The Second Day. I do appreciate how many different characters we meet and how uniquely designed they are (especially in the fantasy stories) this time around though, as in the previous instalment, everyone was quite similar to one another.

Little Miss P: The Second Day comes to the West thanks to Yen Press and continues to be translated by Taylor Engel. The translation reads well with no errors to note. The series is still ongoing in Japan with a third volume recently released, but it doesn’t appear to have been scheduled by Yen Press for an English release yet.

Overall, Little Miss P: The Second Day offers an entertaining and thought-provoking read on a difficult subject matter. While the novelty has worn off somewhat since Volume 1, there is still plenty to enjoy here if you were a fan of the previous instalment. 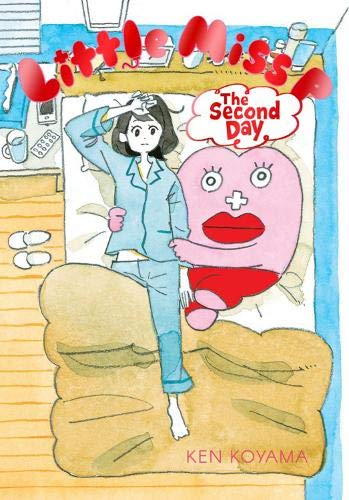