Since Yen Press started publishing Little Miss P back in 2019, we’ve enjoyed yearly visits to the series and its quirky mascot character. However, all good things eventually come to an end and that’s true here as well as the series reaches its conclusion in this fourth volume. Does it prove a satisfying send-off? Let’s find out!

As usual, this volume is a collection of short stories all revolving around Little Miss P or some other element of the reproductive cycle. There are 7 chapters in total this time around and we open with a story set in the far future where college senior Rina Araki is writing a thesis on the history of periods and wondering why they became such a taboo subject.

She begins to wonder if there was some big misunderstanding that caused people to look badly on women who were menstruating and that simply continued for years and years unresolved. Together with her friend Nad, they build a time machine to go back to an ancient period to see if they can get to the bottom of it…

Our second story brings us back down to earth and deals with a woman preparing to tell her daughter all about what periods are and she’s struggling to find the best approach. Does she tell her daughter the in-depth truth about what her body is going through and why or that it’s a special thing only women experience to make her feel more accepting of it? Or she could just tell her that they’re a plague upon womenkind and “a total pain in the butt”. Whatever happens, she doesn’t want to repeat the mistakes her mother made which left her feeling like this monthly event was something dirty and to be ashamed of.

The following chapters swap between fantastical and realistic stories as the book goes on. We find a scientist building a giant robot, stuck between pursuing her dreams and knowing the time for her to be able to carry children is slowly ticking away.

Then there are the three teenagers of the “Lie Down Club”, who spend their days laying down together and chatting about whatever comes to mind. When Little Miss P visits, they all support each other while wishing they could stay there together the whole time rather than having to stand up and continue their life while struggling through their monthly woes.

Perhaps fittingly, the series ends with a story about four women taking a trip together to celebrate reaching menopause. Together they reflect on their lives so far, both what they’ve accomplished and what opportunities they may have let pass them by. Ultimately the trip acts as the celebration and well wishes that the four wished people around them could offer them, none of them feels like they can talk to their husbands or families about it so this time together means they can let all their feelings out without reservation.

The story that feels the most out of place here is Chapter 5, which follows a model who ends up popular and attracts plenty of haters both on and offline. On the whole, this one isn’t really about periods so much as the harassment women often go through if they find themselves in the spotlight, although it does try to tie it in by talking about the fact this woman has been under so much stress that her cycles haven’t been regular. I still enjoyed the tale, but I couldn’t shake the feeling it felt out of place in the collection.

On the whole, I think Volume 4 of Little Miss P offers one of the better collections of stories we’ve seen in the series’ run. Although it leaned back into fantasy more than Volume 3, I think author Ken Koyama manages to straddle the line between fantastical and relatable fairly well. It certainly fares better than Volume 2, which was just too out there for readers to be able to form any kind of connection with the characters. This time around, because we have women from so many different age groups and walks of life, there’s something for readers of all ages.

Ending a series at Volume 4 may not seem like a lot to some of our readers, but these have been quite thick releases in terms of page count. I’m personally happy to see the author bring the series to an end here since throughout the last three volumes there have certainly been points where it felt like he was running out of inspiration. Although Volume 2 is the one that fared worst there, with Volume 3 and on getting back on track. We’ve already seen such a wide variety of storylines that I feel satisfied to see it conclude here before it gets too silly.

As previously mentioned Little Miss P: The Fourth Day comes to the West thanks to Yen Press and has been translated by Taylor Engel. The translation reads well with no issues and there are two pages of informative translation notes at the back of the book, further explaining some of the terminology and history that comes up here.

Overall, Little Miss P: The Fourth Day is another interesting collection of short stories revolving around the dreaded period and other associated issues women must contend with. If you’ve been following the series so far you’ll know what to expect and will enjoy this send-off for this strange but often fascinating manga. 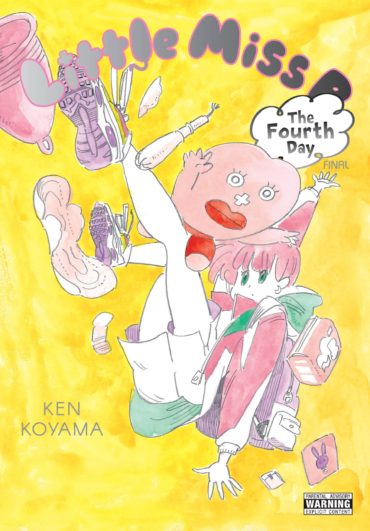