“The northern country. A frozen world covered in snow and forests, ice and rocks. Setting foot into this land, they find their own survival put to the test. In these snowy fields, monsters jeer. They are foe but also friend. Their lesson: In order to know life, one must also know death.” – 86 Volume 5

After a return to form in Volume 4, I was incredibly excited to read more of light novel series 86. After a fairly substantial break between instalments, the fifth volume has now been released and I’m eager to find out what’s in store for our cast.

At the end of the last volume, the Eighty-Sixth Strike Package led by Lena was given clues as to the whereabouts of Legion developer Zelene Birkenbaum. Chasing after their lead, the group have come to the United Kingdom of Roa Gracia who are offering an exchange of technology and hope for help reclaiming some of their lost lands.

Here in the United Kingdom the group meet the fifth prince Viktor Idinarohk, who is a prince in name only having given up his succession rights. Viktor is disliked by those around him, having meddled in the taboo to create the Sirins – The United Kingdom’s anti-Legion force.

Upon the arrival of Lena, Shin and the rest of their squad meet Vika and his personal guard Lerche who is also a Sirin. Straight away, Shin notices that something isn’t right about Lerche and Viktor explains that Lerche and the rest of the Sirins are humanoids. Neither fully human nor robot, the Sirins have copies of human brains inside them, allowing them to undertake more complex missions and battle strategies than those of the Legion (who also make use of human brains).

While Shin sees this as no different from the way the Republic of San Magnolia have used the 86 to fight their battles, Viktor assures him that no one’s brain is used for the Sirins unless they give their permission. Nevertheless, Shin and his team struggle to interact with the Sirins, finding them creepy and difficult to understand.

The Sirins just want to prevent any humans dying and becoming like them, something unable to grasp a future beyond fighting someone’s war. Shin and the Eighty Six can’t imagine making anyone else fight their battles and our protagonist in particular struggles with the idea of the Sirins dying in his or anyone else’s place. After all, they have personalities of their own, so what sets them apart from humanity?

Elsewhere in this volume, Lena is struggling with her feelings toward Shin. At the end of Volume 4, she grows frustrated with Shin’s reckless actions and how quick he is to put his own life at risk. Lena can’t understand his way of thinking, nor any of the other Eighty Six, and now she doesn’t know how to approach him. This has led to an awkward distance between them, the likes of which they’ve never faced before.

By spending time with Viktor, Lena gains a different understanding of how the Sirins and Eighty Six think. Slowly, she grows closer to being a suitable handler for these people who have gone through so much and faced so many horrors. She’s maturing in ways no one could have expected and it’s satisfying to watch this happen.

Both Viktor and Lerche are fantastic additions to the world of 86. While Viktor has a lot he can teach Lena, Lerche is someone that can understand and teach Shin. The Sirin understands why he’s reckless but wants him to learn there is more to life than throwing your life away in this fight against the Legion. They’re different sides of the same coin in both cases, ultimately.

Even away from what Viktor and Lerche can teach Shin and Lena, they’re fantastic characters in their own right. Viktor is seen by those around him as cold and heartless, but as the book goes on, we’re treated to his backstory exploring how he became this way. In certain ways he’s cocky and reckless, the kind of character you either become endeared to or hate. In my case, I warmed to him extremely quickly.

Lerche is a bit more of an enigma overall, but her devotion to Viktor is born out of something more than simply being her duty. Out of all the Sirins, she’s the most human and that, by extension, helps humanise the rest of the group. It’s an interesting thing because while she acts human and does want to do her best by Viktor, she’s also willing to sacrifice herself for the good of mankind.

Since Volume 5 of 86 is busy setting up the new Kingdom, the actual battle taking place feels less high stakes than usual. While I never feared for anyone’s life the way I have in previous instalments, the fight was still interesting. Lena, Viktor and the commanders of the fight get trapped inside a fortress of sorts, which leads to a siege battle between the Eighty Six, Sirins and Legion. So far the series hasn’t tackled this kind of fight, which makes this one an interesting change of pace.

If nothing else this book shows a lot of promise for the future of 86. The series can’t sustain itself on high stake battles alone; it needs places and characters the readers care about which this volume gives us.

86 Volume 5 comes to the West thanks to Yen Press and has been translated by Roman Lempert. The translation reads well with no issues to speak of. As always, this volume includes a selection of colour pages and a character index. I’d like to mention how much I like the front cover design (illustrated by Shirabii) this time around. It’s a fabulously eye-catching image and one of my favourite illustrations in the series so far.

Overall, 86 Volume 5 is largely preparation for much bigger things, it does introduce us to some fascinating new characters. The opportunity to travel to brand-new lands is also welcome and, coupled with the additions to the cast, proves a breath of fresh air. This series continues to be a must-read! 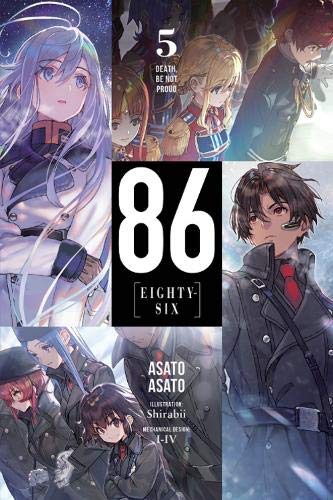