Volumes 2 and 3 of critically acclaimed light novel series 86 were a prequel story which lost the high stakes of the first entry in the series. Now we’re into Volume 4 which promises to be a return to form for 86 as we enter into a brand-new story with Shin and Lena reunited at last. Let’s take a look at what’s happening!

Having survived their last life-or-death battle, the Spearhead squadron has been turned into a special unit known as the Eighty-Sixth Strike Package, led by Lena, who is now part of the Federal Republic of Giad’s army.

With this new task force established, Lena is hoping to take in other Eighty-Six like Shin and his squad, helping to train them and rehabilitate them into a more normal life than the awful one they led in the Republic of San Magnolia. However nothing in life is that simple and with an awareness of the Eighty-Six spreading among the population, the group is already facing harsh racism.

The cast doesn’t have too long to deal with this issue though, as the Eighty-Sixth Strike Package is quickly sent on their first mission. Their goal is to explore an abandoned subway tunnel that is now a Legion base. It seems like a difficult but not impossible mission to begin with, at least until they discover what the Legion has been up to there…

This volume of 86 spends half its time catching us up with what’s been happening in the Federal Republic of Giad since last time and the other half on the Legion base mission. This makes it feel more like Volume 2 in tone since we spend so much time with Shin and Lena just talking about their past and now their future together. It’s extensive world building and character development that is sure to pay off later in the series.

We’ve barely seen Lena since the first volume of 86, but she hasn’t changed all that much. Perhaps the biggest difference is how attached to the Eighty-Six she has become since leading Shin’s group back then. Lena now feels frustrated by her inability to prevent anyone else dying while under her commend in the Republic of San Magnolia.

Shin doesn’t want Lena to feel responsible for the Eighty-Six who died under her command and does his best to reassure her that none of it was her fault. She couldn’t change the treatment they received in the Republic of San Magnolia and that’s okay. In turn, Lena works hard to make sure Shin believes he has a place to return home to and not to throw his life away on the battlefield.

Back in Volume 1, Lena and Shin worked incredibly well together and I loved their interactions, so I was glad to see that re-established here. Lena brings out a softer side of Shin compared to the tough, uncaring personality he normally projects. They make a good team and no matter what problem they face, they’re certainly better off together.

While the mission at the end of this volume is as dangerous and gripping as they always are in 86, there is a significant feeling that this volume is setting up for something much bigger. The things the Eighty-Sixth Strike Package find are undoubtedly going to be a problem later and that’s going to be the reason readers keep coming back to this series.

As the world develops, there is always something happening behind the scenes that you know will be explored later. A reason to make sure that these kids are going to be okay and fend off the Legion before the human race falls. Even in a volume like this where it’s largely set-up, that compelling feeling is still present.

Volume 4 of 86 comes to the West thanks to Yen Press and has been translated by Roman Lempert. The translation reads well with no issues to speak of. As usual, this volume includes a selection of colour pages depicting the cast and there is a character index, which comes in handy for remembering who’s who from volume to volume.

Overall, 86 Volume 4 proves a return to form for the series. With the reintroduction of Lena and a new team put together with her at the helm, this opens the door for a lot of exciting stories to come. While a large portion of this volume is set-up, the mission the Eighty-Sixth Strike Package embark on is still as gripping as ever. 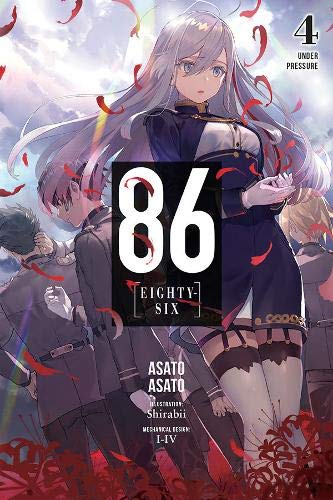